This is Marie with an article that contains no desserts at all, though it does have something that is nearly as yummy – salami. I didn’t like salami nearly as much before I got pregnant and swore off the stuff for a very long time. This article is about a place that is, as a result, nearly synonymous with salami for me. On our first visit, sometime while we were still dating, we stopped by this place mainly because it was across the street from a comic and music store that was dear to my husband’s heart, but now it is a destination to itself. Which is good, because the comic and music store moved to a soulless strip mall that probably has better rent prices and definitely has more floor space.

The motto of Noshville, a New York-styled deli, is “An eating experience, not just a place to eat,” and they do a good job living up to that. The deli area is at the front, where you could theoretically just order a pound of this and a half pound of that if you insist on not sitting down. Mostly, of course, it services the restaurant and catering customers. Although the place is really quite large (and needs to be, with the lines as long as they can be) the floor space is neatly divided up into separate eating areas by a bar and a couple of semiprivate rooms. 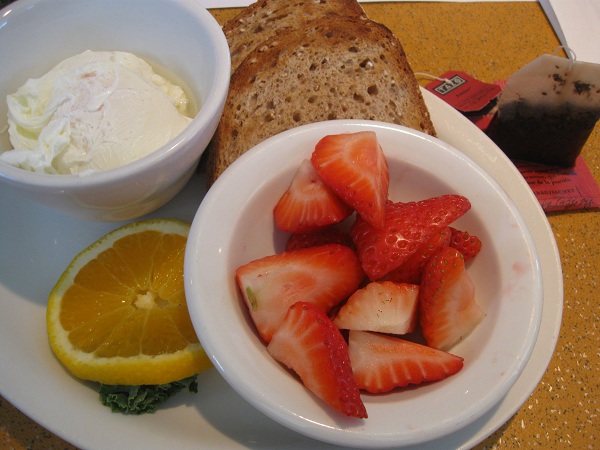 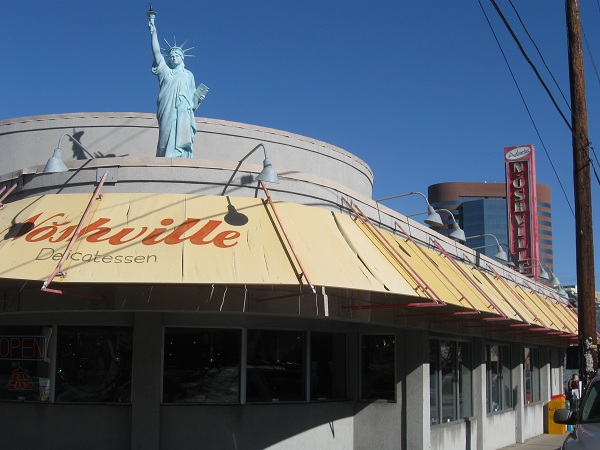 The menu is large and varied enough that I have very little trouble putting together my ideal breakfast as described in an earlier entry. However, the more usual breakfast selections are clearly very popular, and I passed a couple on our way to the table who were eating omelets that looked almost good enough to steal and run away with. But then we wouldn’t get to come back, and that would be bad.

Noshville has four locations in Nashville, though we have only gone to the Midtown one. That seems to have the best reviews, though, among them the delightful Dining With Monkeys, which comments on the pickle bar as one of their features. For that, I wish we’d brought our daughter, who is somewhat fond of pickles. As it was breakfast time, though, I passed it by without a glance. Those are really the best choice of green stuff of the options available, though who goes to a deli to have salad?

We have eaten there a good half-dozen times by now and never had an unsatisfactory meal, though I was considerably less taken with the celebrated hash than my husband was. One of these days we will have to visit on a day when we aren’t going to another place just before or after, so I can get some of the desserts without feeling bloated. We will probably continue making a point of stopping by to load up on salami on our way out of town, though. I’ve also had the roast beef and tuna melt, and maybe next time will try the liverwurst. Grant once had what appeared to be an orgasmic experience with a Monte Cristo. Definitely recommended.

Other blog posts about Noshville:

One thought on “Noshville, Nashville TN”