I don’t believe that I got quite as much out of our trip to Martin’s as I could have. It’s one of those very rare cases where I did a little research – if you can call it that – after the fact and found that there was so much more here than I knew, and that, had I been better informed going in, I would have gone from a very pleasant and tasty experience to a potentially even better one.

I first heard of the place when John T. Edge included it in his celebrated November 2008 article for Garden & Gun, “100 Southern Foods You Absolutely, Positively Must Try Before You Die.” Edge singled out Martin’s redneck taco, a pile of pulled pork and slaw on a cornbread “tortilla,” and I agreed that I needed to try that. However, I declined in the end, as the “taco” turned out to be a burrito-sized monster, and I would rather just sample the restaurant’s standard plate to get a feel for how they do their meat here. I figured that I’d order a brisket taco instead – much smaller, and about $2.50 compared to the huge redneck taco’s $8 – and get my fill that way. And, because I am a numbskull, in the sixty seconds that it took to move from the menu board to the window register, I somehow conspired to forget to order the brisket. 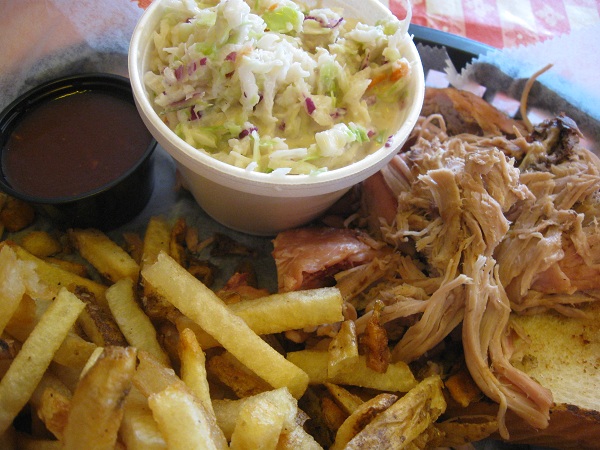 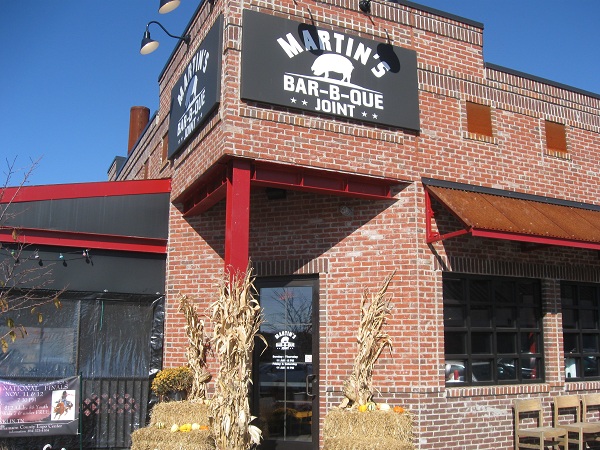 Martin’s is an extremely busy place. We arrived just after the church rush began and it was completely packed by the time we finished, proving, once again, that those barbecue places that choose to close on Sundays are just killing themselves missing business. I suspect that most of the guests were looking forward to watching a little football at noon central time, but this was the one Sunday of the season where CBS didn’t have a double-header, leaving all their affiliate stations scrambling for something else to fill three hours of airtime. The Nashville CBS station dusted off an ancient episode of Law & Order from way back when Richard Brooks was in the cast, and when Chris Noth was a baby. Not often you see that season on TV anymore, is it?

It’s a lovely drive down here. When I sent a wishlist to Brooke to put together an itinerary of sorts for where we might go eat on the Saturday, I had included Martin’s as a possibility, but when I looked at the map and saw that Nolensville is located a good twenty miles south of the city, in between interstates 65 and 24, I told her to never mind, that we’d make our way there on the way home. Of course, I’d never been out this way before, and it was just a gorgeous and relaxed little drive after we left the southern edge of the Nashville sprawl and found nothing but farmland and orange-colored leaves for miles and miles.

I had a pulled pork plate with slaw and fries, and thought everything was very good. They cook the whole hog here, as they do in the eastern Carolinas, and the pit really is a sight to see. I was a little disappointed that more sauce was not available, because the small cup that I had was really terrific and I couldn’t flag anybody down to get more. Would you believe that the red and yellow squeeze bottles on the table really were ketchup and mustard? I’ve become so used to barbecue restaurants using those for additional sauces that I was quite surprised to find them used as they were intended. Apparently, the sauce that came with my order was the “Sweet Dixie” style, which is a completely wonderful mix of sinus-clearing peppery zest and sweet zing, not quite thin enough to drink. I could have used a lot more of that, but it wasn’t until I watched the clip of the restaurant’s appearance on Diners, Drive-Ins and Dives that I was even aware that there were more sauces beyond the Sweet Dixie available.

(Strangely, I had no idea that Martin’s was ever on Triple D and wouldn’t have looked for it but for a curiosity from the evening before. When we were at Prince’s Hot Chicken Shack, I saw the autographed poster of Guy Fieri that appears regularly at establishments featured on his show. Once we returned to Atlanta, I looked for it at the Triple D fan site, Flavor Town USA. Prince’s was not listed, suggesting that if an installment has been taped there, it has not yet aired, but I saw Martin’s on the list instead. What a pleasant surprise!)

The interior design is really cluttered; beyond the fun and silly country & western music decor, which includes a framed ad for the short-lived JR Ewing Beer, there is so much signage for the food and the slogans and the T-shirts that it’s a little overwhelming. It’s a rare case of a restaurant offering too much for guests to take in. With the line out the door with after-church guests and loud Nashville standards being played at maximum volume – sadly, no, we weren’t quite able to make it out of middle Tennessee without hearing “A Country Boy Can Survive” – it’s pretty easy to hit sensory overload here. Stepping outside into the calm, blue, November sky was very pleasant after all that chaos.

We had quite a long trip home from there, thanks to the baby being very fussy. We continued south to TN-840, what I would call a “trucker’s loop” that currently connects Interstates 40, 24 and 65 southeast of Nashville and allows travelers to get from one to the other without hitting all the knots and tangles of those highways in the urban center. Along the way from Nolensville back to Murfreesboro on this road, you can briefly see the most remarkable home in the hills above and on your left. It looks like a huge, white castle and it is completely gorgeous. It was used as the location for Taylor Swift’s “Love Story” video and it’s called Castle Gwynn. Sadly, no, we weren’t quite able to make it out of middle Tennessee without a reference to Taylor Swift, either.

Three further stops on the way home were necessary to satisfy this hungry and cranky baby, and Marie and I learned the hard way that, when they are awake, babies don’t take well at all to the ear-popping atmospheric changes of high points like Monteagle. We had a terrific time in Nashville, and love our friends and love the food, but we’ve never, ever been so glad to get home!

Other blog posts about Martin’s: