Earlier this month, David and I took our every-other-month trek up to Chattanooga and McKay. We’d hoped to have David’s old friend Stephen join us, but he ended up having to work. It was a disagreeably long trip. When we go, we’re on a bit of a time budget to get back in time to pick up my son from day care before he hits the “you’ve been here too many hours!” alarm. Between missing the exit for our first meal destination, necessitating a lengthy detour, the unhurried service at that place, and the agonizing wait for McKay to price the gigantic stack of CDs that David brought to sell – two hours!! – we found little time to relax at the two restaurants where we visited, and no real chance to talk with staff or owners to learn much about them. This, sadly, was a case of eating and running.

Part of the problem is that Google Maps is still hopelessly confused about how to navigate exit 178 on I-24. Seriously, if you think that you might need either US-27 or TN-58 in Chattanooga, at this point, I’d recommend using some other service to get better directions, because if it turns out that you do need that exit and miss it, it’s a real pain in the neck to turn around. That said, travelers from Atlanta or parts east will use this exit, like they’re going to the Incline Railway, if they want to sample the food at The Purple Daisy Picnic Cafe. It’s owned by Lisa and Tony Davis and opened in 2005. They have the rumblings of a good reputation for the quality of their pulled barbecue pork, but since David and I would be visiting a barbecue joint in just a couple of hours’ time before leaving town, we each tried one of their other signature items, an incredibly neat triple-decker sandwich called a Rainbow. 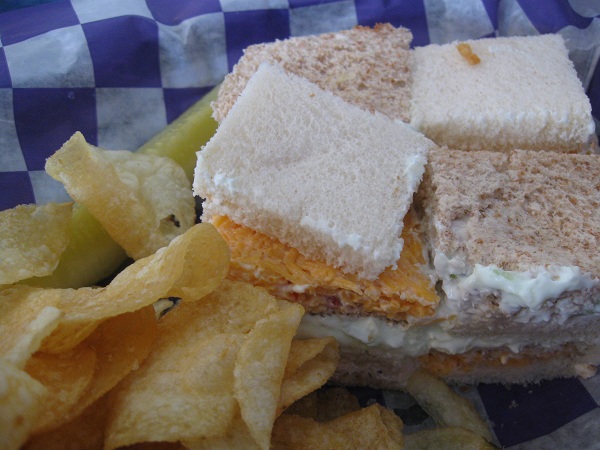 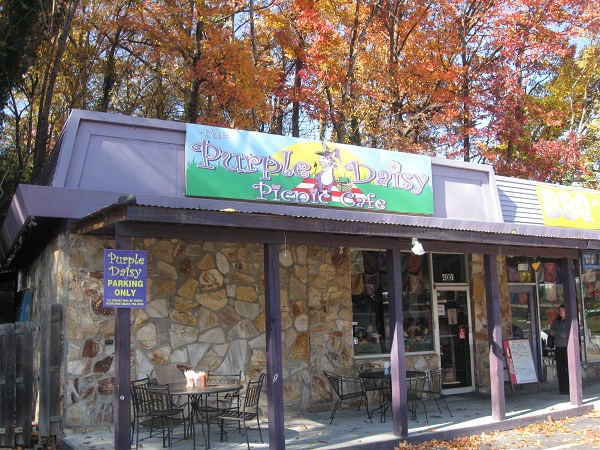 The Rainbow is a really neat little sandwich, and I think it would be fair to call it a little frou-frou. Between three slices of bread, crusts removed, it includes pimento cheese, cucumber spread and chicken salad. The result is just a fantastic little mix of very different flavors. David and I each enjoyed it a great deal, and it suggests that even better things might be found on the menu.

I have to say that I was not mad about the chili, which was quite thin and didn’t have any feel of personal oomph to it. The hashbrown casserole, which went with the sandwiches even better than the heaping handful of yummy kettle chips, was a much more successful creation. This is quite a good little restaurant, and one that I would like to visit again to try the barbecue.

(Incidentally, the Purple Daisy is across the street and catty-cornered from a pizza place called Mr. T’s. I pity the fool who does not recognize the giant ice cream cone sign out front that marks this location as a former Kay’s Kastles ice cream parlor. More about this at some point down the road.)

Speaking of barbecue, we dashed in and out of a little place on Ringold Road that I had spotted a few months previously and had a very good snack on our way home. It’s called The Hickory Pit and it’s in a really neat log-framed building that might be older than the business. The teenaged girl working the register said that she thought the restaurant might have opened “a long, long time ago. Wow, it’s always been here. Since the eighties.” It’s always humbling to listen to teenagers and their incredibly different perspective on what constitutes a long, long time ago. 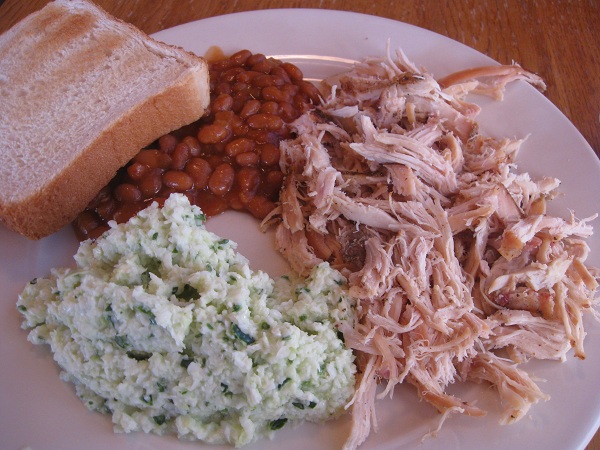 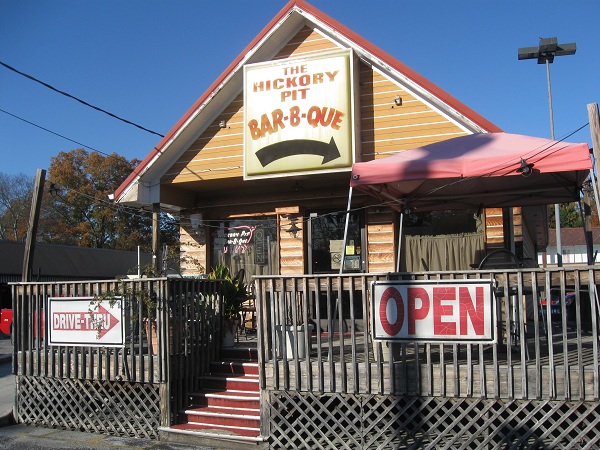 David ordered a chopped pork sandwich and I had chopped chicken for a change, with beans and slaw. The meat was smoked well and pretty dry; it really wanted some of the sweet brown sauce to make it a little more to my taste. The slaw was really terrific.

I was a little discouraged by the inclusion of – dear heaven – “freedom” fries on the menu, but this was otherwise a thoroughly decent detour in a nicely-designed restaurant with plenty of neat things on the wall to look at, ranging from a local newspaper report of President Roosevelt’s death in Warm Springs, Georgia to a collection of old soda bottles. In this case, I chose to get mock-hurt by one of the bottles and bemoan the late hour and how we really would not have time to stop by a Bi-Lo for more Double Cola before flooring it out of town. I got some excellent sweet tea to go and we made tracks for home, wishing that McKay had not taken quite so long to process all those cast-offs of David’s. At least Hickory Pit was on the way home so that we could stop there at all, and I did not pick a place in Ooltewah or Cleveland! Hopefully, the next trip to Chattanooga, the restaurants that we pick will be places where we have a few more minutes to linger.

6 thoughts on “The Purple Daisy and The Hickory Pit, Chattanooga TN”