We had a really fun treat on our way home from Saint Simons Island. We stopped in for a couple of hours at the Savannah Children’s Museum, one of five properties around the city that are “powered” by the Coastal Heritage Society. It and its site neighbor, the Georgia State Railroad Museum, are set up in the remains of an old repair facility for the Central of Georgia Railway, most of which was built in the 1840s. At present, the children’s museum is almost entirely outdoors – so dress accordingly and bring sunscreen and water! – but they are hard at work fundraising for a mammoth facility within the to-be-renovated walls of one of the huge ruins. They utilize the open space extremely well, with a simple maze, slides, painting area, costume alcove, and a beautiful garden. This is absolutely one of our all-time favorite children’s museums and we enjoyed playing here a lot. Travelers, bring your kids and make a morning of it here!

When we finished playing, we drove out the same direction that we had gone when we were in town three days previously, and took the Islands Expressway as far as the junction with US-80 on Whitemarsh Island. A stone’s throw from that exit back along 80 will see you at Wiley’s Championship BBQ, and man alive, is this place ever named well. Not only have Wiley and Janet McCrary been winning competitions for decades all over the country, the pulled pork that you can get in their restaurant, which opened in 2008, is downright amazing.

Wiley’s also received some national news recently. In May, Trip Advisor released their fight-starting ranking of the ten “Best BBQ Spots” in America, the same list that got many people in Texas and North Carolina’s noses out of whack for noting, correctly, that Georgia is the best state for barbecue overall. We’ll note that somehow, Alabama didn’t make their top ten at all, and therefore this might not be the most sensible list ever compiled. Anyway, we had only visited one of their top ten restaurants – Hickory Pit Bar-B-Que in Chattanooga (which, while good, isn’t even the best barbecue in Chattanooga, never mind Tennessee overall) – and none of the three Georgia representatives on the list, so I decided that we should rectify that on this trip. 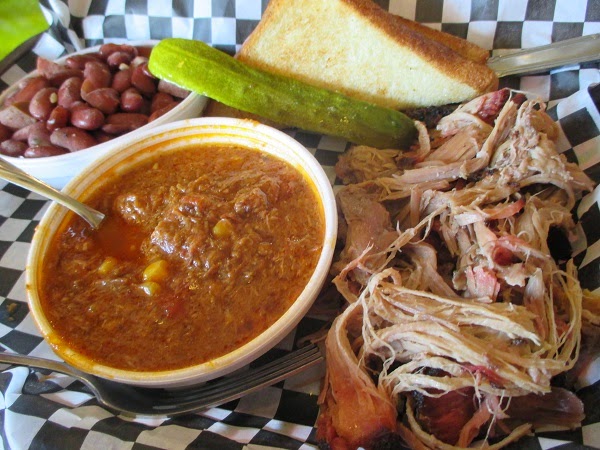 Over the weekend, we’d made two stops at Southern Soul on Saint Simons for carry-out (once for a snack and a bottle of sauce, and a second trip for lunch for the family) and that place is as excellent as ever. But it’s one thing to go to a restaurant knowing that you’re going to be as wowed as usual, and another to go into a place with a slightly raised eyebrow over the hype from a source that you don’t completely trust and get knocked on your backside by a meal so darn good. This really was a completely terrific lunch!

The meat, smoked in a steel trailer for ten hours over a mix of hickory and pecan, comes out perfectly moist, tender, and very smoky, and they serve up a good mix of bark on the plate. I also enjoyed a cup of red beans and rice – not nearly enough barbecue joints have that on the menu – and some completely amazing stew, with a very robust flavor. Flatly, this is some of the best stew in the state. We were all very pleased with the pulled pork, and the other sides that we tried, including some gooey mac and cheese and the aptly-named “Best Beans on the Planet.” I was amused by the claim, but darned if I can come up with anybody else who brews up such a savory mix to warrant the title.

There were four sauces on the table, all of them winners. With good reason, the McCrarys have been winning praise for their “St. Louis-style” red, ketchup-based “Better Than Sex” sauce, available in both a gently sweet and a spicier, tangier variety. This was joined by a quite hot pepper sauce. This is not like a traditional barbecue sauce at all, and nor is it advertised as such; it takes the place of those bottles of, say, Tabasco or Texas Pete that you occasionally see at restaurants. They also make an eastern NC-style vinegar-pepper sauce, oddly called a “mountain sauce.” I enjoyed all four.

The service is very attentive, but also very speedy, because there’s a high demand for tables here in the very small space. If you’re curious to try Wiley’s, and you assuredly should, we’d recommend going well outside peak times, or right as they open, as we did. Also bear in mind how dadgummed hot Savannah can get in July. We were ready to get back in the car, and then Marie couldn’t find one of our bags. It turned out that she had packed the bag inside the cooler, but we were briefly distracted by the possibility that some important stuff had been left at her mother’s house, ninety minutes away, and were sick of standing outside, and so we forgot to take any snaps of the building or sign. That’s okay; as the links below show, this restaurant is quite well documented already. Go visit our fellow hobbyists’ blogs to see what it looks like, and then go eat here. You won’t regret it!