Aha! I knew that TripAdvisor list would demonstrate a hiccup eventually!

You remember all the hoopla, right? TripAdvisor said, correctly, that Georgia was the best state in the nation for barbecue, and that we were home to three of the ten best barbecue joints in the country. Texas and North Carolina, after collecting their jaws from sawdust-covered floors, bitched and bellyached and those of us who know better smiled and said, “Darn right.” Then Marie and I went to Wylie’s Championship BBQ in Savannah, one of those three prize-winners, and just got knocked off our chairs by how good it was.

Also on the list: Joe’s BBQ in Blue Ridge. It had actually been on our radar a couple of autumns ago – we ended up at the nearby Pink Pig in Cherry Log on that trip instead – but our buddies from Friday Date Night stopped by in January and had a good meal here. So my expectations were pretty high, and I’m afraid that while this is a good stop, and I did enjoy this more than the other barbecue place in town that we’ve tried, I’m forced to raise an eyebrow at TripAdvisor over this one. This is certainly good, but nowhere near as argument-settling as that visit to Savannah.

Case in point: Marie really liked this place a whole lot more than I did. Mmm-hmmm.

So one Saturday last month, we took a short trip up this way to pick some apples, and detoured as far as Blue Ridge to be here when they opened. It’s incredibly easy to find, and has a nice little space for outdoor seating. The weather was gorgeous. 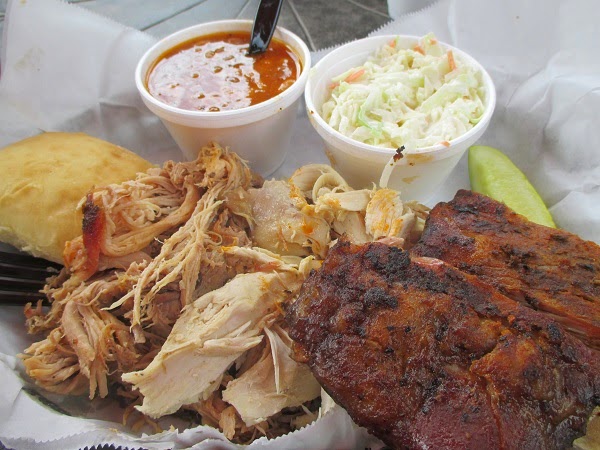 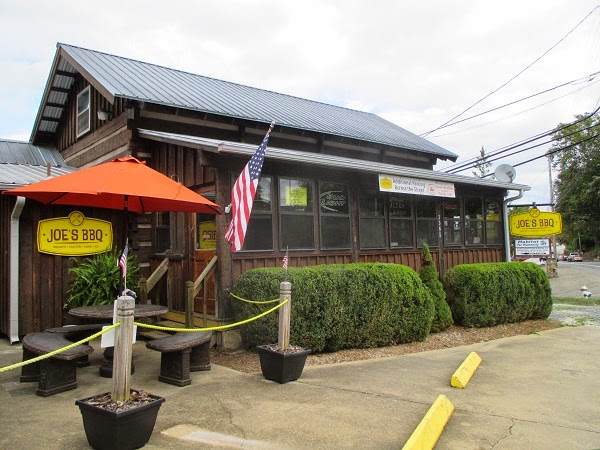 In Joe’s considerable defense, you get a heaping pile of food for a very reasonable price. Marie ordered a pulled pork sandwich, and the three year-old had a hot dog, and I got the combo platter, with more than enough food to share. The combo comes with ribs, pulled pork and chopped chicken. The chicken is just a little dry, which is to be expected, because that’s awfully tricky to smoke, and the pork – good heavens, there seemed to be no end to how much they gave us – was flavorful. The ribs are of the “falling right off the bone” variety, for those of you who enjoy such a thing. We got a kick out of the three year-old requesting more “meat on a stick” after a bite.

My favorite among the four sauces available was the Mom’s sauce, which reminded me of a middle Georgia vinegar-mustard blend. There was also a Mom’s Hot, which tasted like the original mixed with Texas Pete, and didn’t do the pork any favors. There’s a more traditional brown sweet barbecue sauce as well and a spicier version of that.

Marie was very pleased. She loved the flavors of the meat and wondered what on earth was wrong with me that I wasn’t also crazy about it. And I agree that it was good, but perhaps I was distracted by the promise of a snack a little later on, and just didn’t think that it was great. It might be the best barbecue in Blue Ridge, and certainly worth a visit, but there is a little place a few miles down the road that I have enjoyed much more… and it’d be just my luck if that turned out to let me down in a few hours’ time, wouldn’t it? Stay tuned…!