Revisiting Kay’s Kastles has reconnected me with another part of my past, and, reading up on the very small ice cream parlor, I’ve learned a lot about this very old company, and how its fortunes have withered so badly. There is only one Kay’s Kastles store left, north of Chattanooga up US 27 in Soddy-Daisy, and it is a shadow of its former self, but I’m so glad that I stopped by to say hello to an old friend.

Once upon a time, this was a great regional treat, and millions who grew up in the Tennessee Valley and either side of Lookout Mountain remember it fondly. The business began in 1934 in Chattanooga as Kay’s Ice Cream. It was started by a fellow named Frank Kollmansperger, who had previously worked for other creameries in the region. Back in those days, of course, long before national branding and distribution, milk, butter and ice cream were very much local things, and the original store on Brainerd probably sold more packaged “slices” of ice cream for home iceboxes than they did treats on cones.

In time, Kay’s Ice Cream grew to a pretty large area. They were in Knoxville in 1936, and in Roanoake, briefly, by the late 1940s, but soon contracted back. In 1956, Kollmansperger took on a partner in James Blevins, who wished to reopen the dormant Knoxville facility, and became part-owner of operations there. Around this time, Kay’s opened new stores in the towns of Soddy and Daisy, which would later merge into one municipality, and it must have been then that they opened stores in Alabama for the first time. There was certainly one store in Gadsden, and possibly one in Huntsville as well.

In the early 1960s, however, Kollmansperger and Blevins ended their partnership, and their sales regions were marked off. The Knoxville-area stores retained the Kay’s name, while all stores south of the town of Cleveland, Tennessee became Kay’s Kastles. Kay’s Ice Cream does not seem to have expanded too far outside of Knoxville. There were, possibly, stores in Johnson City and Bristol at one time. For many years, only two remained. One was in Maryville, a town about ten miles south of Knoxville, but it closed in 2007. The last remaining Kay’s is on the Chapman Highway, on US-441 on Knoxville’s east side, on the way to Seiverville. I have kicked myself so hard to learn this. In November 2008, Marie and I drove up this highway and we must have blown right past the place without seeing that iconic sign.

Ah, yes, the sign. Meanwhile, south of Knoxville, Kay’s Kastles continued their small growth, with stores across northern Alabama, middle Tennessee and northwestern Georgia. There were two stores in Rome, and what I remember most about the ride home from visiting my father’s family in Fort Payne throughout the 1970s and 1980s was stopping in Rome for ice cream at one of those stores. The sign was magnificent, a huge, fiberglass cone with five or six scoops of ice cream. My brother and I would lean forward in our seats – belts?! Kids didn’t wear seat belts in the seventies! – gripping the backs of the front seats, wide-eyed and unblinking, hoping to be the first to spot that sign, to shout “There it is! Kay’s Kastles! Stop, Daddy, stop!” after silently praying all the way from Coosa to Rome that we’d been good enough to warrant a cone.

I was similarly wide-eyed as we drove up Dayton Pike toward Soddy-Daisy looking for that giant cone. It wasn’t there. I spotted the green of the sign from a third of a mile away, but the huge, fiberglass ice cream cone was not there. The poor fellow who was working the register, and who is probably asked what on earth has become of their sign about twice a week, explained that this location was one of the few that never actually had the big fiberglass sign. The power lines outside prevented one from being erected sixty-odd years ago.

An even bigger shock awaited us. When I began looking into what I could learn about Kay’s Kastles, I had thought that all of those years of my childhood, I had been eating an ice cream produced in-house. It turns out that was not the case. Prior to 1970, it was, but Kollmansperger actually sold the creamery to Mayfield that year, and they distributed their product in Kay’s Kastles packaging for instore sales. Apparently, there were two or three special blends that Mayfield continued making exclusively for Kay’s Kastles. One of these was grape, which my mother remembered. When I told her, a couple of months ago, that I had found a Kay’s Kastles in Soddy-Daisy, she resolved to go sometime and get a grape milkshake like she always enjoyed. But when Kollmansperger passed away, the recipes apparently went with him, and Mayfield no longer makes them. Every so often, the same woman who reprimands me for swearing reminds me where I got it from. When I told her that she need not bother making the trip to Soddy-Daisy for a grape milkshake, people two counties over reported the cussing. 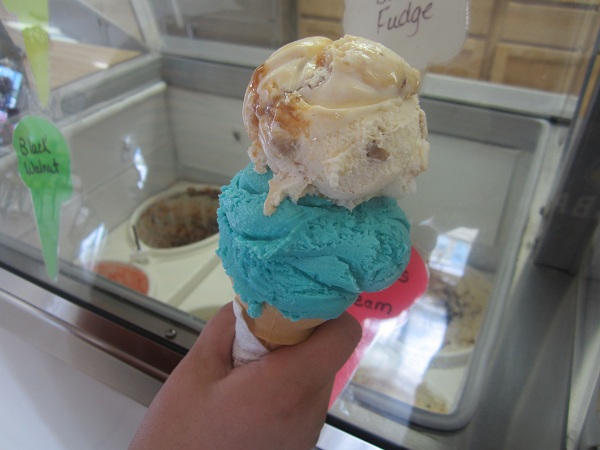 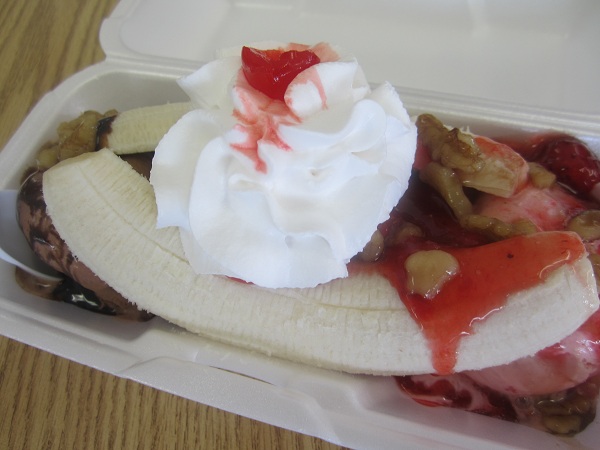 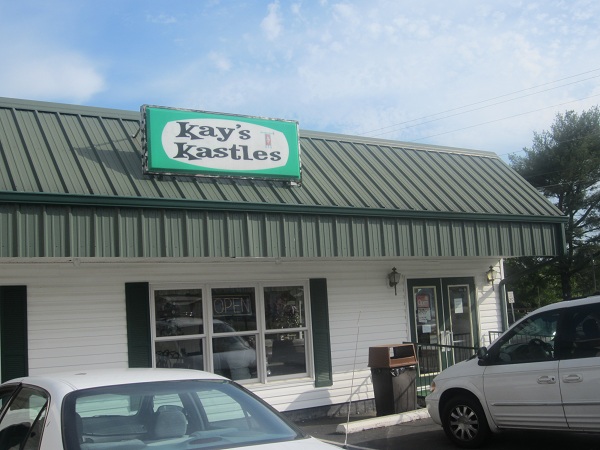 With that in mind, I’m very sad to say that there’s limited reason to go this far out of the way for what’s effectively the same Mayfield ice cream available in your grocer’s dessert freezers. The staff will certainly make it worth as much of your while as they can. They’re very friendly, and their prices are remarkably low. I mean, there’s not a blessed thing in the world wrong with Mayfield ice cream, and there’s no way you can find a banana split this good for under four bucks around Atlanta, but Soddy-Daisy is just a really long way out of the way for it.

On the other hand, if you did grow up in the Kay’s Kastles region, and fondly remember those stores, then the nostalgic rush is undeniable. They even feed it with a little display on the front wall, with framed copies of the newspapers that announced the Kay’s stores coming to Soddy and Daisy in 1955, and one of the old yellow half-gallon tubs of Kay’s Kastle ice cream that, in the 1960s, you could buy in this building.

That monstrous double-scoop in the first photo above, by the way, is, of course, what my teenage daughter ordered. While Marie and I shared a sensible banana split, the girlchild came up with mixing bubble gum flavor with pralines and cream. Every so often, it’s good to be old enough to not want something so ridiculous.

Anyway, while the good people in Soddy-Daisy have never had the big fiberglass cone in front of their store, a business down the road in Chattanooga’s St. Elmo neighborhood never took theirs down. Some years after this Kay’s Kastles store closed, a guy who wanted to open a pizza place agreed on the building and said that the sign was so fantastic that it would be wrong to demolish it. So he decided to sell ice cream as well. 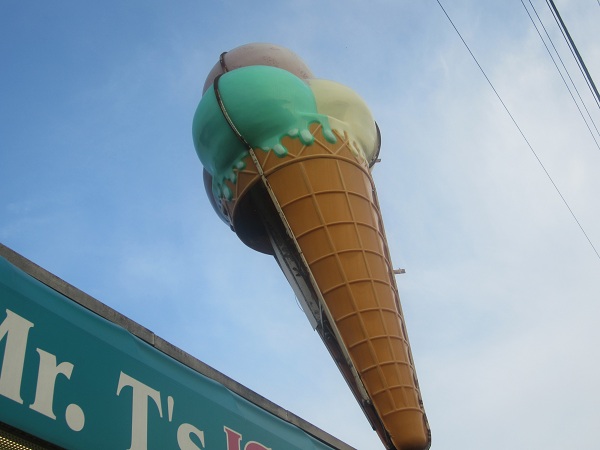 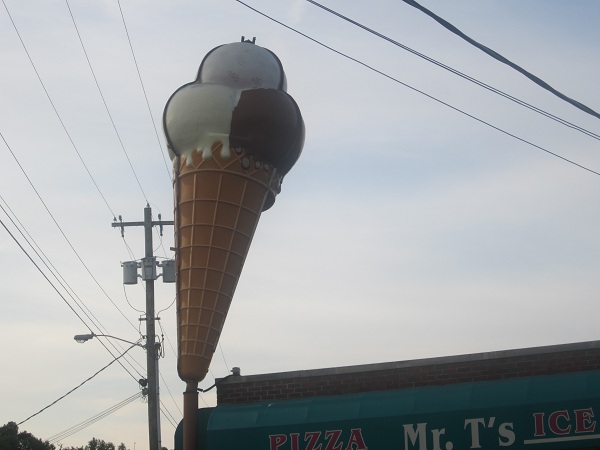 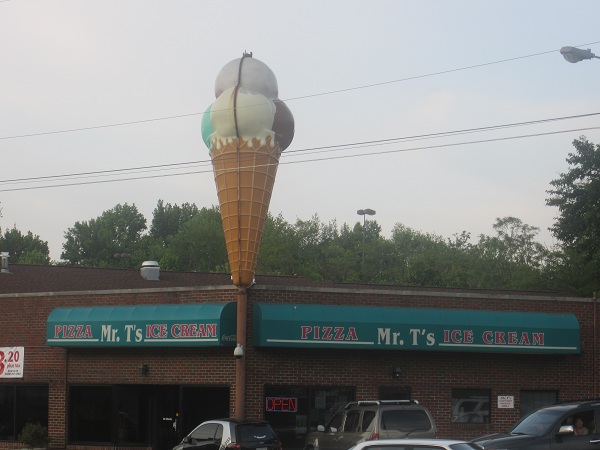 This Kay’s Kastles store had been one of the most brilliantly-located of all of the ones in three states. It’s literally right across the street from the Incline Railway, one of the city’s biggest tourist attractions. Even as downtown Chattanooga fumbled and decayed in the 1970s and 1980s, the Incline, Rock City and Ruby Falls were still packing in crowds. How in the world this Kay’s Kastles managed to fail with the darn Incline right there, I cannot imagine, but Mr. T’s Pizza and Ice Cream seems to be doing good business. The desserts here, incidentally, are not from Mayfield, but instead from Blue Bunny.

The St. Elmo neighborhood has been on an upswing for a while, anyway, so it’s natural that Mr. T’s should be doing better business than that Kay’s Kastles had been doing in its last days. The community is perhaps not quite as alive and vibrant as the city’s North Shore, but is home to several neat, independent restaurants, including The Purple Daisy Picnic Cafe and one of the city’s three Mojo Burrito locations. This is a local chain that I would like to visit the next time that I’m in town.

I’d also like to visit that last remaining Kay’s in Knoxville, should the road ever get me back up there. For many years, the Knoxville Kay’s were also buying their ice cream from another source, but in 2007, they resumed local production, and sell Kay’s brand ice cream both in that Chapman Highway restaurant and in Food City grocery stores. I am not sure when the road will again take us back to Knoxville – the closure of Book Eddy, mine and Marie’s all-time favorite used bookstore, was an awful discouraging blow – but when we do, we will definitely go by Kay’s.

Note: It’s sort of understood that with any little blog post like this, the writer grabs a little here and there from many sources and nobody really credits each other, because this is miles removed from academia. However, the level of detail in this chapter would not have been possible without the hard work of John Shearer, whose 2007 article about Kay’s for the Chattanoogan newspaper is available for you to read. My thanks to Mr. Shearer for conducting all those interviews and sparking so many memories.

With that in mind, we would certainly love to know much more about the range that Kay’s Kastles expanded through in the 1960s and 1970s. Did you grow up in a town with either a Kay’s Kastles or a Kay’s? Can anybody confirm whether Huntsville had a store? A Google image search will bring up many more photos of that terrific sign, but do you have any of your own to share? Leave a comment and let us know!