For the last stop on our trip through the land “from Soddy-Daisy to Sand Mountain,” we pulled over in Dalton for the first time in more than two years of blogging. We have registered on the Urbanspoon Dalton leaderboard already, because, strangely I’d say, that service registers a giant, sweeping expanse of the northwest Georgia mountains, from Summerville to Ellijay, as one metro area. Despite the fact that Dalton is smaller than Rome, which is unincorporated in Urbanspoon and registers simply within the general Urbanspoon Georgia heading, all of this sparsely-populated expanse of beautiful mountain country is all called Urbanspoon Dalton, and our visits to nice mountain restaurant getaways have logged there.

We took the long, long road to get here, as well. After a late afternoon snack at Kay’s Kastles in Soddy-Daisy, we drove back down US-27 to Chattanooga, and then back up the other side of town, up I-75 to McKay, the fantastic used bookstore where we have found so many treasures. About an hour later, evidently because we just felt like driving all the heck over Hamilton County, we went back to the city and the St. Elmo neighborhood to photograph the Mr. T’s building, but Marie said that she really wasn’t hungry for supper yet. So we got back on the interstate and figured that once we got to Dalton, we could get a recommendation from somebody and roll the dice.

Isn’t this astonishing? We ate somewhere without an internet subcommittee investigation. Crazy, I know.

We pulled over to fill up at the RaceTrac at the northernmost Dalton exit, and a staffer suggested Miller Brothers, ten miles south at exit 326. This is actually the business’s second location. The original restaurant is actually much closer to that gas station, but the more distant store, on US-41 where it is named South Dixie Highway, is much easier for interstate travelers to quickly hop off and visit. My BBQ Blog stopped by in 2008; I can’t find any other active blogs who have documented this place, which is ridiculous. It’s one of at least a half-dozen that are just a hop and a jump from I-75 and not nearly enough people are checking out the places in this region. 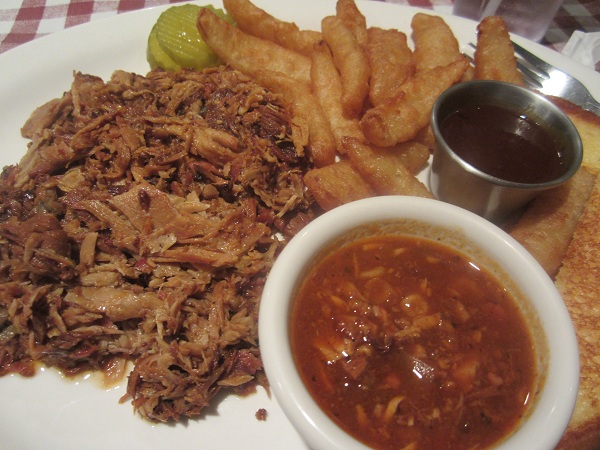 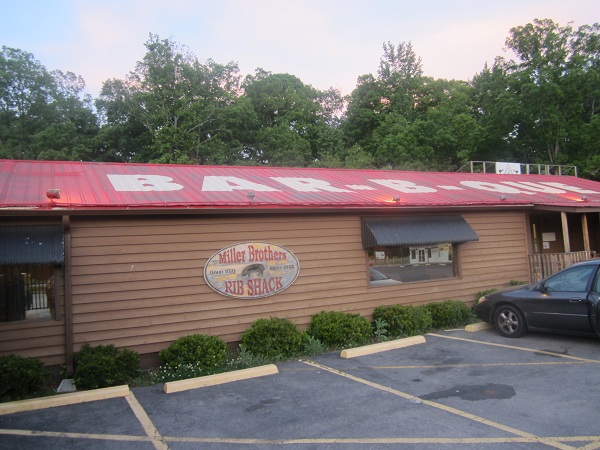 We arrived shortly after 8, and the business was far from hopping. There were only two other fellows at a table, which was nice, as the baby was keeping us busy with feeding demands and diaper demands. At this point, we were all pretty tired – both the trip to the children’s museum and the detour back to St. Elmo’s were unplanned detours and we left that morning assuming that we would have been home before the time that we arrived at this restaurant – and so we didn’t really engage and learn much about the business.

I understand that they’ve been around for thirty years and have built up a darn solid reputation among some of the locals. Marie and I each had chopped pork, which comes pre-sauced, and we certainly enjoyed it, but we also would have preferred it dry so that we could taste it better. The sides were mostly quite good. The nearest thing to a joker was the Brunswick stew, which was thinner than I like, but I enjoyed everything else. The onion peels were really good, and the potato wedges that my daughter ordered were just super. Even for the end of a slow day, everything was quite nice, and we left wishing that one of us had ordered the ribs instead, as this is where the Miller Brothers are said to shine the brightest.

This will, actually, mark a turning point for me. Going forward, if we visit a new restaurant that calls itself a rib house or a rib shack, then I am ordering ribs. Period.

The staff stayed a couple of minutes late as we slowly finished our good meal. I appreciate their accommodating us. Marie, exhausted, left the driving to me and we finished our road trip several, several hours behind schedule.