Earlier this year, while looking for some background information about the Kay’s and Kay’s Kastles chains – see our post about the lone remaining Kay’s Kastles, north of Chattanooga – I came across a really fun site called Roadside Architecture, whose owner has a great hobby that we can all appreciate: driving all around the country taking photos of silly old signs and novelty architecture. That sounds like too much fun for words.

Digging around her site, I learned that there was another old Kay’s Kastles sign still in use. Just as Mr. T’s in Chattanooga kept the old giant ice cream cone, another can be seen at Ice Castle in Dalton. This became a must-stop on our way back from town, having successfully obtained several new kids’ books for the baby at McKay. Google Maps sent us the silly way, but it gave us the chance to see what there is to see should you exit three miles north of Dalton’s main thoroughfare, Walnut, and loop around east of the city. Sadly, the answer would be “apparently nothing.”

At any rate, we spotted the unmistakable ice cream cone after a few minutes. 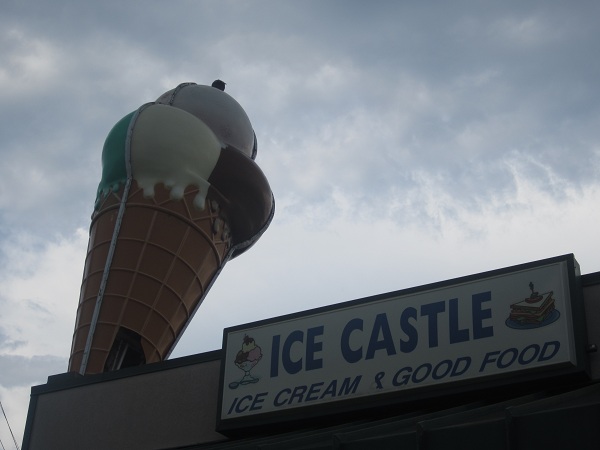 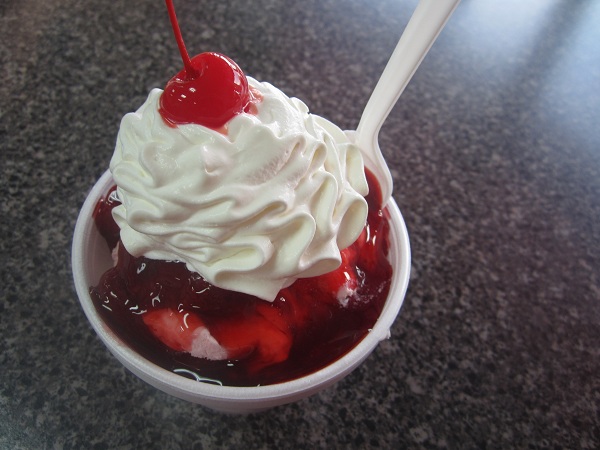 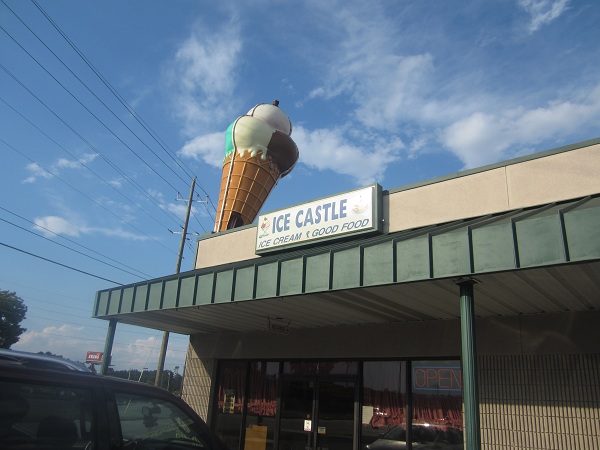 The owner, Cindi Brown, was not in when we stopped by her restaurant, and the girl working the register was unsure where the sign came from, so I phoned her a few days later to get the story about her scoops. She told me that the present location was not actually originally a Kay’s Kastles. Dalton did indeed have one in the 1960s and 1970s, but at a different strip shopping center. It closed down and the giant ice cream sign found a bizarre new home laying in a field somewhere.

In the early 1990s, Annie Talbot and her husband bought the old sign and attached it to its present home. Their place, called Annie’s Scoop & More, did not last but a few years before they sold it to Mrs. Brown in 1997. She gave it a new name that evoked the klassic Kastle’s brand, and has been serving up gigantic scoops, along with sandwiches and other deli treats, quite successfully for fifteen years.

Ice Castle serves up Greenwood brand ice cream, so it actually appeals to me more than the remaining Kay’s Kastles, which serves Mayfield instead. I’m aware that Scottie Mayfield, president of that company, probably doesn’t see eye to eye with me politically. That’s fine; many very good men and women don’t. But Mayfield ran such a nasty, negative, hateful, and ultimately unsuccessful primary campaign against incumbent Republican Chuck Fleishmann in Tennessee’s 3rd District this summer that it has tarred the legacy of his company’s ice cream with me, and I’d really, really rather not pay for any more of his food.

And they do not scrimp on the portions at Ice Castle. I had a Cookies and Cream malt, and there was barely any room in the mixing cup for the milk, leaving an incredibly thick shake behind. Marie had a sundae and our daughter a three-scoop cup and neither of them could finish. We got astonishingly good value for money here, and recommend guests order accordingly! It is not right off the interstate, but rather a straight shot about seven or eight minutes’ drive east of I-75. If you are traveling through Dalton and would like a sweet snack, you will find far worse out there, and so we really recommend these good people to you.

As mentioned in a previous chapter, we got a very late start on our trip to Chattanooga, in part because I got very, very little sleep the night before. Marie was good enough to take the wheel for the hour or so drive home, and I enjoyed a nap. We still made it back before the sun went down, but took it easy the rest of the evening. We were quite full and the baby had a very full day. All told, that was an excellent day trip. If you’re in Atlanta and have young ones, what are you waiting for?

As mentioned in the earlier post on the subject, we would certainly love to know much more about the range that Kay’s Kastles expanded through in the 1960s and 1970s. Did you grow up in a town with either a Kay’s Kastles or a Kay’s? Can anybody confirm whether Huntsville had a store? A Google image search will bring up many more photos of that terrific sign, but do you have any of your own to share? Leave a comment and let us know!