As part of revisiting childhood memories, I was happy to share stories last year about the last remaining Kay’s Kastles in Soddy Daisy, Tennessee, and its distant relation, Ice Castle in Dalton, Georgia. You should probably read those before continuing; it’ll save me having to recount the history of the chain. As I wrote both chapters, I looked forward to finding a chance to visit Knoxville and see the last remaining Kay’s Ice Cream store.

Marie and the baby and I finished up at Cardin’s Drive-In and made our way back to the city. An amusing hiccup got in our way. The whole drive up to Dayton, I had my fingers crossed that Google Maps would not give us any back road / detour shenanigans, because I knew that my impatient daughter, who was helping me navigate, was pretty likely to melt down and start yelling if the directions were out of date. I breathed a long sigh of relief when we actually got to the hotel, as all of the directions were just fine and we had no trouble following them. Would you believe that it wasn’t until my daughter was visiting her aunt that Google broke down and failed us? We knew that we’d have a detour around the ongoing bridge construction on Chapman Highway, but this fool maps program had no clue what it was supposed to be doing, and sent us the wrong way. All the while, the TDOT had clearly marked the correct route with impossible-to-miss orange signs which we should have followed. Stupid Google.

Anyway, once we accepted that people who actually live and work in Knoxville probably know how to get around better than Google does, we saw the unmistakable sign of Kay’s ahead and on the left. This side of the city lost one of the best reasons to visit when the Book Eddy, our favorite used bookstore on Earth, closed, but there is still a good comic shop, and the Disc Exchange, and stone me, there’s another record shop, Basement Records, on this stretch of road. And there’s that wonderful giant ice cream cone, calling in commuters. 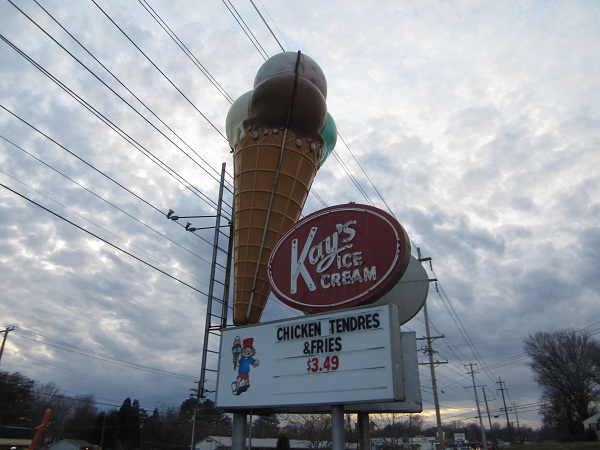 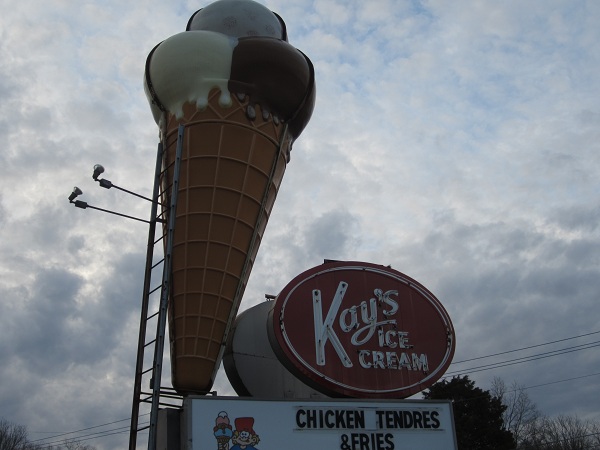 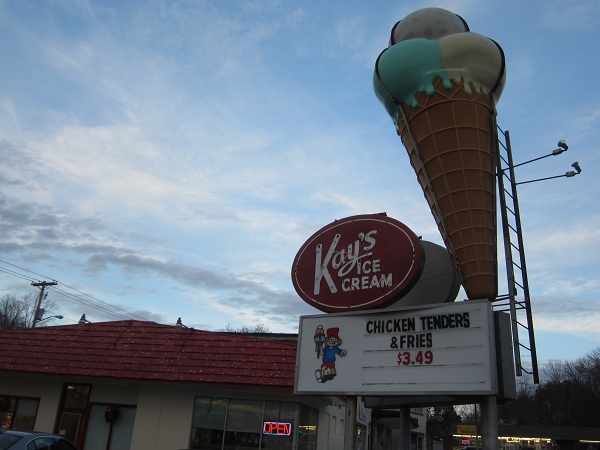 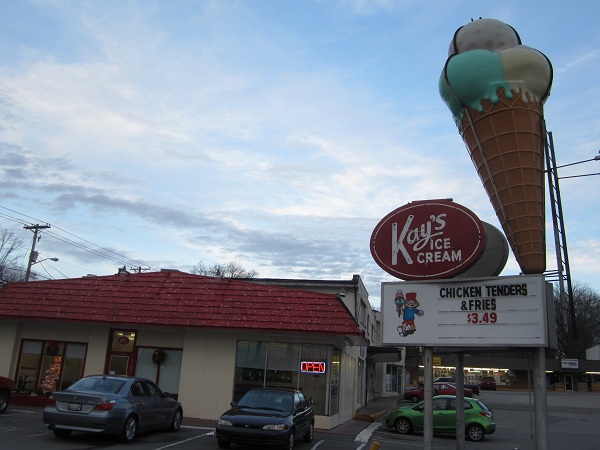 Sadly, though, one teeny dream was denied me. I had been hoping to bring my mother home a carton of Kay’s beloved old grape ice cream. Well, I call it beloved, but as far as I know, my mom’s the only one around who remembers or who would eat such stuff. We took some pictures of the sign, and noticed that it had a ladder affixed to it, and went inside to see what we could find. There was no grape ice cream, sadly.

The owner, Cathy Petty, who bought this store in 1987, had a thing or two to share about both the grape flavor and the odd ladder. Once upon a time, when Kay’s made their own ice cream, grape was always available. These days, the old Kay’s recipes are owned by Greenwood of Atlanta, which I found interesting, as, some months previously, the staff at the Chattanooga-area Kay’s Kastles told me that their old recipes are held by Mayfield. Mrs. Petty told me that she did request some grape ice cream after several of her guests asked for it. Greenwood mixed up a big batch of the beloved old grape, and it just sat there, their worst seller, so they no longer order it. What a shame!

But the ladder was an even bigger curiosity. According to what I have read, the Kay’s stores in eastern Tennessee had slightly different signs than the Kay’s Kastles stores in Chattanooga and northern Georgia and Alabama. Our stores had simply the giant ice cream cone; their stores had a little boy on the ladder sneaking a lick of one of the scoops. I wondered what had become of the little boy, and Mrs. Petty explained that many years ago, somebody offered to take the broken boy away for repairs and cleaning, and he completely vanished without trace. She said that she expects the boy to turn up on eBay one of these days. Remembering how Dalton’s Ice Castle retrieved its sign after it spent many years in a farmer’s field, I supposed that the boy’s hiding out in some barn somewhere, his tongue desperately searching for a big plastic scoop of fading ice cream, and only finding dirt and hay.

While many old Kay’s flavors are available in area Food City grocery stores under an umbrella called Legacy Brands – heck, I remember Chuck Wagon; how the dickens did Food City find the rights to that? – one that did survive into the modern day while grape didn’t is lemon custard. I had a scoop of that while Marie challenged the awesomeness of my vanilla malt from Cardin’s by getting one here. The lemon custard was completely terrific, sweet and not sour, and just a perfect little treat. And yes, the vanilla malt was completely fabulous; you’d expect nothing less from Greenwood ice cream, really. They do burgers, hot dogs, chili, BLTs, and all the expected lunch sandwiches here, and perhaps one day we’ll try one, but to be perfectly honest, I owe another Knoxville business a little money first. You see, an hour before, in between Pizza Palace and Cardin’s, we drove past something completely unexpected: another dang Kay’s ice cream sign. 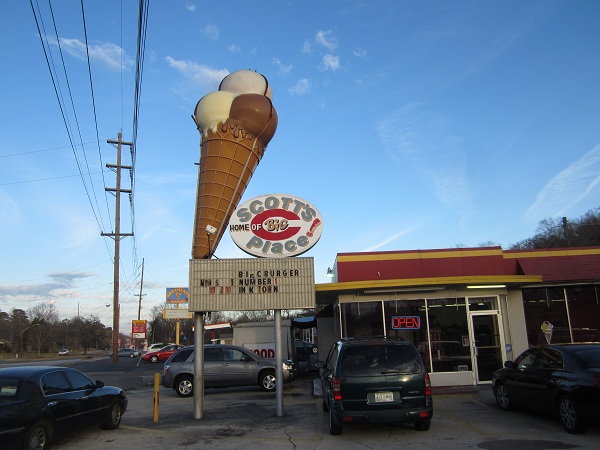 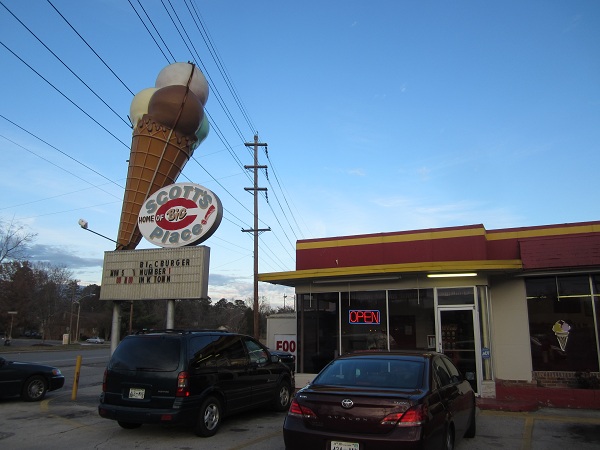 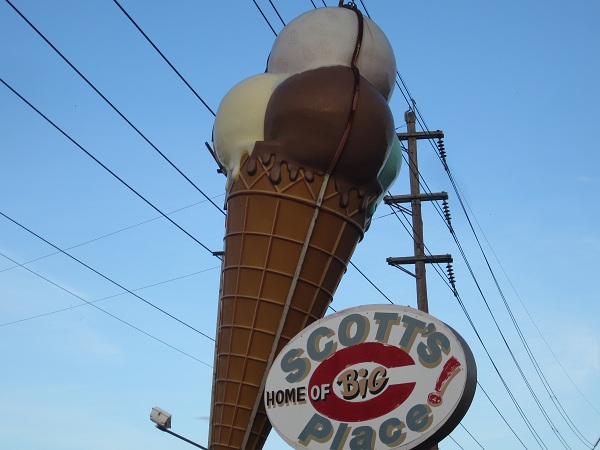 This had been a Kay’s in the 1970s and 1980s before it closed, and the building sat vacant for many years. I noticed that, once upon a time, this sign also had a ladder – and, presumably, a little boy with aspirations of licking the scoop – attached, but it’s long gone. I didn’t think to ask about it when I stepped in and met the owner, whose name, I believe, is Susan. She and her son explained that, when she was in high school, she worked at this Kay’s. It was only natural that, when the chance came to open a burger stand and ice cream parlor, they’d make a go of it at this location. It needed some work and paint, but heck, it already had an iconic sign.

Scott’s Place is as close as you can get to a Kay’s without actually being Kay’s. They may not have the rights to the name, but they get their ice cream from Greenwood, same as Kay’s these days. I didn’t think to ask about the grape flavor, and I didn’t know about the existence of the lemon custard until a half-hour later, but I’m pretty sure that if you’re on this side of Knoxville, you’re in for a good meal under that completely wonderful sign. Since they were good enough to indulge my curiosity without me actually spending any money, the least I can do is encourage you good readers to pay them a visit and tell us how it is.

As mentioned in the previous chapters, we would certainly love to know much more about the range that Kay’s, and Kay’s Kastles, expanded through in the 1960s and 1970s. Did you grow up in a town with either a Kay’s Kastles or a Kay’s? Can anybody confirm whether Huntsville had a store? A Google image search will bring up many more photos of that terrific sign, but do you have any of your own to share? Leave a comment and let us know!