Our readers in Atlanta are probably loosely aware that our small chain of Zesto stores is not entirely unique. Thanks to the wonderful work of Roadside Architecture, we know that there are Zesto restaurants, called, in some cases, “Zesto Drive-In,” all over the country, but they’re slowly but surely vanishing to time. The corporate chain, which launched in 1945, only lasted for a few years. A newspaper story on the wall of the store in West Columbia, SC claims that it disintegrated in 1951, but the Atlanta Zesto says that their one-time corporate owner, Taylor Freezer Corporation, didn’t halt operations for another four years. This left all of the original franchisees independent and able to grow, expand, or mutate at their own pace, no later than 1955.

I enjoy the mutations. In Crowley, a town about fifteen miles west of Lafayatte, LA, the Zesto became a Frosto. In Anderson, SC, the Zesto became a Besto sometime prior to 1962*. In Madera, CA, a Zesto sold out to another small, and mostly defunct chain, Sno-White. Roadside Architecture is aware of about twenty other stores that kept the name, the logo, and the signage, but are independent of each other.

The Atlanta Zesto restaurants – there are six today – trace their lineage back to the ones in Columbia. The first Atlanta store, long since closed, was opened by John Livaditis in 1949. His brother-in-law Angelo was co-owner of the Columbia area stores. I’m afraid that I didn’t quite nail down all the details, but it looks as though there used to be either six or seven Zestos in Columbia, along with one other fifty miles up the road in Newberry. Today, the Newberry store is still around, as are four of the Columbia locations. We stopped by two on our visit to town. 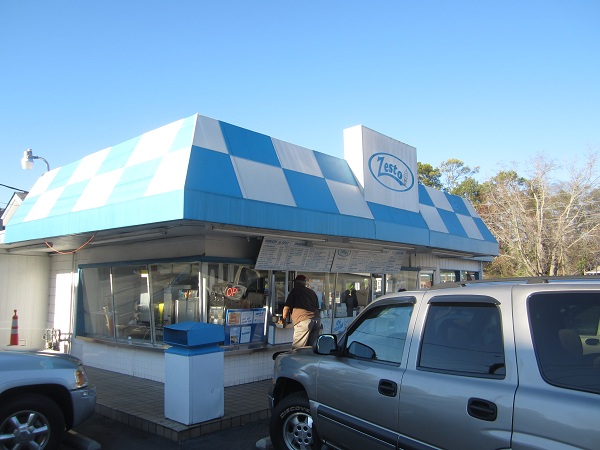 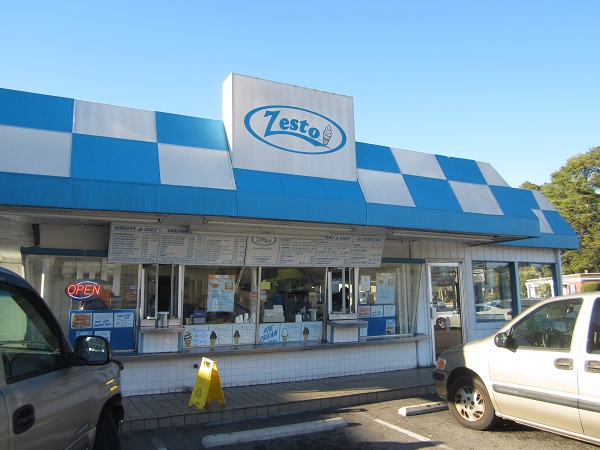 The original franchisees for the area in the 1940s were two partners, Angelo Tsiantis and Gus Manos. Two of the four remaining stores are still owned by their descendants. One of the odd ones out is this store on Forest Drive, which was sold twenty years ago to Tony Mayo. He also owns the Rosewood Dairy Bar, another timelost classic that originally opened in 1942. While this Zesto is no longer in the original family hands, it has a mighty reputation for some amazing fried chicken. In fact, I had thought that Marie might want to try the fried chicken here, but she was so pleased by the chicken that she enjoyed at Jackie Hite’s a few hours previously that she just had a chocolate and banana milkshake. I had a pimento cheese sandwich – madly, the young lady at the register told me that they simply didn’t put pimento cheese on burgers here, although the Rosewood Dairy Bar is renowned for them – and a Pepsi and we let the baby have some fries before we crossed the river to see another restaurant.

I understand that Pete Manos, the son of Gus, owns the store in West Columbia, on 12th Street. Angelo’s family owns the final store, which is referred to as “Angelo’s Zesto” and is on Main Street. The 12th Street store is famous for its big cone. 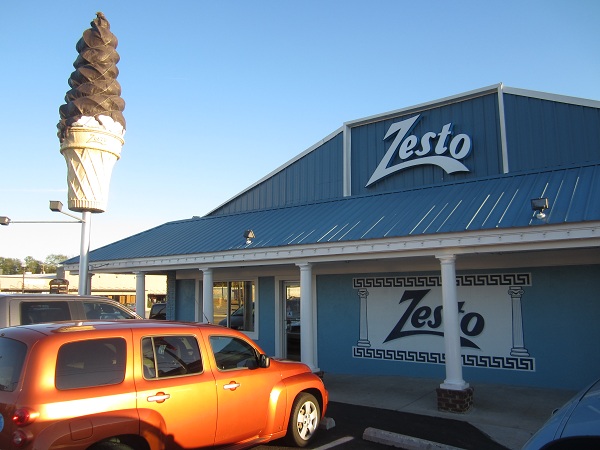 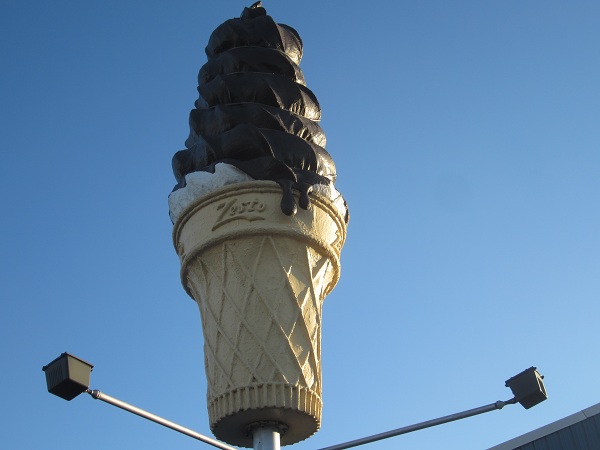 There are billboards all over the area inviting people to come visit Zesto under the big cone. Honestly, as somebody who adores the giant sign of Kay’s / Kay’s Kastles, this big cone is a bit of a drip by comparison, but it’s lovable all the same. Underneath it is a lobby that’s packed full of people getting carry-out and a small army of high school-age kids trying to get them served. Just like the constant chorus of “What’ll ya have?” at Atlanta’s Varsity, the walls here echo with kids asking “Who’s next, who’s next?” 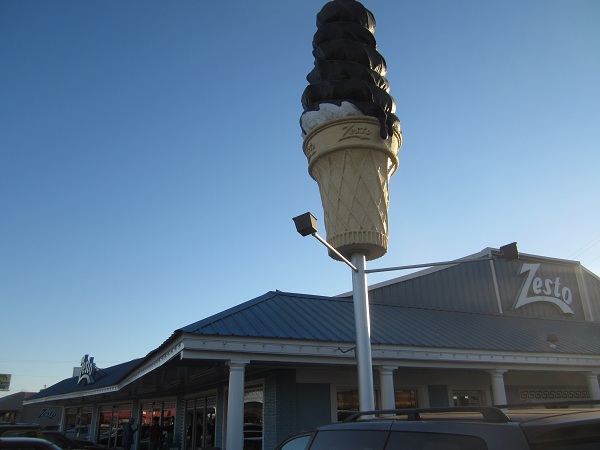 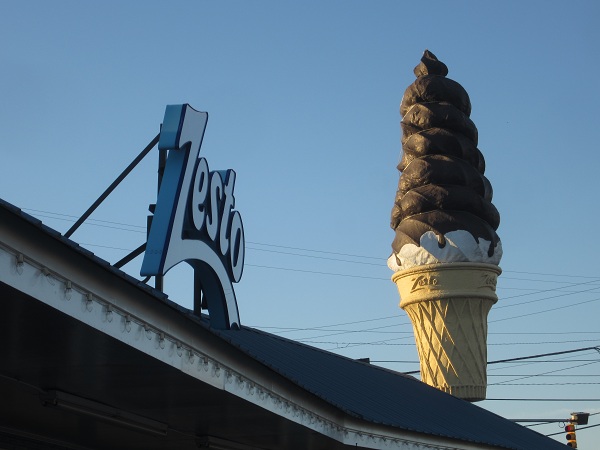 In between the two stops, Marie and I had an early supper at True, so we were just here for milkshakes. I had a cherry and Marie had a banana, and they were both perfectly fine for what they are. You come here for history and tradition, really, and not necessarily for really good burgers, although this place does have another solid reputation for fried chicken. We’ll have to give that a try sometime.

*Thanks to our good pal Devlin, who consulted a 1962 Anderson city directory to confirm that the restaurant had already become a Besto by that time.