When people talk about the best children’s museums in the country, there are three cities among the hundred eighty-odd that are on everybody’s top ten lists: Indianapolis, Boston, and Columbia. EdVenture is only ten years old, but it has an amazing reputation. It is huge and sprawling and has indoor and outdoor exhibits and I have been wanting to take the baby for several months. I had decided that we’d go in February, because we always end up in South Carolina in February, and was really looking forward to finally seeing this place. It did not disappoint.

Conceptually, it has many exhibits that are similar to the ones that we know and enjoy at The Children’s Museum of Atlanta, but it’s much larger and it uses more compact spaces extremely well. The staffers did a great job and the baby loved doing everything from visiting Eddie, a three-story statue of a little boy that guests can climb through, to picking “peaches,” to playing an air cannon snowball fight in the temporary exhibit, Snowville. This traveling exhibit, incidentally, has already closed in between our visit and this chapter, but “Adventures with Clifford the Big Red Dog” opens this Saturday. We had this last year at The Children’s Museum of Atlanta, and if you’ve got kids between 3 and 6, you need to take those babies to Columbia. We were there for almost three hours and he was still not worn out at the end of it, nor had we seen and done everything.

While you’re in Columbia, of course, you’ll need something to eat, and did we ever find something special on this trip. We have been very fortunate that each of our very brief visits to the city have found us at good restaurants, but True BBQ, which I read about thanks to Eat it Atlanta, a blogger who visits South Carolina much more frequently than us, might be the best of all. It’s just a mile or two from EdVenture, on the other side of the Congaree River on 12th Street.

Ernest and Milton Zanders opened in 2010 (in an old Maryland Fried Chicken building) and have been telling the world about their awesome Pretty Lady and Sexy Lady sauces. Certainly, most people are talking about them – except for poor Marie, who got so tongue-tied and embarrassed trying to order the Sexy Lady sauce that she just pointed at the menu and asked for the red tomato-based sauce. 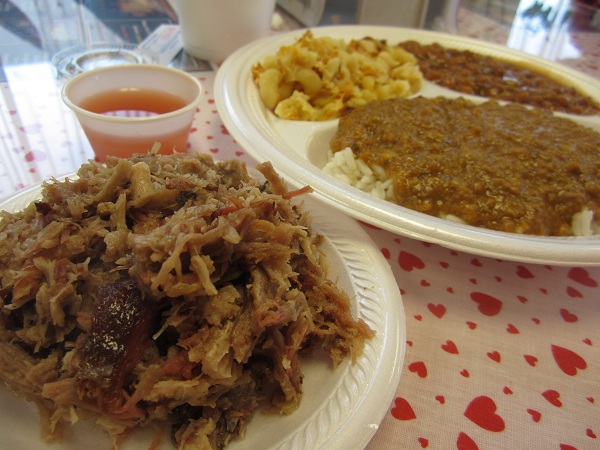 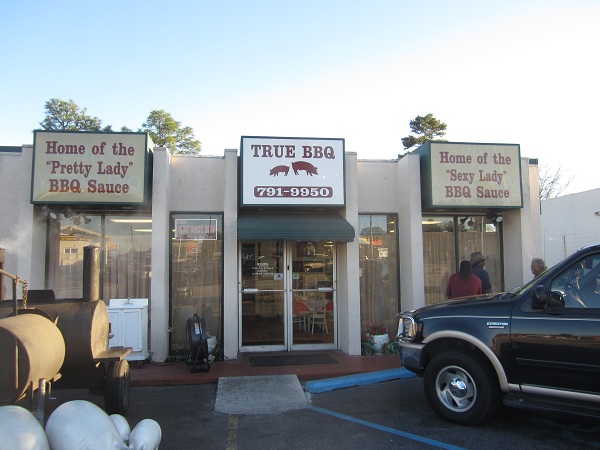 Man alive, was this ever a good stop. The plates are very nicely priced. $7.75 gets you a decent amount of chopped pork, a heaping pile of hash and rice, and two sides. I ordered mac and cheese and baked beans, which were both pretty good, but mainly just fed those to the baby. The other things were so fantastic that I didn’t wish to waste calories on the things that I ordered for the toddler.

The chopped pork is certainly worth trying. It’s smoked overnight on a mix of wood – Ernest told us that he smokes over whatever he can get, but prefers pecan when it’s available – and then chopped quite fine. It is smoky and lip-smacking good. Since Marie was trying the more Alabama/Georgia-styled tomato-based Sexy Lady sauce, I suppose that I should have tried the mustard-based Pretty Lady, but I’d already had a delicious mustard-based sauce at Jackie Hite’s for lunch and so went with an unnamed and thin Lexington-style pink vinegar sauce. Maybe they should call it Sassy Lady or something.

But as much as we enjoyed the barbecue, the real showstopper was the hash and rice. I enjoy this stuff a lot, and have found as many recipes, varieties, and deviations of it in the Palmetto State and eastern Georgia as there are different takes on barbecue throughout the entire southeast. At Jackie Hite’s, for example, the hash was very much like a meat gravy. But this was something remarkable. Meaty, peppery, and only just a little buttery, this was simply the best hash that we have ever had. One of the sexy and pretty ladies who work there – look, I’m just covering all the bases – stopped by and asked whether we needed anything. I said “Yes, three pounds of this hash, delivered to our place in Atlanta, every week.”

Meanwhile, the sexy and pretty lady sitting at the table with me briefly pouted that, for the first time in a long time, she had Menu Envy, because she just asked for a sandwich and did not have a big plate of hash. I enjoyed one last bite and let her finish mine. After all, she missed out on the almost-as-awesome hash at McCabe’s in Manning when I circumnavigated South Carolina last year. Plus, all the sides were now in front of her and she could take over feeding the baby.

The barbecue is good. It’s fifty-mile barbecue. The hash is unbelievable. It’s two hundred-mile hash. I’d eat there again today if I could.