Back in the fall, when I circumnavigated South Carolina, the road took me through the small twin towns of Batesburg and Leesville, which are home to a pair of celebrated and famous barbecue shacks. (In case you didn’t read that awesome adventure, start here.) I knew before I started that I would only visit one of the two, so I flipped a coin and settled on Shealy’s, which turned out to be the better known and larger restaurant. I enjoyed Shealy’s a good deal, and as I read about their friendly rival, Jackie Hite’s, I knew that I’d have to make a return visit.

There was another factor that brought me back: I didn’t indulge in the South Carolina buffet tradition. In part because of budget and in part because there are only so many meals that a man can eat in a day, each time that I stopped at a barbecue buffet, I just had a sandwich and maybe one side, enough to appreciate the flavor and the taste, share a few words with the staff and then hit the road. I’ve only “circumnavigated” twice, and good heaven, I love doing it, but it doesn’t leave a writer much time to linger. Maybe down the line, I’ll try it again over three days.

So the stars lined up for us to visit Jackie Hite’s. In February 2011 and 2012, Marie and I took day trips to South Carolina. I decided to keep up this tradition, but instead of looping around one way via I-85 and the other via I-20, I wanted to just go and visit Columbia, a city we’ve only just blown through on these loops. I also very much wanted to take the baby to play at EdVenture, one of the most highly regarded of all children’s museums. Batesburg-Leesville is just a short detour north of I-20, and we timed it just perfectly to arrive right as they opened. Given that my limited experience with South Carolina buffets is that the longer the food stays out in the steam trays, the mushier it tastes, I wanted to sample this food as early in the day as possible.

We were extremely pleased with this meal. Admittedly, I didn’t have any more than a sandwich at Shealy’s and so a true comparison between the restaurants would be unfair. That said, Shealy’s indeed serves an excellent sandwich, but I liked Jackie Hite’s even better. It helps that I really like mustard sauce. 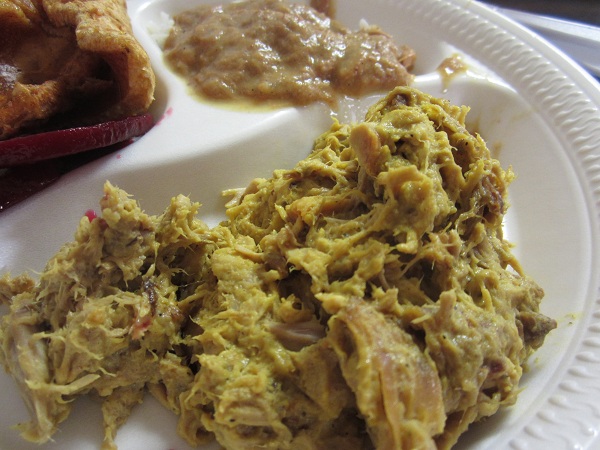 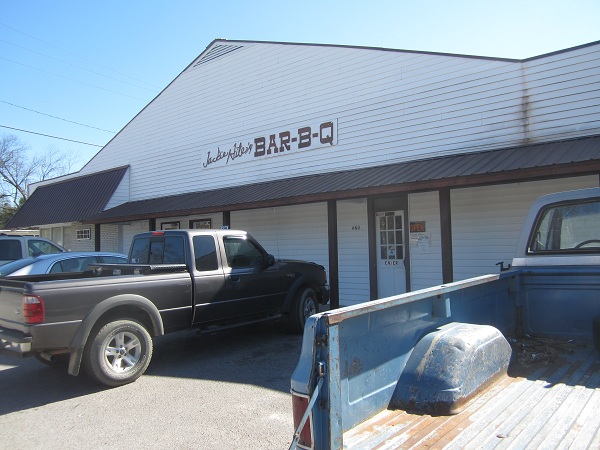 This is interesting, because I normally don’t care to have pork cooked in sauce. Off the top of my head, I can recall a few places in Georgia that prepare it this way – Troy’s in Rome, 4-Way in Lumpkin, the chopped pork at Keith-A-Que in Ashburn – but they all use a tomato-based sauce. It’s only in South Carolina that I’ve experienced meat cooked in a yellow mustard sauce. Shealy’s does it this way, of course, as does the legendary Sweatman’s in Holly Hill, a restaurant that I have been saving for a certain special occasion down the line. Serious Eats, linked below, identifies these three restaurants as the most well-known in what they call “the mustard belt.” This is perhaps a hundred mile-long arc that stretches through the eastern half of the state, from south of Greenville down to about Orangeburg. The difference between cooking in a tomato-based sauce and cooking in a mustard-based sauce is like the difference between hell and heaven. If you must cook in the sauce, do it in mustard. That’s the way to eat it.

Jackie Hite’s is a much smaller restaurant than Shealy’s, but its employees are no less friendly and sweet. I got to exchange just a few words with one of Jackie’s daughters, who told me that this particular storefront opened in 1986, although Jackie’s been cooking since the late 1960s, while also serving on various community or civic boards, or as Leesville’s mayor. Along with the pulled pork, there was fried chicken – completely stunning and wonderful fried chicken – and tough but very satisfying pork skins, and lots of vegetables. The hash, meanwhile, was so soupy that I had to ask somebody to point it out; I thought that it was brown gravy at first! It was very tasty and buttery. Marie and I enjoyed the beets, tomatoes, and creamed corn, and the baby might have thought that these were the best mashed potatoes that he’s ever had. What really blew his mind was the pudding. His first bite of banana pudding and his eyes glowed like stars for a half-second.

Marie, who does not enjoy mustard-based sauces as much as I do, nevertheless agreed that this was excellent barbecue, although she preferred the fried chicken. In fact, the chicken was so good that we passed on ordering some a few hours later, as we’ll share in a few chapters. I thought that the barbecue was completely terrific and the better of the two, and was so glad that we chose to stop here. It was less expensive than I was anticipating, and they even include a drink in the price of the meal, so we got out of here incredibly satisfied and well under budget. That’s just as well; a big and unplanned expense was on the horizon…

Other blog posts about Jackie Hite’s: