We need to talk.

My tent, in short, is a big one. The reason that barbecue is my favorite food by miles is a simple one: you can prepare it just about however you want to, and I will eat it. Going into things and sitting down at the table, I’ve only got one request, and it’s not too much to ask. Your meat? I want to be able to taste it without any sauce. I might very well drown it once I’ve done that, but I don’t want the meat to be cooked in sauce. Now, even there, some people can get away with it. Jackie Hite’s in South Carolina, for example. I understand that the legendary Sweatman’s also cooks in a mustard sauce. 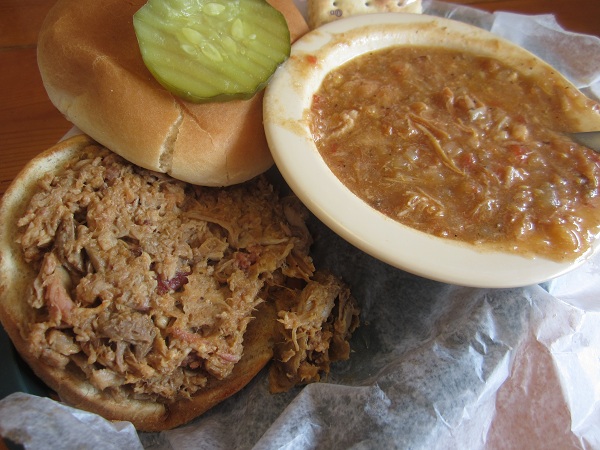 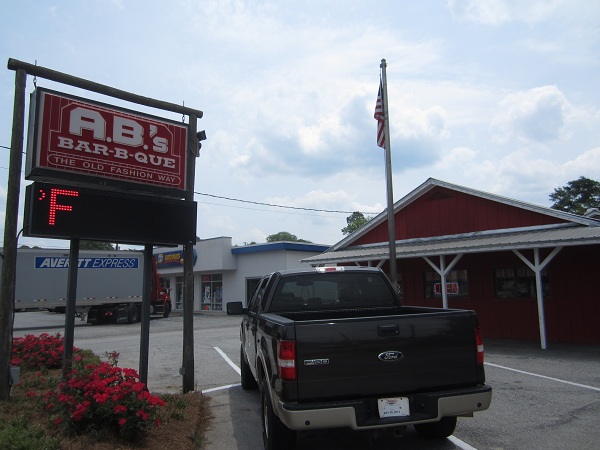 The strange thing here is that in previous trips to the counties around Macon, we had pretty much exhausted the A-team of barbecue. We have already visited the legendary old places like Fresh Air, Old Clinton, and Fincher’s, which are all very well-known. So this time out, we were working through lesser-documented establishments, like A.B.’s in Hawkinsville. This is a place that opened in 1990 and, unless you like fast food chains, it doesn’t look like there’s a whole lot else to eat in Hawkinsville other than a southern-style buffet place called Tom & Sandy’s Horseshoe.

I ordered a sandwich and stew and asked for my meat dry and was given the bad news about it being cooked in sauce. A nice lady brought it to our table and my heart sank. This meat had been in a steam tray for hours and it just looked goopy and wet. Now, fair is fair, it was indeed a lot tastier than I was expecting, and I considered it acceptable if not satisfying. It should not have been presauced, but fortunately the mild mustard was really good and brought out enough flavor that it survived the long wait in the steam tray. They’ve hit on a recipe that defied my expectations and is very popular with the locals. The stew was also interesting, and had more of a taste of onions than tomatoes. I was reminded of the stew much further north, at Lively’s Owens in Cedartown.

There are two bottles of sauce on the table. One is the mild mustard sauce in which the meat is cooked, so you may add more of the same. The other is a fire engine red, thin, hot vinegar sauce. That sauce is very good, and I would have loved to have this meat, dry, with a little of that. I don’t think that the flavors went at all well together, though. It was a missed opportunity.

Then again, a little later up the road in Bonaire, I found a meal that had me longing for words like “acceptable” and “interesting.” 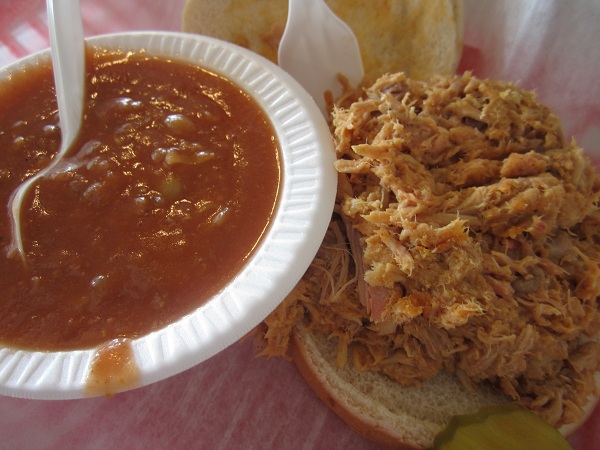 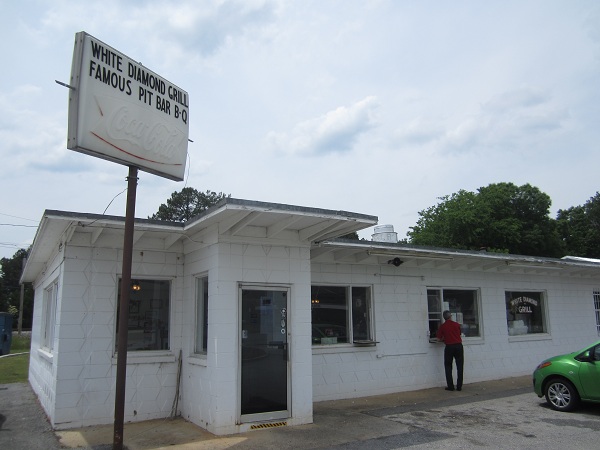 The White Diamond Grill holds a remarkable and unfortunate distinction for me. This is the first and hopefully only time that I have visited a restaurant that has been featured at the awesome Chopped Onion and had a subpar meal. Actually, subpar is slightly too kind. This restaurant opened during the Truman administration and should have closed before Eisenhower was sworn in.

Unlike the previous stop, whatever promise this smoked meat once had was confounded by the mustard sauce, which I didn’t enjoy at all. They didn’t go well together and the result just tasted like third rate cafeteria slop. I’ve had worse barbecue, mind. Maybe twice.

Something set off one of Marie’s alarms when we entered. She ordered a hamburger. She has never done this. She has never, ever done this. I raised an eyebrow. I lowered it after I tasted the presauced barbecue. As diner burgers go, it wasn’t too bad. It was certainly better than the barbecue. Still, she didn’t finish it. It doesn’t matter how old a business is when the food is so mediocre.

We were three for three in finding presauced barbecue on this trip, starting with the quite satisfying Grillmaster in Perry. The next stop would prove to be even more satisfying, but it’s a crap shoot and it isn’t worth the risk. In fact, my blogging buddy Sweet Tea & Bourbon was in the area recently as well. He stopped by one of the four locations of Georgia Bob’s Barbecue Company, which is also cooking in sauce, and found the same mushy and ultimately unsatisfying pork. This just has to stop.

Middle Georgia, let your pork breathe. Remember what Louis the Lifeguard told you on Saturday mornings, and don’t drown your food.

12 thoughts on “Getting Sauced in Middle Georgia”