In this entry, a few very short recaps of some places that we photographed. Longtime readers might recall that I have a soft spot for old-fashioned walk-up dairy bars. Very few of these have survived into the modern day, particularly in Georgia. One of the few that we’ve found in Georgia, and the nearest to us, is the Jiffy Freeze in Canton. Earlier this month, Al.com had a short feature about five others in northern Alabama and one near Chattanooga, half of which we have featured here and one of which I hope to see next month.

One that did not make Al.com’s list is the former Stevenson Dairy Bar, because they have not replaced their broken soft serve machine and are (still) in the process of reformatting themselves as a full-service family restaurant called Bubba’s. We stopped by Stevenson’s/Bubba’s about a year ago, and were disappointed that we couldn’t get any ice cream.

Would you believe that the same darn thing happened in Unadilla?

The Cree-Mee Dairy Bar opened on the outskirts of town more than fifty years ago, but nothing exists of the original building but parts of the floor and the roadside sign. The old walk up building was destroyed by fire years ago and they restructured themselves accordingly into a fast food restaurant with an enclosed dining room. And now, they have no ice cream either. Their soft serve machine has also broken, and while they’re said to make a good chili dog, we had more barbecue on the agenda and so we passed on a meal. I spoke briefly with the owners, Lindy and Lisa Barron, and passed along regards from a reader who asked me to say hello, before stepping outside to shoot a few pictures and moving on. 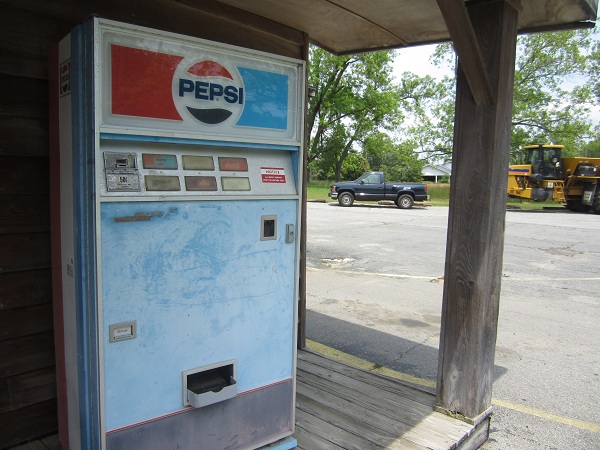 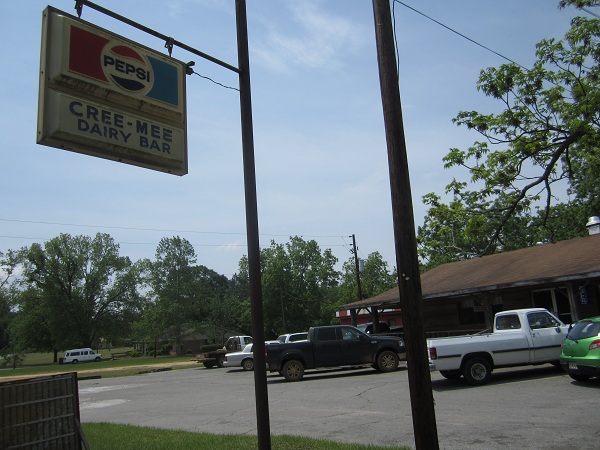 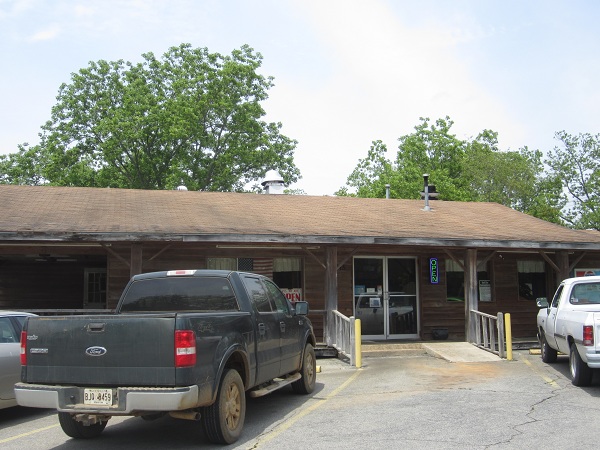 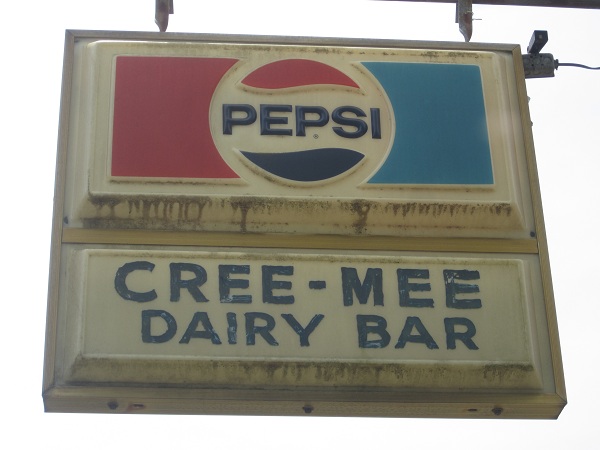 Our next two stops, to be detailed in the next chapter, saw us sampling more barbecue. Then we made it into Macon and drove past this incredibly neat looking building on Broadway while heading north to the city’s children’s museum to meet Marie’s mother. It is Tucker’s BBQ, and it’s a proper curb service drive-in. Finding a drive-in that specializes in proper, pit-smoked barbecue is not very easy. Two others that we have featured are Piggie Park in Thomaston GA, and Bar-B-Q King in Charlotte NC.

I had a plan to stick around in Macon and make a dinner stop while Marie, her mother, and the baby drove on home. I was willing to change my supper plans to try Tucker’s, but unfortunately they close at the very early hour of 3.30 on Fridays. I had to settle for coming back by after they closed and snapping some pictures of the building. 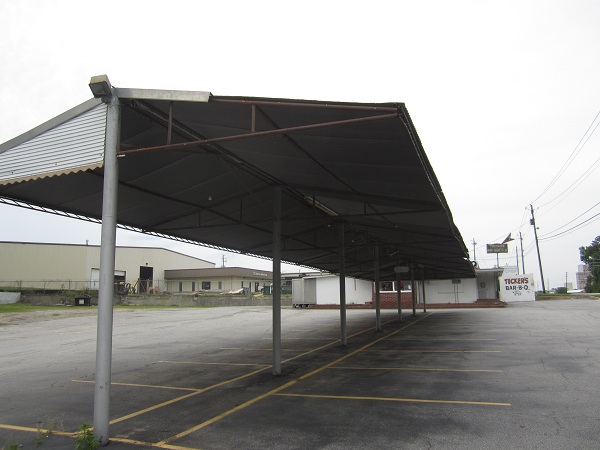 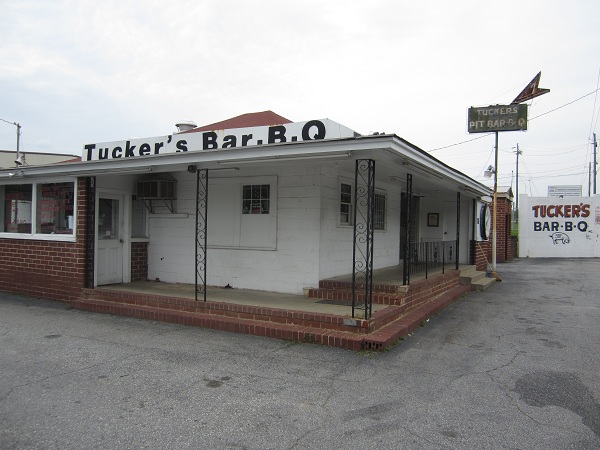 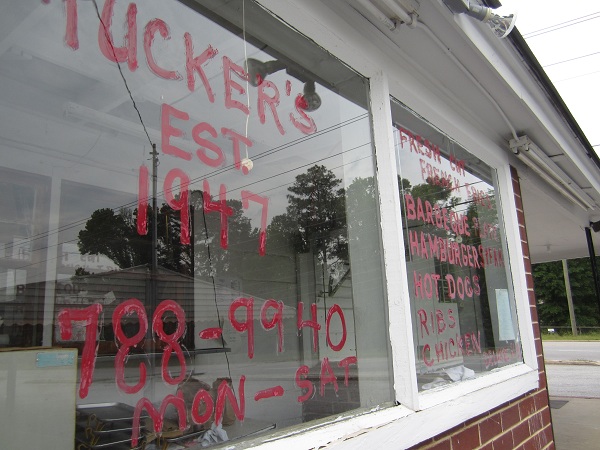 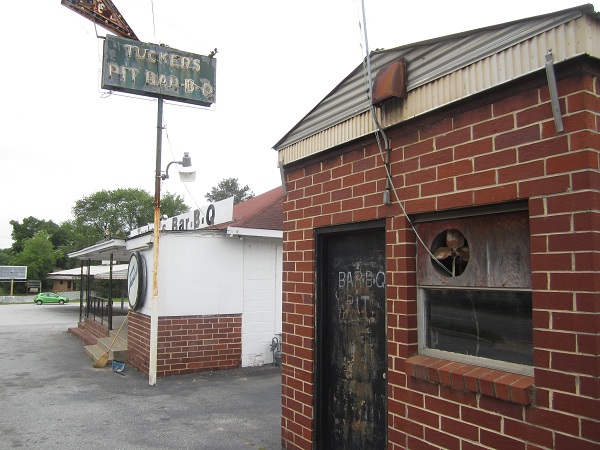 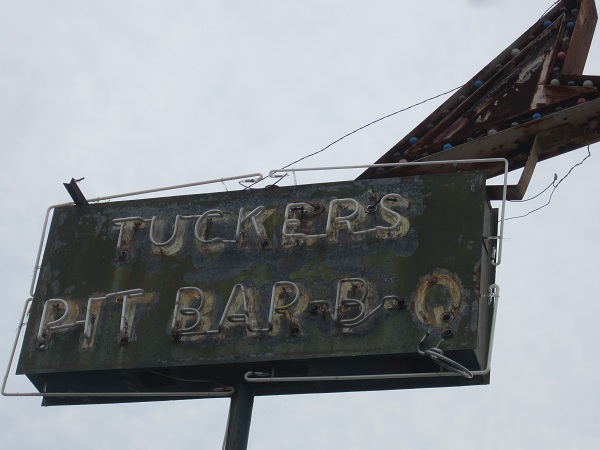 The really amazing thing was coming home and finding nothing at all online about Tucker’s. Admittedly, my research typically only goes so far as doing a Google search and scrolling through results until I get bored, but this place has been around for more than 65 years and I can’t see that anybody has written about it beyond quickie diner reviews at Yelp or Urbanspoon. No local papers, travel sections, barbecue bloggers, roadfooders, chopped onionners, southern belliers, Food Networker obsessives, nobody.

I’ll see what I can do about fixing that one of these days.