Let me take a few sentences to recap the background and reasoning behind this trip to middle Georgia. Marie’s mother and her father live on Saint Simons Island, and we often go and visit them. For many years, we had been taking various long ways, to see different places and things more interesting than I-16. Since we had the baby, however, I started to rethink our policy and decided that, in future, we should hammer down and stick to the interstate and get down there as quickly as possible, so the grandparents get more good baby-time, and so the baby doesn’t have such an incredibly long and meandering car trip.

In February, I identified six last places around Bibb and Houston County that I definitely wanted to visit: two in Macon and four somewhat south of the city. Earlier this month, we visited those four more out-of-the-way destinations. Marie’s mom wanted to come visit us for Mother’s Day, but she has often arrived in Marietta rather exhausted and spent by the trip. A five-and-a-half hour drive is pretty rough on her by itself; a five-and-a-half hour trip with the stressful traffic of Atlanta on the far end really does her in. So I had a terrific idea: Marie and the baby and I would drive down to middle Georgia, indulge in a whirlwind eating tour, and meet her mother at the Georgia Children’s Museum in Macon. Then Marie would drive her mother back to our house, so that she could relax and not worry about the Atlanta traffic. It worked splendidly. Everybody had a good trip, and even though I knocked four restaurants from my to-do list, I managed to add a new one for another time. Maybe we’ll have to do this again in a few months.

First on the list was Grillmaster in Perry, down at exit 136. This came recommended by at least three of our readers over the years and it is in a very interstate-friendly location right off the highway. The restaurant opened in March of 2007, finding a home in what had once been a Tastee-Freez. The building sat vacant for a full fifteen years before Grillmaster opened. The last six years in the middle Georgia sun have already taken a toll on the design and painting of the place. There are photos of the sign out front that show it vibrant, with the lettering standing out from the black background. Today, the sun has bleached the sign nearer to white. 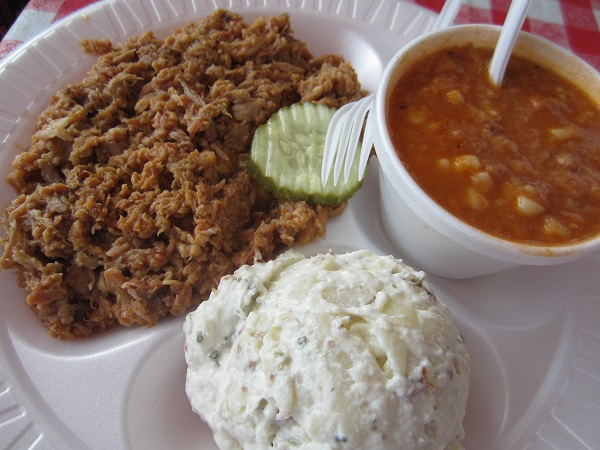 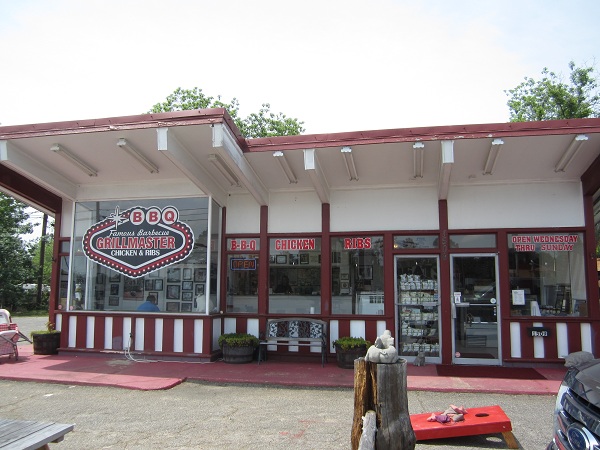 We arrived a few minutes before they opened, and our friends Rex and Rachel were not far behind in joining us. They took long lunches to enjoy the trip down here from closer in to Macon and have some good barbecue. I had resolved that I’d stick with chopped pork and stew at each of the places that we visited on this trip. The photo above is of Rex’s plate. No, I didn’t succumb to the temptation of that potato salad, which is made with bacon. The bites that I had at the previous evening’s supper, noted in the last chapter, were indulgence enough.

Gary, the owner, also brought us out a few samples of their ribs. These were very good indeed. These are smoked over charcoal for eight hours at the end of the evening, and then tightly packed in a cooler overnight so the fat gets good and sweaty. Speaking of the smoker, we stopped by outside on our way out and were surprised to see that it has, happily, survived a much larger-than-planned fire. You can see the charred damage all around the building and the fence behind it.

Anyway, the chopped pork was pretty good and the ribs were better. The stew was perfectly acceptable without being a standout. The pork, incidentally, is served lightly pre-sauced with a mild mustard-based sauce. There will be more detail about this in the chapter after next. Marie and the baby, along with their chopped pork, shared some green beans, cooked with chicken fat, and BBQ beans. Both were good, but they each preferred the green beans.

We all agreed that this was solid barbecue and certainly more than acceptable, albeit not as excellent as a couple of the older joints in the region. But anybody traveling between Macon and Valdosta on I-75 should definitely know about it, because it’s worth a stop and I’m very glad that we finally did. It’s always nice to visit with Rex and Rachel as well. The last time that they saw the baby, he was still hanging out in his carrier seat, and now we are having to arrange chairs between the table and the windows to keep him hemmed in, since the restaurant doesn’t have any highchairs for toddlers. Well, you can’t blame him. Two hours in the car playing “Little Blue Ghost” will leave any toddler desperate to run around and get his wiggles out.

Other blog posts about Grillmaster: