While dairy bars are not unknown in Georgia – we’ve visted, for example, Dari Spot near Gainesville and Jiffy Freeze in Canton – the actual name “dairy bar” is very uncommon. The only place in the state that I’ve found that uses that name is a joint called Cree-Mee down near Unadilla. In Alabama, the term is more widely used. Just so we’re on the same page, I’m talking about little places that specialize in no-frills fast food and soft serve ice cream, effectively the same sort of food that you could typically expect to find at a Dairy Queen, but independent, local and, usually, very old.

In fact, there are at least three businesses within ten miles of Scottsboro that call themselves dairy bars, along with Bowen’s, up the mountain in Henegar, which we visited on our previous stop in the area. There may be others today; there certainly were many, many more in the past, but the spread of interstate fast food chains took many of these restaurants down like dominoes. The survivors still thrive with some strong community loyalty. Five Points Dairy Bar, located on the east side of Scottsboro where AL-279 meets AL-35, remains incredibly popular with the locals. The place is in desperate need of a new paint job, but it still completely packs ’em in on Friday and Saturday nights, with lines down the street. That’s the way it’s been since the 1940s. 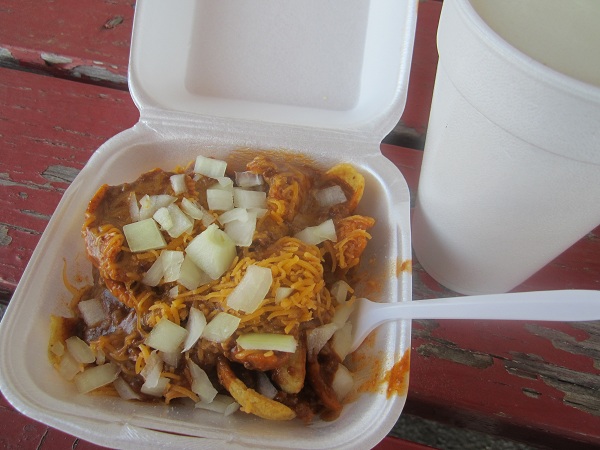 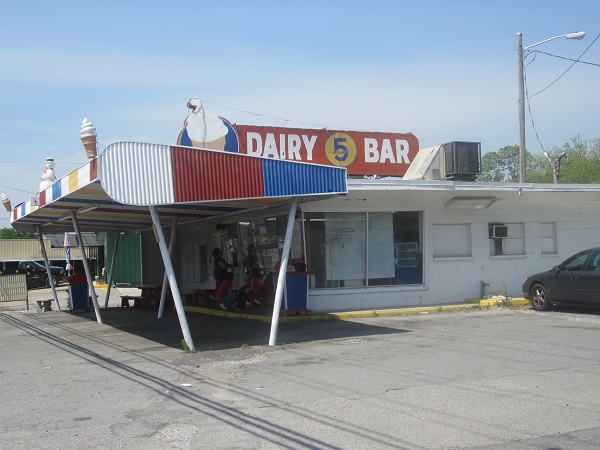 As I mentioned in the previous chapter, Scottsboro really looks like a town that’s on life support, clinging on in the hopes of some new factory jobs or something. The city is home to one tremendously fantastic barbecue joint (Big Marv’s) and one very good one (Tate’s), and this place, and, of course, the Unclaimed Baggage Center, which brings in all the tourists. When you see all the closed plants and gigantic garage sales, it just feels like a lip-bitingly sad town. And here we have this gorgeous old building with its charming signage and plastic polar bears, and for a moment, my spirits were lifted by its timeless feel, but brought crashing back to Earth after seeing the tatty trailer behind the building, and all the dull, peeling paint. This is a place that could look completely fabulous, but I just don’t think that the money’s there for the restoration that this wonderful place deserves.

As for the meal, no, I’m not suggesting that anybody make a pilgrimage here for it, as it’s just basic, frozen fast food. I don’t know that anything is fresh or hand-cut. But should you be tempted to explore the treasures of the Unclaimed Baggage Center, then this is certainly worth a stop for a milkshake and a bite to eat, and places like this deserve your business more than the national chains, of course. Plus, the people are very friendly and nice. The woman at the register told me how busy and mad it gets on weekend nights, and I believe her. She said that this is simply the place where everyone goes, and where everybody works for a while as a teenager. Punctuating that, a mom of three who was there with me added that yes, her first job was at the dairy bar as well.

I had some of a Frito pie, which was not bad, and a vanilla malt, made with Blue Bell ice cream. Guests here have their choice of soft serve or “old fashioned” Blue Bell. I kicked myself after I left, because while the malt was incredibly tasty, I should’ve asked them to make a Cookies and Cream one. Wouldn’t that have been good?

After I finished and snapped a few pictures, wishing that I could travel back in time to see this place jumping when Scottsboro was more alive, I went back down the road to pick up my family from the Unclaimed Baggage Center, where treasures had been procured, and we went to get them some lunch. I had my choice of either the Section Dairy Bar, which is across the river, or the Stevenson Dairy Bar, which was back the way we were going. With one major, out-of-the-way detour awaiting us north of Chattanooga, I went with the second choice to save time. I have been kicking myself ever since, because not only did I deprive myself of another trip across that beautiful steel bridge over the Tennessee, but the blog We Love Burgers offered a very short report about Section Dairy Bar and it just looks so charming and fun!

No, the ladies were looking forward to fast food and milkshakes, and what we found when we entered Stevenson Dairy Bar, which also goes by the name Bubba’s, was a dry erase board that reads “We will no longer have ice cream.” I resisted the temptation to attempt a John Cleese imitation, take a deep breath, and say “It’s not really much of a dairy bar, then, is it?” 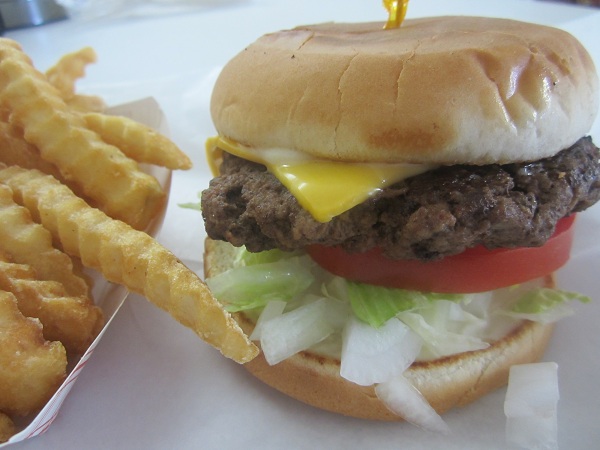 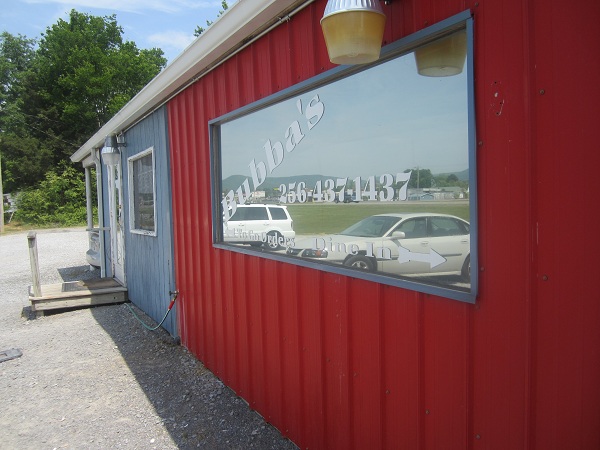 Unfortunately, Bubba’s soft serve machine broke down some months previously, and, lacking the $29,000 needed for a new one, they have chosen to instead focus on the quality of their food, which was much, much higher than expected, and offer guests who wanted ice cream little bowls of “Itti-Bitz.” If you’ve never seen these before, they’re second-rate imitation knock-offs of Dippin’ Dots. My daughter sighed and had a bowl of those along with a salad. Marie passed, and, instead, had a surprisingly good hamburger.

I really mean it when I say this was a surprise. We were totally expecting a simple, basic fast food burger and what we got, after a short wait, was a hand-crafted patty of very high quality and a really wonderful and tasty tomato atop it. Marie said that it was just excellent, and we were certainly impressed that Bubba’s defied our expectations so pleasantly.

The service was likewise top-notch and attentive, although our server was not entirely clear on the restaurant’s history. She knew that Bubba opened this place in the early 1990s, but was not certain whether he named this new business the Stevenson Dairy Bar or whether he bought a place with that name. I suspect it’s the latter, hence the long, slow transition to calling it Bubba’s. That’s how it is signed on the building, but an A-1 Portable Sign out front (did you know that’s what those are called?) still calls it Stevenson Dairy Bar. My take is that Bubba should consign that name to history and focus on telling the world about his very good, juicy burgers. With its indoor seating and nicer fixtures, it is certainly a cleaner business than any other dairy bar that we’ve visited. On the other hand, one might reply that it is certainly uncontaminated by ice cream.

Help us out, readers! I may not be as enthralled with dairy bars quite as much as I am with barbecue joints, but I certainly love them and would love to see more of them. These old-timey places don’t really draw attention to themselves via social media, and so they’re kind of hard to find. Do you know of any others in the southeast that we should visit? Have a look at the dairy bars category to see where we’ve been, and leave a comment below letting us know about the ones that we have missed!