Boy, I just had no luck whatsoever with 3 Lil’ Pigs. I read about the place over at Buster Evans’ terrific barbecue blog earlier this year and was excited to go to Gainesville and try their chicken mull. So Marie and I went up in June and learned that they were closed on Saturdays. After the trip that we took to Chattanooga, Matt stayed overnight with us, just to have a guys’ break and play some Catan, and I took him home the next day, allowing us the chance to finally give them a try. They don’t serve mull any longer. The young fellow at the window was apologetic, but explained that they were throwing out too much of it to continue offering it. Can’t win for losing, can we?

It’s a very interesting business. The owner has leased a huge space called The Palace, decked out inside with an “old western town” theme, and rents it out for concerts and events. The owner told me that they do really good business in hosting Quinceañera festivals. Five days a week, they wall off the right 20% or so of the building and serve some amazingly good barbecue from a little window. These divider walls are pretty neat; they are covered with autographed 8×10 glossies by an army of country music stars active in the 1980s, from Mel Tillis to Johnny Paycheck. Well, I certainly missed the chicken mull, but the rest of our lunch was super. 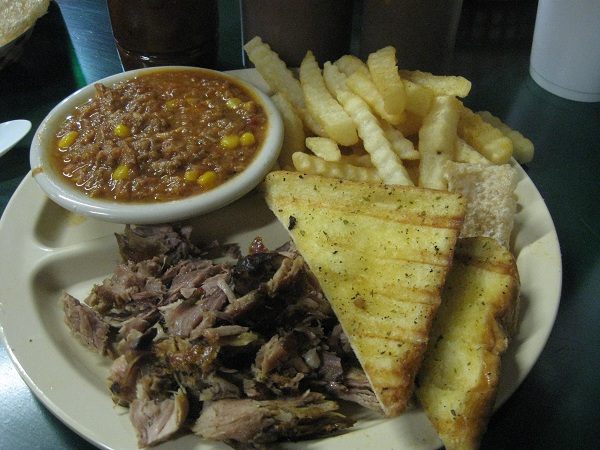 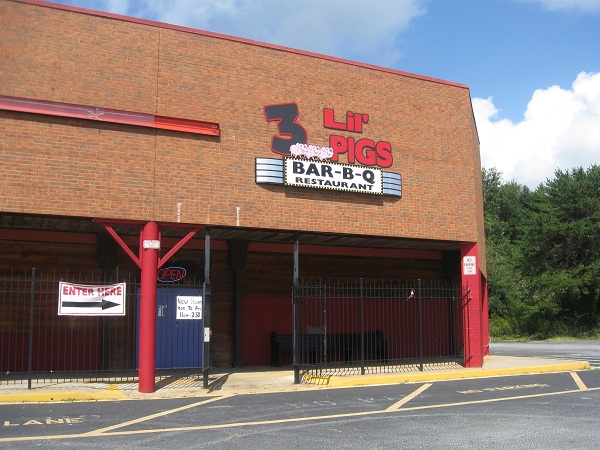 Well, I’m being a little too generous on one front. I asked the fellow at the window – the same guy who gave me the bad news about the mull – whether they make their own fries here. He said “we sure do.” Returning from the gents’, I saw somebody in the back retrieving a big brown bag from a freezer, and watched them pour frozen fries into the fryer. Son, that is not what I meant by making your own fries.

Ehh, just as well I like fries regardless. They were just fine, but I would have rather tried 3 Lil’ Pigs’ slaw or baked beans than have the same fries that go from the truck to lots of restaurants. Especially once I had a sip of this excellent stew, I figured this place had to do everything else well. The chopped pork was really great, too. They have three sauces. I liked both the sweet and the house vinegar-based sauce a good deal, but I was not taken with the hot vinegar sauce. It tasted too much to me like some bottled Tabasco or something had been mixed in. But, proving that there’s a taste for everything, I overheard a guest at a nearby table compliment the owner, and tell him that this was the best hot sauce she’d ever had. Your mileage will vary, but I’d try the excellent mild vinegar sauce first.

The owner, who brought over a little basket of piping hot pork skins for us to share – great touch! – told us a little about their problems getting the business up and running. He didn’t mention the major problem, that being the presence across the road of the established and popular Johnny’s. I believe that 3 Lil’ Pigs is a little better than the competition, although both are indeed fine restaurants. No, the main problem has been the air conditioning.

3 Lil’ Pigs opened towards the end of February and they were almost immediately stymied by vandals climbing on the building’s roof and destroying the air conditioning to get at the copper pipes. They’ve had an uphill climb ever since, and elected to close early each day while they invested in new circulation, since it was so stifling indoors. Between this and unsold mull, this place really has had an unfortunate summer. Hopefully, the end of the year will be better for them, and see a little more blogger activity and buzz building around them.

We had one more stop to make in Hall County – at least, I think it was still in Hall County – before I came back home. I really enjoy a site called Roadside Rustic, full of beautiful photographs of old barns and old businesses, and in August, a trip through this region found a little place called Dari Spot. 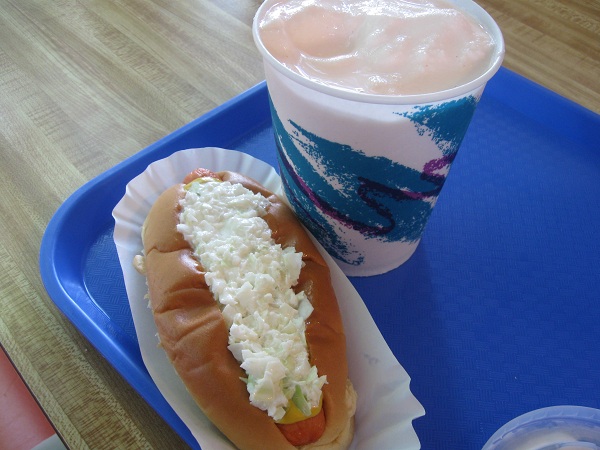 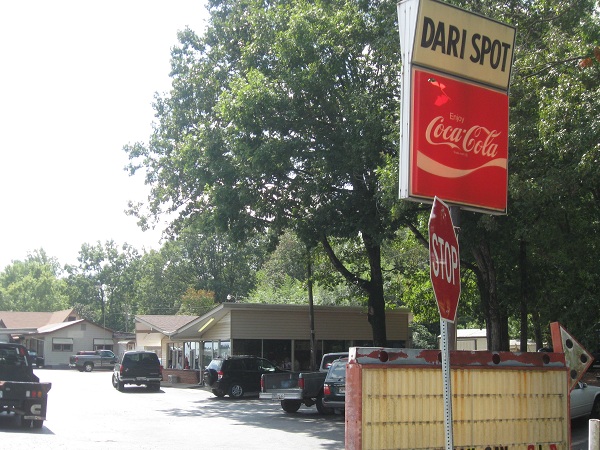 I have such a love for little restaurants like this. It is a dairy bar like Mrs. Story’s in Opelika and Jiffy Freeze in Canton. It’s an old-style fast food place, the sort of business that got going in the late 1950s or early 1960s – 1964 in this case – and never had to compete with the growth of interstate chains. This is the only restaurant for miles on the road from Gainesville to Cleveland, so all the people who work in agriculture or industry in the area get together here for a quick break for burgers and hot dogs. There is a lot of history at play eating here, and working hard behind the counter. The original owner is still here, after 47 years, and he was busy making more slaw while I spoke with somebody who’d been here for a good while herself.

Naturally, of course, you don’t come here expecting a knock-you-down hot dog. Rather, what you get is reliability, atmosphere, great service, oh, and orange milkshakes. More places should serve these. The hot dog was just okay – way too much mayo in the slaw – but wow, if I lived in Gainesville, I’d drive ten miles out of town for one of these milkshakes all the time. Just as well they had no bananas today; if I had the banana shake that I was considering, I’d have missed out.

I thought about making a stop on the way home – it really has been a stupidly long time since I visited Old MacDonald for their barbecue – but I was stuffed and a little tired. Home was an hour away, and I kind of wanted a nap. The next day would prove to be incredibly busy and I would need some rest beforehand.