We were very glad to read that Barker’s, one of the two or three best hot dog places in the city, and sometimes, depending on my mood, the very best, was opening a second location, and doubly so when we read that it would be open in the evenings. When the main store on Windy Hill cut back its single dinner-time operation, on Friday nights, that killed our ability to visit much. Mostly, our Saturdays are devoted to getting out of town or trying something new.

Then again, perhaps we’re unusual in that we enjoy trying something new even more than returning to a reliable favorite. Most people in our neck of the woods with a Saturday free and wanting a hot dog, if they’ve any sense, will either head to the Barker’s on Windy Hill or spend the extra gasoline to motor over to America’s Top Dog, because nobody in the city cooks up a dog as good as these places. Well, I suppose the curiosity factor might lead them to Richard Blais’s new place, Hd1, which everybody started yammering about two weeks ago. I may have to get over that way soon.

Typically, during the fall, when we don’t have family plans on a Friday, we might defer to our daughter. She might want to go to a Sprayberry football game or see a movie with friends. While we plan many things in advance in anticipation of trying something new, we sometimes have to wait until the last minute on Fridays to factor in her plans. So a few Fridays back, she had no plans and Marie wasn’t keen to cook, and the girlchild suggested hot dogs, so we drove over to Barker’s new location.

I do wish they had built up our corridor instead of going to Roswell, but that’s just geographic selfishness, I suppose. There’s just no way to get here quickly from us, but if you live anywhere near Woodstock Road and King, around the Roswell High district, this is a fine little evening getaway. 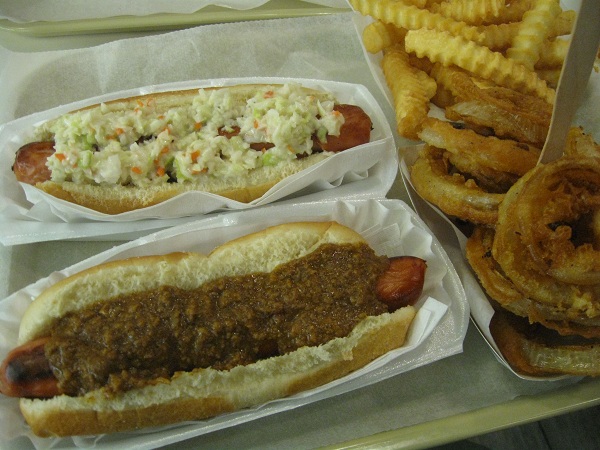 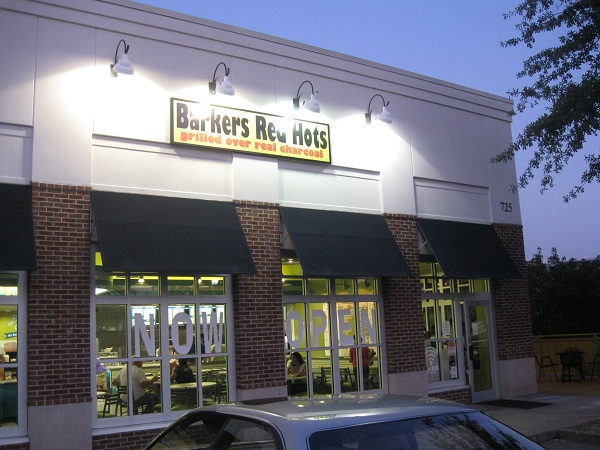 The problem, of course, in taking the family to Barker’s is that it really can get expensive for a family to eat here. I blame the restaurant for having so many yummy things. Their sweet onion rings have a strong claim for being the best in the state, and the beef on weck sandwich, again clearly the best around, really is priced quite high at nearly eight dollars. Normally, we just get water when we go out, to conserve on calories and cost, but their Loganberry punch is just so wonderful that we keep coming back to it. I really do wish they’d offer some combo meal options.

Of course, I could have saved a little money had I just got two dogs like I normally do, but I just couldn’t resist this beef on weck. The meat is just so good, and the salt and horseradish complement it so well. I wish it came with fries. Yeah, okay, so they throw in a bag of Lay’s, but, really, who likes Lay’s? This absolutely delicious roast beef on such a chewy, salty and wonderful bun is not at all served well when accompanied by this imitation “potato” flavored cardboard.

Marie got two original red hots, one with slaw and one with chili. The difference between this slaw dog and the one that I had earlier in the day at the Dari Spot, north of Gainesville, was like Jekyll and Hyde. Honestly, I do have a taste for fast food dogs, but the simple satisfaction of a boiled dog with a mayo-heavy topping is, nevertheless, totally blown out of the water by a charcoal-grilled dog served with a much better blend of slaw, with the mayo not overpowering the flavors of cabbage and vinegar. What’s done over charcoal here is all the difference. One day, my daughter will consent to actually having one of these bad boys, but she is still perfectly satisfied with her steamed “city” dog, served with a ladle of melted cheese.

We’ll probably go to Hd1 before long and see what they have to offer, but for my money, Barker’s is in a very rare class indeed. I’m glad they’re serving the Roswell High community. But seriously, guys, there are some empty storefronts around Sprayberry that could use a big charcoal grill installed. Consider us for your next location, would you?

(Update 8/23/12: Sadly, this location closed in August 2012. The Windy Hill store remains open. Better luck with the next expansion, friends!)