This blog, you might have noticed, is full of hyperbole. I don’t set out to write this way; in fact, I struggle against it. When I was a teenager, I saw a documentary about Jack Benny, and somebody noted the way he enjoyed life so darn much that he would honestly describe every meal that he ate as the very best meal he’d ever had. I think that had quite an impact on me. Yes, I’d love to say that my life really does improve so much every day that the meal I just had is superior to the previous day’s meal. Isn’t that just a magical way of looking at life?

I think that falls into the way I feel about good food. Marie and I have found a habit of trying new things that means so much to us that the best meals we’ve had before, and our favorite restaurants, often seem less promising than something unknown. Something has to be really stunning to make me want to say that I’d rather stop there again than try something new.

Old Clinton Bar-B-Q is that stunning. It is completely fantastic. It might well have eclipsed every one of the hundred-plus barbecue joints that I have tried and become, flatly, my all-time favorite tasting plate of chopped pork. We ate there two and a half weeks ago, and now, going forward, I cannot imagine a trip through middle Georgia where I won’t get resentful and grouchy that we won’t be making the mammoth detour through Gray to visit this place instead of anywhere else.

And, the morning we left, I didn’t even intend to eat here. We had originally planned a trip down to the Jackson area to visit two of the remaining four restaurants on our Roadfood.com to-do list. We would have had a slightly late lunch at a family restaurant called Buckner’s, then walked around High Falls State Park for a few hours, then had a small supper at Falls View Restaurant and come home in the early evening. But Buckner’s didn’t appeal to me that morning. I understand that it’s a good place for food coma excess, and I didn’t believe that I wanted to indulge in quite so much food and then walk around High Falls being miserable.

I have a few two-restaurant jaunts around middle Georgia in the back of my mind. For example, I’d like to pop down to Macon and try Satterfield’s before getting a few slices from Jennoely’s, a pizza place that I visited, and enjoyed, some years ago. Another idea was to follow 3rd Degree Berns‘ path and visit Old Clinton and their rival, Fresh Air, on one trip. Even though I just had an extremely good plate of barbecue at Gainesville’s 3 Lil’ Pigs the day before, that struck me as what I wanted to do. So! A little more driving, two barbecue joints, the state park and catfish at Falls View, while the Dawgs were in Oxford, beating up on Ole Miss, the university where John T. Edge, who also wrote about both barbecue restaurants in his seminal Southern Belly, teaches as Professor Emeritus of Eating Real Good. This was going to be a magnificent day. And it was. 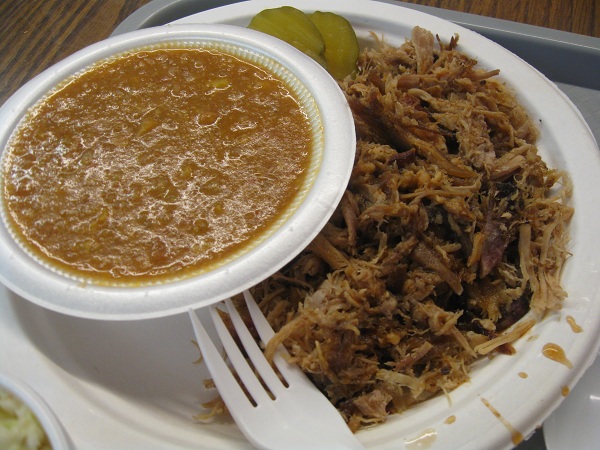 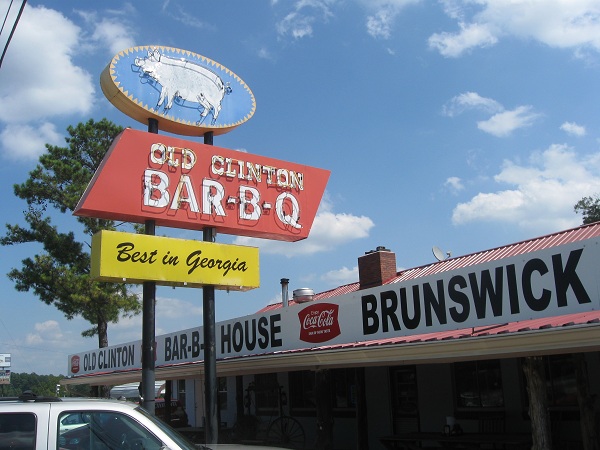 So, the quickest way to Old Clinton appears to be to go down to the city of Forsyth, around exit 185, and drive about thirty miles east. It’s a really nice drive, around the outskirts of a gigantic freaking power plant, Scherer, and its reservoir. It just feels like an aggravatingly long drive. Once you get on US-129, the restaurant is only about another mile on your right.

We arrived pretty late in the lunchtime period, halftime of the game having just started, and there was still a line out the door. Since 1958, Old Clinton has been serving cafeteria-style, with all the smoked meats and sides hot and steaming on guests’ lefts as they enter, and an old-fashioned photo menu above. Marie was pleasantly surprised to see that they offer chopped turkey and ordered that with a side of beans.

I went with the standard plate of pork, stew and slaw, and, once again, I enjoyed a plate of barbecue that was immeasurably superior to any in Atlanta for under seven bucks. The meat was smoked perfectly and the sauce was completely amazing. Marie tried that before me and said, “Oh, you’re going to like this.” It was a thin tomato-based sauce with just the right hint of vinegar and the perfect amount of pepper mixed in. Sweet Christmas, did it ever go well with this meat. Everything was just heavenly.

Marie says that she likes it best when we get different things and are each taken with what the other ordered, but are satisfied in the end with what we got in the first place. That is, she agreed that mine was a darn good plate of pork and stew, but she enjoyed her turkey and beans even better. They were indeed quite good. I’ll never embrace turkey, as it’s just too dry, but I could eat this for Thanksgiving without complaint. The beans, served with ground beef in a magically sweet sauce, were the perfect side.

There’s just no way I’m going to bypass this place in the future. Maybe not on the next trip down to Saint Simons Island in December – that itinerary is pretty firmly booked – but maybe on the way back. And every subsequent trip in 2012. The sawdust porch, the gorgeous old sign, the photographs and drawings all around the dining room of the Goat Man, one of this nation’s great weirdo eccentrics, the great people who work there, everything adds up to one of the state’s best barbecue joints. Possibly the very best. I’ll let you know after the next visit whether my hyperbole hasn’t ebbed just a little.

Everything was downhill from there. Happily, it was only downhill from an A-plus to some A-minuses. I’m not so churlish as to complain about this trip.

So we were making our way to Fresh Air and spotted a sign for the Whistle Stop Cafe. Marie did something that she rarely ever does: she suggested we stop. Normally, it’s me who swings the car around like I’m driving in a ’70s action comedy to a funky beat and wah-wah horns. A very short detour saw us in the town of Juliette, which had been a dormant little boarded-up near-ghost town in the wake of the mill’s closure in 1957. Eventually, a location scout for the film adaptation of Fried Green Tomatoes at the Whistle Stop Cafe found the buildings and realized that, with a little Hollywood magic, Juliette could be transformed into a replica of 1930s Irondale, Alabama, and its hardware store could become the titular restaurant. 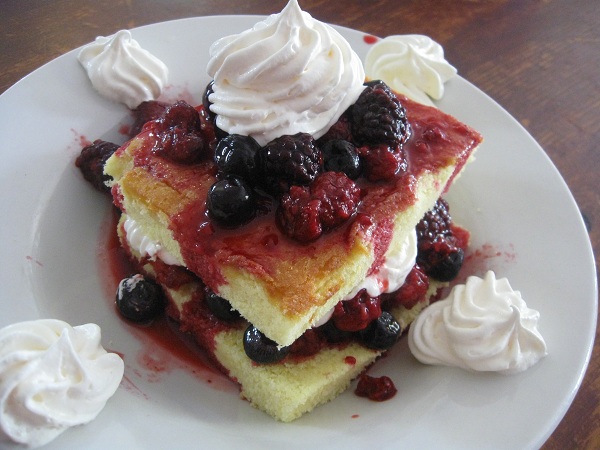 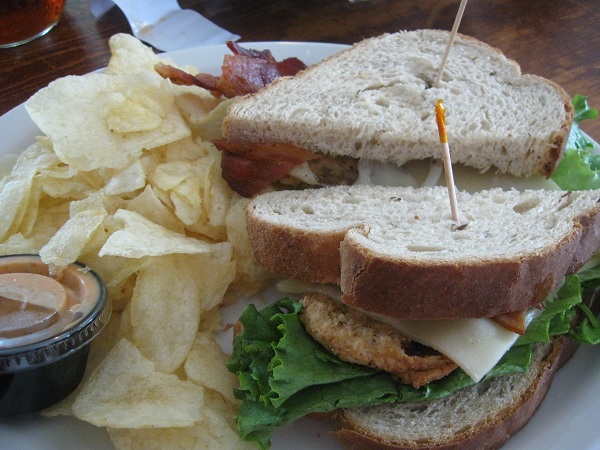 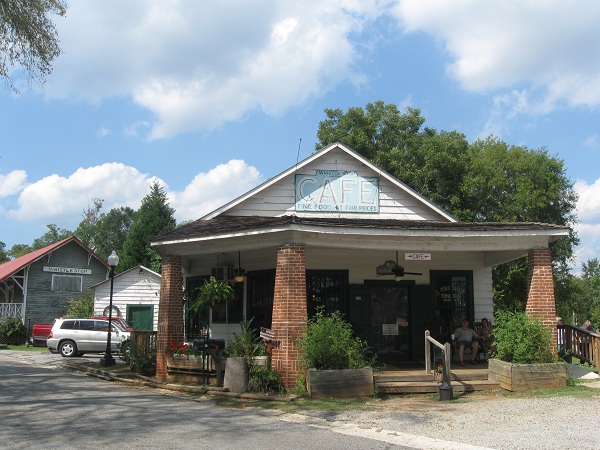 Shortly after the release of the movie in 1991, investors turned the location into a replica of the film’s Whistle Stop Cafe, and led the resurgence of the old central business street into a line of antique shops, budget-priced wine stores and little rooms to purchase jams, jellies and locally-made honey. There is even an “opry” where regional bluegrass and country acts can play. With rocking chairs on the porches for the menfolk, and DVD copies of the movie in every store, this town is quite a little tourist trap. Somebody even bought the mill, packed it full of motorcyles and charges admission while living upstairs, with one heck of a nice view. Oh, yeah, this place is a tourist trap. Fortunately, the food is good enough that I didn’t mind much.

We didn’t plan to eat very much here, but agreed that a little snack and a little shopping break would be a good use of our time. The mixed berry shortcake, made, as you see in the photo above, with five different berries, was a heavenly and decadent treat. Naturally, we also needed to try the fried green tomatoes, and so I ordered a sandwich for us to split. I was incredibly disappointed by the use of boring, dull Lay’s potato chips – surely Golden Flake would be more appropriate for a cafe meant to be in Alabama – but this tomato recipe is legendary for a reason. These were really good and chewy. The batter was perfect and they were fried just right.

They have other things on the menu as well, ranging from burgers to southern meat-and-threes. They seemed to sell some of these things here, but everybody stops to see whether the fried green tomatoes warrant all the fuss. They do. Washed down with sweet tea in a mason jar, and you’re ready for some prime window shopping. Mercifully, we are not presently in the market for weird treasures and junk, that money being diverted into paying for a baby, so we didn’t bring much home. Marie couldn’t resist getting some honey, but we will be up at Hillside Orchard Farms in a few more weeks, and most of our needs for jams and preserves could be filled there.

The detour concluded, we got back on the road for Flovilla, and a stop at one of the state’s oldest restaurants. More about that next time.

Other blog posts about Old Clinton: