I’ve been looking forward to sharing a few words with you good readers about Fresh Air for quite some time. If you’re interested in Georgia barbecue, then this is one of the state’s best-known and most beloved old shacks. It’s a very old one, in fact, having opened in 1929 in a small store between Flovilla and Jackson. The original building was almost all pit, a gigantic brick smoker with a curious L-shape that has been intriguing guests and sparking conversations for many years. The faithful have been making pilgrimages to this lovely stretch of road for decades to hear about their history and smell the smoke from this pit. The building has been remodeled and expanded many times over the years. The upstairs dining room now seats about twenty, with another large room just down a short ramp. On Saturday afternoons, this place is packed.

Their food has never been among my top-something, absolute favorite, but it is still a very wonderful place, and absolutely deserving of its iconic status. If I were asked for a list of eight or nine essential barbecue stops in our state for a traveler to try, I would absolutely include Fresh Air. I would have said that even before finally making a long, long overdue visit to the original location in late September.

I first experienced Fresh Air when they opened two satellite locations around Athens in the mid-1990s. I liked them both equally, and I liked them a lot, even with so many other good places within that legendary thirty-miles-around-Athens ring of great joints to visit. One is slightly north of the city, just past Athens Tech on the way to Danielsville and off to the right a short ways up Old Hull Road. The other, in Bogart, was the one that I visited a little more often. When I first moved to Athens in 1989, that building on the old Atlanta Highway – the one immortalized in “Love Shack” that’s now called, by many, the Winder Highway – was the home of the notoriously-named Peanuts Redneck BBQ. That place closed in 1991 and it was something else for three or four years – was it a Korean restaurant? – before Fresh Air moved in. Man alive, did I ever eat here a lot.

A fourth location is in Macon, and we’ve only stopped here once. Shortly before expunging interstate fast food fuel from our diet, and before planning our road trip dinners in advance, we once stopped for supper in Macon on the way back from Saint Simons on a Sunday. The only places that we knew about were, typically, closed on Sunday, and so we settled for Arby’s. I know that we can all offer terrible Arby’s stories, because I don’t think that any restaurant chain in America has fallen so hard and so painfully as that once-edible place has, but this was just about the worst ever. I remember somebody ordered egg rolls, and I remember thinking that ordering egg rolls at an Arby’s was just about the living definition of setting yourself up for disappointment, but I remember the end result being even worse than predicted. So we went back to Fresh Air, which some selfish person in our party had vetoed for some fool reason, a much, much more satisfying meal was obtained, and a lesson was learned for all of us. 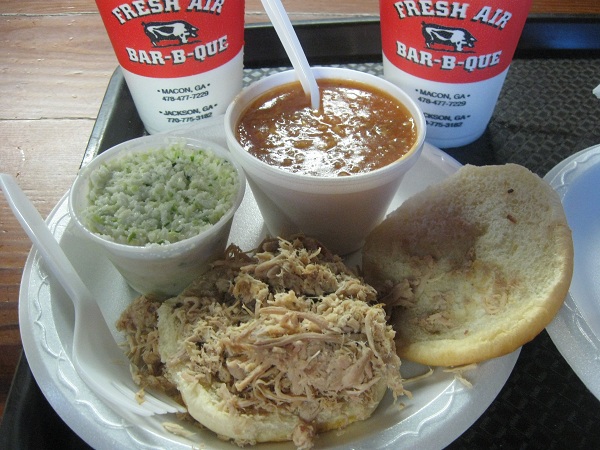 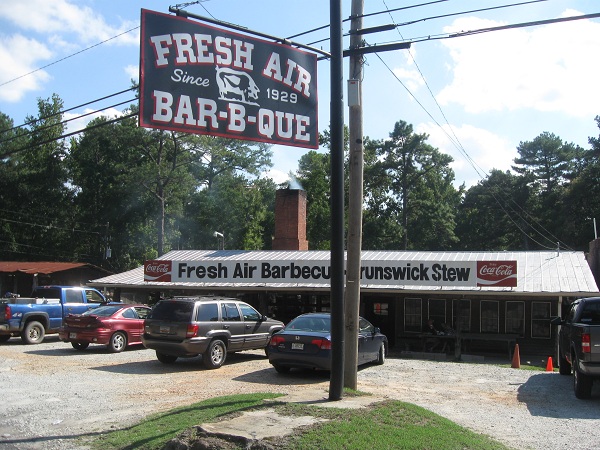 While the original Fresh Air was indeed opened in 1929, it has been in the hands of the Caston family since the mid-1940s. For most of that time, Toots Caston – that wasn’t his name, but when a fellow said that he was going to stand by a name like Toots, you respected him enough to use it – ran the place. According to a history of the restaurant, posted in one of the dining rooms and on the web site, when Toots died, aged 89, in 1996, “he was the oldest actively employed person in Butts County.” Toots’s grandsons, David and George Barber, now own the business. Neither were in when we stopped in on this Saturday. The fellow running the register and keeping the line moving told me that he had actually retired from some other business a few years earlier, but asked George whether he could come work for him so as not to get too bored.

Unlike Fresh Air’s bitter rival, Old Clinton, this is a restaurant that keeps things simple. Now, I don’t mean to disrespect Fresh Air when I say that I found myself bowled over by that upstart, as I think that everybody would agree that both certainly offer some excellent food, and, besides, Old Clinton clearly and without question ripped off more than a few things about their look and shape from the veteran, especially the sawdust-floor front porch. Here, however, you can only order three things: chopped pork, stew and slaw. Well, they have a rack of candy, and some Tom’s brand potato chips, but all that they make in this giant prep room is pork, stew and slaw, and they do it very well.

The pork, like a lot that you find inside the Columbus-Atlanta-Macon triangle, is quite dry and wanting some sauce. It’s a vinegar-tomato-pepper mix, and it brings the meat roaring to life. The slaw is very light on the mayo and very green, and I don’t think you can eat it with your eyes open. The stew is thick and wonderful, owing more to the Virginia style than the Glynn County style. It’s great, every bit of it.

Butts County is a little too far from Athens for people to take food along for tailgating, but the Bulldog faithful congregate here all the same. While the Dawgs were in Oxford beating up on Ole Miss, better than half the people here were decked out in their gameday red and black, with the game being called on car radios. We were in the third quarter, and most of the business was takeout. People had been getting together with friends and family and run out of food and needed to come back for more pounds and pints and quarts, because there was more football to enjoy when we got finished. I could have people-watched all day in this lovely old restaurant full of happy guests. If you have never made a pilgrimage here, then you are overdue.

Other blog posts about Fresh Air: