I don’t know that I’ve ever heard of a restaurant that divides opinion quite the way that Fincher’s does. It would be churlish to deny that it has its very vocal detractors, and even among loyalty-splitting food like barbecue, people either love it to their core or hate it like something on fire. Surprisingly, chief among the nay-sayers is the wonderful 3rd Degree Berns, of whom I have frequently spoken. When he wrote up his visit in 2009, 3DB pulled no punches, giving the venerable original location in Macon one of his extremely rare one star out of ten ratings. (The only other restaurant to rank so lowly with him is Atlanta’s long-past-its-prime Old Hickory House, where polite nostalgia for locals is the main thing on the menu.) 3DB is by no means the only one to turn both barrels on Fincher’s, yet the small chain – presently at four restaurants: three in Macon and one in Warner Robins – does command a following, and is one of those legendary spaces that campaigning politicians are required to visit.

3DB’s loathing is matched by the love of a (mostly inactive) blogger based in Cincinnati, who goes by the handle pFoody, and who gave it a big thumbs-up. His wife is from the Macon area, and his in-laws bring a big care package to Ohio when they visit. On his side is a legion of very loyal diners who have loved the place for years. This is a place that people who move away from Bibb County make it a point to revisit. This is food that means a lot to a whole mess of people. I didn’t remember where I lay along the loyalty line, because I couldn’t remember much about the food that I had. In point of fact, I was not certain until this month that I had eaten there at all.

See, in 2004, I went to meet this friend of a friend in Macon. She was studying at Mercer and lived in a great big house in the historic district that might have been haunted, and suggested that we meet face-to-face for the first time at Macon’s other very well-known barbecue joint, Satterfield’s, for an early supper before going to see a movie. Satterfield’s, as you might know, isn’t open for dinner, leaving me in the awkward position of sitting around a parking lot, early, without a cell phone, twiddling my thumbs in a strange town I’d never visited. Once she arrived, she drove me to some other place just a few miles north. I couldn’t tell you what I ate, then. I was, you’ll understand, substantially more interested in the business of talking to an attractive redhaired law student than I was in barbecue at that moment. I do remember the cute surprise of having an enormous praying mantis make her way into the restaurant, and entertain us for a few moments before we caught her and released her outside. The mantis is about the only bug that I don’t object to sharing a table with.

I saw her a couple more times – the law student, not the mantis – and nothing ever got started, and once my thoughts turned back to barbecue, I started wondering where in the heck it was that we ate. 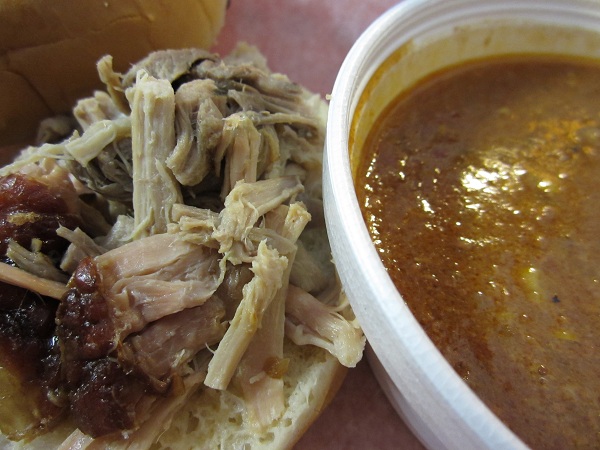 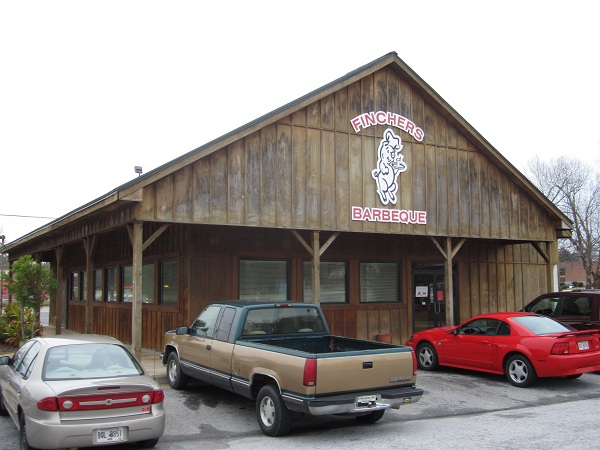 For our fourth new restaurant on this trip up from Florida, we stopped at the Fincher’s location at 5627 Houston Road, about four miles south of the original store. That first location has a lot of history, having opened in the 1930s, but here, parenting needs took precedence over restaurant lore. I read that the original store has, to be blunt, terrible restroom facilities. I cannot confirm whether that is true, but I do know that after two hours in the car, the baby was going to need changing and feeding, and even if 3DB turned out to be completely wrong about the quality of the food – he was – I trusted his description enough to know that we’d want something a little more sanitary and baby-friendly for our son.

We found the place with no problem and stretched our legs and ordered some snacks and some tea. Marie and I each had pork sandwiches and I also had a cup of stew. This was all quite good food. I was not knocked out by the chopped pork, but I enjoyed it, and I quite liked the sauce, which was the usual red-brown tomato-vinegar mix. The stew was the high point, though. This was magnificent, nearly on par with Speedi-Pig’s and Harold’s, and certainly among those I’d consider for the silver medal tier in Georgia. I would not have thought to compare it to Cincy chili as pFoody did in his report, but he’s quite right. It has that wonderful, thin, mealy consistency like diners find at a Gold Star or a Skyline, neither soupy nor thick.

We enjoyed talking with our server, who agreed with our compliment that this was some of the best sweet tea around, and I also spoke with the fellow at the register about my little barbecue experience with the law student in 2004. I described the restaurant as best as I could remember it. I didn’t mention the mantis, thinking that perhaps I might spark a little defensiveness if I were to say something like, “I’m trying to think whether I’ve ever eaten at your restaurant before. See, there was this great big bug on the window by our table…” He confirmed that it certainly sounded like it could have been their store just north of I-16 on Gray Highway, just a short walk of the most interstate-convenient Nu-Way Weiners.

Come to think of it, that particular Nu-Way doesn’t have public restrooms at all. What the heck is with this, Macon?

Anyway, of these four new restaurants that we visited in south and middle Georgia, Fincher’s was our clear, runaway favorite. As far as collecting great new memories and wonderful tastes, the trip was not among our most successful, and my daughter’s sourpuss attitude on this day certainly didn’t help the car ride. Fincher’s, though, met my expectations with good food and a terrific staff. Maybe this location is just more reliable than the original store, but it was a great stop and a good meal.

We had one last visit to make in middle Georgia before going home. We got back on I-75 and made the transition onto I-16 from the south, which we had never had cause to do before. From there, we hopped off at exit 1A onto the Gray Highway that the gentleman had mentioned, and drove twelve miles north of town to Old Clinton Bar-B-Q, which confirmed its place in my affections as my favorite barbecue in the world.

Along the way, we passed by the Fincher’s store that I had visited that time. The mantis is long dead, the former student is successful in her field and fantastic, albeit disagreeably Republican, and Fincher’s, eighty years young, is still excellent.