Sometimes, dear readers, tenuous little coincidences that nobody else either notices or cares about take on a supernatural charm with me. These meaningless little patterns of life tantalize and amuse me more than they do anybody else, and sometimes they inform the resulting writing in this blog. Be aware that I know very well that these chances don’t mean anything at all, that they don’t reflect a larger pattern, and don’t imply anything beyond simple smiles and a chuckle. But what good is life, without sharing smiles and chuckles?

Here’s an example of a restaurant that I’d never heard of before we planned our trip back through southwest Georgia. The plan had been to get back to I-75 after visiting Thomasville and make our way to the town of Cordele, to visit the legendary, and much-loved Smoakies Barbecue. I’ve wanted to stop here for several months; I consider it the last of our state’s most celebrated barbecue joints* that I have not visited, but the darn place is closed on Mondays. So I cast my net a little wider and looked for someplace else to try.

I traced a route from Thomasville to Tifton via the town of Moultrie, figuring there might be something there to eat. I couldn’t find any background to the place, but Urbanspoon did locate a restaurant called The Barbeque Pit, and so we just went there with fingers crossed. The meal that we enjoyed was not bad, and I am glad that we stopped, but I think that we should have made this destination as a backup plan, and actually talked to some locals at a gas station or something, and found a place that generated some enthusiasm from somebody. As it is, all that I can tell you about the Barbeque Pit is that it occupies what was apparently constructed as a pizza restaurant in the late 1960s, that Colquitt County has thrown three or four construction crews into work to dig up streets and rebuild bridges between our route and the business, and that it is only the second barbecue place that I’ve ever heard of with a salad bar. 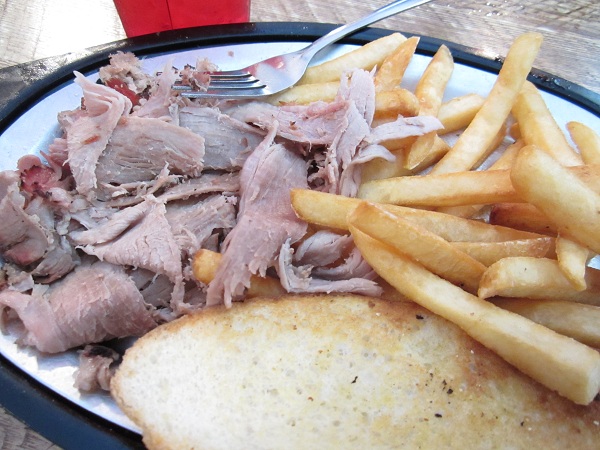 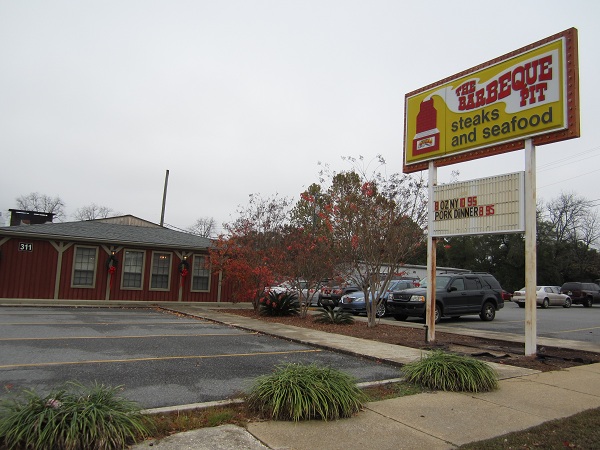 Not mentioned in the chapter last week about King’s Grill in Valdosta was an amusing moment of jealousy sparked by my fellow hobbyist, Dustin of The Georgia Barbecue Hunt. When I cleaned up that city’s barbecue listings in Urbanspoon, I noticed that not one other Urbanspoon-affiliated blogger had written a post about any restaurant in that region. Not one. All that it required, therefore, was for us to make it to Valdosta, have breakfast at King’s Grill – heck, have breakfast anywhere and write about it – and we’d have the Valdosta leaderboard all to ourselves until somebody else hit the area, or a local blog started up. (Surely some student at Valdosta State wants to write about the food in their town, right?)

Saturday afternoon, in the hotel on Saint Simons Island, a day and a morning before we were due in Valdosta for breakfast, I opened up Google Reader to see what was new, and learned that The Georgia Barbecue Hunt had beaten me to Valdosta. Dustin had been to one of the city’s measly five ‘cue joints, the interstate-friendly Smok’n Pig, and given it a write-up. I had a great laugh, feigned outrage, and read the very peculiar report that this restaurant has a salad bar. I am forced to agree with my learned friend from Texas. I cannot imagine what a barbecue joint needs with a salad bar. I have wracked my brain trying to remember if I’ve ever seen such a thing, and if I have, I’ve forgotten. Two days later, there we were in Colquitt County looking at one.

Compounding the curious coincidences, I have mentioned before that I greatly enjoy playing Where’s George, the currency tracking game. Before we left on this trip, I entered a great big stack of marked singles, intending to spend them all through southwest Georgia. I had hits in 84 of Georgia’s 159 counties before we left; unsurprisingly, southwest Georgia is poorly represented in my hit count. (I should point out that only three people are known to have hits in all 159 Georgia counties, and none of those people actually live here. There is no solid evidence at all that spending a marked bill in a county will increase its chances of being hit in that county, but it makes me feel better**.) Anyway, would you believe that no sooner did I get over my mock outrage about Dustin beating me to a restaurant in Valdosta than one of my months-old bills got a hit from Colquitt County, two days before I was due to enter its borders for the first time, ever, with the intent of leaving new marked bills there?

It is perhaps telling that I am writing so much more about meaningless little coincidences than about the food that we purchased. Well, it was not bad, but it was a long, long way away from being worth a long detour to try. The pork, according to our server, is smoked over oak and served sliced. She did not believe that any rubs or sauces are used. The resulting taste is quite mild and, honestly, a little blander than any sliced pork that I can recall.

Many of my fellow hobbyists have suggested that chopping pork risks cutting away the flavor. I seem to be in the minority of writers who actually prefer barbecued pork to be chopped, noting exceptions when the results are too dry and disappointing, but this sliced pork tasted to me like what my learned friends accuse chopped pork of becoming in the wrong hands. Tomato-based sauces are available. They are agreeable, but lack character. This is barbecue as comfort food. It is tame, safe, and, accompanied by frozen fries from a truck, evidence of a place that does not wish to stand out at all.

That sounds, perhaps, harsher than intended. The food is good; if Marie and I lived in Moultrie, then I’m sure that we could come to love it. But we have enjoyed so many striking examples of standout barbecue, of places that pleasantly surprise us, that finding something reliably humdrum so far from home is a little disappointing. This was our third meal of the day in southwest Georgia, and nothing was much better than “okay.” A fellow can’t help but wish for better. In Thomasville, we would, perhaps, have been more thrilled taking Victoria’s suggestions and trying Izzo’s or that pool hall. Here, we might have been more excited by bypassing Moultrie in favor of Tifton’s Shady Lane Drive Inn. I read about this place not long after returning home, and have been grumbling “Next time, if there ever is a next time…” ever since.

If there ever is a next time, it won’t be on a Monday, either. I really do want to try Smoakies one day.

*(For the record, in no order and not making considerations as to taste or personal preference, I think that a list of Georgia’s most celebrated-by-writers, popular among the public, and, perhaps, legendary barbecue shacks would include these ten: Smoakies, Fincher’s in Macon [about which, more Wednesday], Vandy’s in Statesboro, Country’s in Columbus, The Georgia Pig in Brunswick, Sprayberry’s in Newnan, Old Clinton in Gray, Harold’s and Fat Matt’s in Atlanta, and Zeb’s in Danielsville. Given another ten or fifteen years of press and memories, we might could add Fox Brothers in Atlanta, Sam’s BBQ-1 in Marietta, and Southern Soul on Saint Simons Island.)

**(Just one day after posting this entry, one of the bills that I spent in Lowndes County on this trip was hit there. So, once in a while, it does work. The coincidences continue!!)