I had two very good reasons, I thought, for picking Henderson’s as a place to visit in Thomasville, but neither of them were enough to sway our friend Victoria about the plan. She grew up in Thomasville and assured us that there were many better restaurants*. She said that we were certain to enjoy a much-loved pool room that serves awesome chili dogs, and I must agree that does sound like fun.

As I have mentioned many times over the last few months, not very many bloggers seem to use Urbanspoon Georgia. The Atlanta service gets a fair amount of activity, the other nine major metros in the state a little less, and rural Georgia’s catch-all only a trickle, but enough for me to notice a very entertaining blogger, Sweet Tea and Bourbon. He’s based in Tallahassee and occasionally makes his way north. He’s covered Thomasville better than anybody else with a blog, and I wanted to stop in someplace about which he had already written. A few of of his selections stood out to me, but Henderson’s won out over Grandaddy’s Barbecue (which he did not like) and Izzo’s Soda Fountain (which he did) on the biased basis of that being Marie’s father’s family name. So now we have visited both a Marie’s and a Henderson’s. At some point, we might have to track down a restaurant with one of my names.

Henderson’s opened in 1949 and is still family-owned, although the current Henderson in charge, Ralph, seems to be doing things a little differently than the classic and simple nature of how the restaurant was when it opened. For breakfast and lunch, this place serves up basic fast food-style burgers, fingers and fried chicken. A good comparison point for Atlantans might be The Varsity or Zesto’s; the burgers taste about like those, just classic, basic food at very agreeable prices. This is what I ordered, and it was fine for what it was. 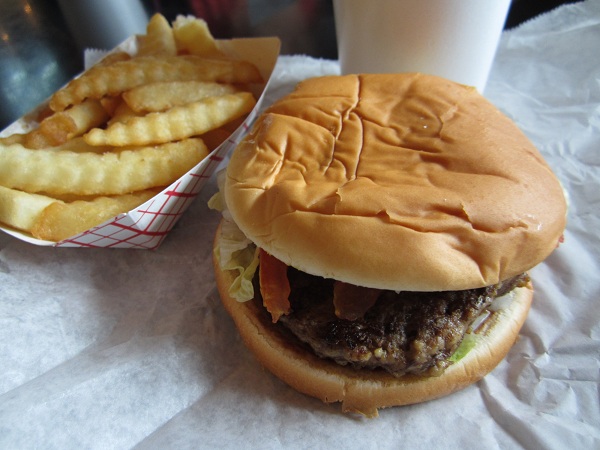 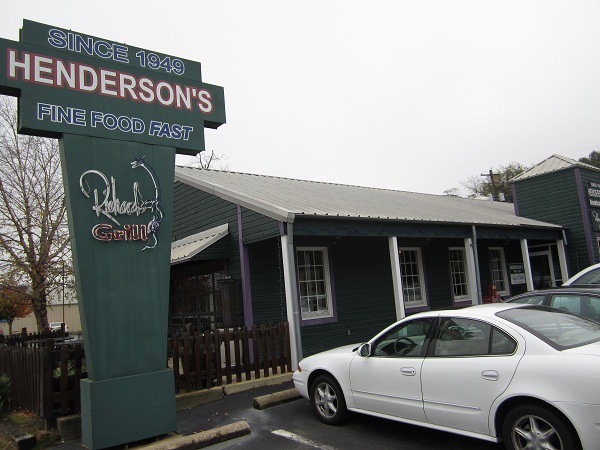 But while Thomasville may be a pretty fair drive from any thriving big cities, they’re obviously aware of trends. While the basic burger is just a common fast food patty, they are experimenting with a more expensive selection, made from local, grass-fed beef. This is the standard at many of Atlanta’s newer and best-known burger places and it seems to do extremely well for restaurants like Farm Burger, among many others. I honestly didn’t see the little signs that highlighted this special, but they did have the good sense to advertise it with a small flyer in our bag. The lunch crowd on this Monday was pretty huge, and I expect more than a few of them are probably willing to shell out a few more dollars to try out this hormone-free beef. I hope that it does well for them.

Speaking of the lunch crowd, there sure were a lot of high schoolers getting carry-out orders here. I suppose that Thomas County has pretty slack policies on leaving campus to find something good to eat.

In the evening, after closing for a couple of hours, the restaurant reopens as a nice, upscale place called Richard’s Grill. I was reminded of how Blossom Deli in Charleston, WV did things under their old ownership. The menu includes nice-sounding things like salmon, either grilled with pecans and sesame asparagus, or with sauteed vegetables and cauliflower mash. I suppose they are trying this to catch some of the frustrated people who don’t wish to wait for two hours for a table at either Liam’s or Jonah’s. I’m not sure that I can believe that Henderson’s very basic, 1960s LPs-on-the-wall decor goes all that well with the fine dining of Richard’s Grill, but I like the sound of it.

Thomasville really is a heck of a ways off the beaten path for us. It is quite a detour to get over here from I-75, and I don’t imagine that, even if we are again in a position to come back from Jacksonville via Valdosta, we can really justify going this far out of the way, but I am certainly glad that we made the trip to see the place, and I am glad to have had the chance to visit something in Sweet Tea & Bourbon’s coverage area. Should the road ever happen to actually send us back, however, we drove past that pool room that Victoria told us about, and darn if that doesn’t look tempting. Actually, there’s a similar place in Monroe, come to think of it, and that’s a lot closer. Hmmmm.

*Victoria dropped me a line shortly after I posted this review, clarifying her position, or rather, reversing it entirely: “For some reason I thought you were talking about Chandler’s which is a much more ghetto place to grab a bite in Thomasville. I actually lived a few blocks from Hendersons and used to swear by their bacon, egg, and cheese breakfast sandwiches. Might need to revise your review now cause I actually would have recommended them! Haha. Blame Mommy brain.” We’ll remember this incident the next time that Victoria recommends anything whatsoever.