In retrospect, it’s almost funny that I told Chris that we might see a little bit more of north Florida on this last trip down to visit him. We left after sunset. We didn’t see anything. Well, as Marie and the children slept, I did see a really funny series of signs along I-10. Heading west, there’s a sign that reads “Lake City: Next 3 Exits.” Then there’s an exit for US-90, and then you enter the Osceola National Forest and spend about twenty miles driving through the darkness. Then you exit the forest and a sign reads “Lake City: Next 2 Exits.”

Returning to Georgia, we stopped for the night at a terrible motel off exit 2, about fifteen miles south of Valdosta. Traveling with babies, parents must be used to the reality that sometimes, they’re going to have awful nights’ sleep and keep you up until dawn, and that you’re going to leave your hotel and get halfway to breakfast before turning around, remembering that you left a pillow behind. One of those nights and mornings, you see.

Valdosta is a very pretty town, but I get the impression that it was once so much more gorgeous and we visited as some needed improvements have already occurred. It probably wasn’t so pretty five years ago. The economy’s been bad everywhere, but Valdosta seemed particularly hard-hit by restaurant closings. I have mentioned in previous entries that I have been cleaning up the listings at Urbanspoon. Before I got started, there were more than thirty restaurants in Urbanspoon Valdosta in the barbecue category. Once I changed categories for all the erroneously-listed wing places and noted closures, only five remained. Five. Two of those were Sonny’s. A derelict old Fina station between the interstate and downtown is a bitter reminder of how things have deteriorated. Personally, I was excited to see an old Fina sign, having forgotten that it existed. Fortunately, downtown is a little more vibrant. If we had come a little later in the day, we certainly would have stopped into a combination record store and hot dog shop, but as it was, we had breakfast in a fantastic old greasy spoon that has weathered the tough times well for more than sixty years, the King’s Grill. 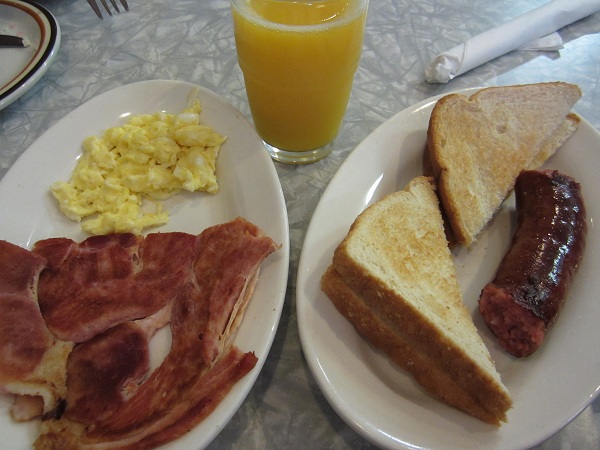 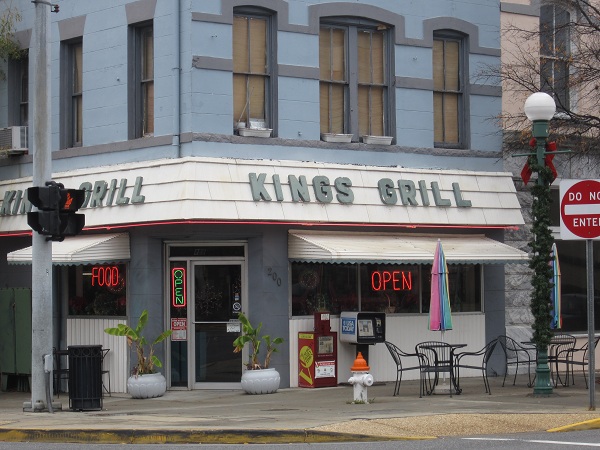 Places like this, the atmosphere means as much if not more than the food. Honestly, the breakfast was not much better than okay. It was cheap and it was filling, but the impression we get from every source is that this is a place best experienced at lunch, when the kitchen is putting together some tasty, fresh, blue plates and other meat-and-three concoctions.

We were the only guests for a little while, and talked with the staff for a short time before two other guests arrived, and then they really impressed us. I love seeing how well places treat their regulars, and this couple was greeted like old and priceless friends. “Where have you been,” the owner called. “We’ve been worried about you!”

The building was actually constructed in the 1890s, and as far as anyone can remember, the restaurant’s space had been an ice cream parlor in the 1930s. Today, there are elements of very cute design left over, from the tabletops to the old fixtures behind the counter and a number of hand-painted signs with sassy slogans. Somebody made a half-hearted effort to make the interior otherwise look like “a fifties diner,” and longtime readers know how I feel about doing this the wrong way. There are some old 45s on the wall, but otherwise no genuine treasures, just latter-day repackaged nostalgia like the typical I Love Lucy posters and one of those obnoxious prints of James Dean and Marilyn Monroe hanging out at the malt shoppe. Diners did not actually have these things in the 1950s.

Downtown Valdosta is full of lovely old things to see, including an old jewelry store with an awesome retro sign, and the gorgeous Dosta Playhouse, built in 1941. Some of the old news clippings on the walls inside King’s Grill make for fascinating reading. There’s a great story from the 1960s about an anonymous good samaritan who used to make his way around Valdosta giving strangers ten dollar bills.

It’s a neat place. Should the road take us back one day, I’d like to see that record store and have a hot dog. If only somebody would open some more barbecue restaurants…