Readers with quite long memories might recall that Brewer’s Pizza was the place that our friend Chris wanted us to eat when we were in Jacksonville one year ago, but we ran afoul of their hours and wouldn’t have time during our brief visit. Brewer’s is actually located about an arm’s length outside the Jacksonville / Duval city and county limits, in suburban Clay on the southwest side of the metro area. Clay County has stricter policies about the times that a restaurant may serve alcohol on Sundays, and, consequently, Brewer’s doesn’t bother opening up until 2 pm, missing out on the possible revenue of the early NFL games. Now that I’ve been here, and seen the reasonably-sized crowd watching football and spending money, I remain baffled as to why they chose to open in Clay.

So, a couple of Sundays ago, we dropped Marie’s sister Anne off at the airport and made our way back down through the sprawl to Chris’s place, and spent an agreeable few hours hanging out with him and his friends. Much of this time was spent playing Illuminati, a simply fantastic strategy game to which I was introduced in college and have played off and on whenever the rare opportunity has come. I still think that the game is best played with a chess clock, but if you enjoy games that require manipulation, cooperation, backstabbing and planning three turns ahead, then I strongly recommend you find a copy of this game and between three and five friends. It’s made by Steve Jackson, and any decent hobby store should either already have it in stock or can order it. I got stuck playing the Gnomes of Zurich, my least favorite group, but still ruled the world anyway.

Unfortunately, both time and the needy baby prevented Marie from playing any, which was a shame as she’s meant to be the one in the family who likes games the most. I feel bad that she missed out, but not so bad that I’m going to volunteer to play Carcassone with her. I just don’t get that game. I’d have more fun painting ceilings in the dark.

Eventually, time came for the group to decamp to Brewer’s. Chris had phoned ahead and booked a table for the eleven of us. The restaurant, whose exterior I forgot to photograph, is in a small strip center just outside I-295. It’s a brewpub first, a sports bar second, and a pizza place third, and while the crowd included plenty of locals in Jaguars jerseys and faithful in Bucaneers tops, that game was long over and just about every eye was riveted on the Broncos game, where, once again, local hero Tim Tebow was leading his team to yet another improbable fourth quarter comeback and overtime victory. Earlier in the day, Anne had reported a conversation with some friends in Memphis. “It just doesn’t seem right to hate that guy, because he’s so darn nice. But we hate him anyway.” I’m sorry, Jacksonville. Perhaps you’ll never understand. 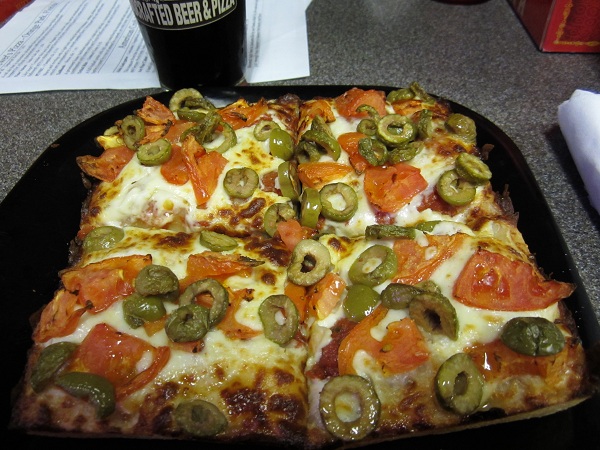 According to Chris, Brewer’s Pizza only serves food at all because Clay County’s regulations require that they have a kitchen in addition to their brewing facilities, and that we’re fortunate that they’ve hit on a good thing. I think that he was trying to stem any possible disappointment, knowing that neither of our previous trips to his city had resulted in any raves from me. Honestly, though, this is quite good pizza. A couple of months previously, we stopped into Columbus, Georgia’s Cannon Brewpub, and their pizza is not fit to be mentioned in the same breath as these big square treats in Florida.

The specialty here is on individual-sized pizzas that are called Florida Growlers. These are baked, Detroit-style, in a deep dish square pan that gives the edges of the crust a satisfying crunch but leaves the interior thick and chewy. Since Chris, a Michigan native, doesn’t drink beer, it’s the pizza that brought him here, and I agree, it is a whole lot better than many I have had. I enjoyed mine with tomatoes and green olives, and I enjoyed it a lot. Detroit-style pizza has an entry at Wikipedia for those curious to know more about the distinction between it and other varieties. Having been lulled into complacency by chain delivery pizzas and their give-each-version-a-trademarked-name varieties, I suspect that most of us in the Southeast probably never knew that delivery-deep-dish originated in the Motor City.

The beer is just downright excellent here. This is another of the great bars that I’ve found that doesn’t sell the boring national brands at all. They have six different house brews available at any time from a lineup of eleven, and I tried the Tribal Rite, an incredibly satisfying oatmeal porter. I absolutely loved it to bits. Amusingly, my daughter has been making a really tedious pest of herself lately, asking, “Hey, Dad, whenareyagonnaletme have a BEEEER?” I offered her a sip, she looked at the black, mean-looking brew, curled her eyebrow and passed. Chris’s roomate Joey shared some of his selections with me. He had some beast with an 11.8% ABV that went down about as smoothly as old transmission fluid, and a much, much lighter Southern Pecan Ale that was so smooth that I wouldn’t think twice about offering some to the baby. I certainly preferred the house offering and would have liked to have also tried the red ale, had I not needed to drive on through the evening to get a hotel in Georgia.

Chris is very excited because the 7-11 convenience store chain is finally about to open some stores in Jacksonville. They have several locations in middle and south Florida, but otherwise they seem to be completely absent from our usual travel radius, with the nearest one somewhere between Raleigh and Richmond. We joked about how Chris goes miles out of his way to feed a Slurpee addiction, and once 7-11 finally gets settled in town, he’ll be making Slurpee runs the way many people take their debit cards to a Starbuck’s.

He is quite emphatic that, even though the machinery is built by the same company, Slurpees are not the same as Icees. Apparently, Sheldon from The Big Bang Theory concurs, although he foolishly comes down on the Icee side of the debate. I agreed that the next time we come down to Jacksonville, we’ll have to arrange for a blind taste test.

Other blog posts about Brewer’s: