So, finishing up our little jaunt down to Columbus, we returned from Phenix City with a late sack of lunch for Maggi, who felt much better after a little longer rest and recuperation. I’m sure seeing Auburn get routed in Death Valley helped on that front. (The Clemson Death Valley, that is, and not the LSU one, not that it matters overmuch who routs Auburn.) The four of us gossiped and caught up and let the baby show off his mighty lung power, and our hosts persuaded us to reconsider our dinner plans.

We had originally thought to return to Country’s Barbecue, just at a different location, but Ric and Maggi were certain that we’d enjoy a new restaurant on 12th Street even more. Marie agreed, which was incredibly sweet of her, as I know that she really likes Country’s, and was not as completely thrilled with the snacks that we enjoyed in Phenix City as Ric and I had been. We agreed to return to Country’s when we next come through town, in a month or so.

Before eating, we went out to do a little more walking, and so the five of us went down to the city’s lovely Riverwalk and unpacked the stroller, allowing the baby a short nap as we enjoyed the sun and some surprisingly high temperatures. The Riverwalk holds a special place in Marie’s affections. When we were in Columbus a year before, we took a stroll here after returning from Auburn, and Marie became completely exhausted and needed to sit down and rest. This had never happened before; it’s invariably me who needs to take a break. Marie became suspicious about her lack of energy and we confirmed a week later that she was worn out because she was pregnant.

So this trip was much easier on everybody, although the city really could do a better job making all these sidewalks just a little more stroller-friendly. When we made our way back up to the street level, on the south side of the Trade Center, we had to keep dropping the stroller onto the street to get around the lack of ramps at the curbs. They must try harder there; I’m sure residents in wheelchairs can’t be pleased with them.

Uptown Columbus is apparently at something of a crossroads. The city spent decades with a moribund and decaying downtown, until finally, in the mid-1990s, business owners banded together and started investing in refurbishments and opening bars and trendsetting restaurants and coffee shops to appeal to twentysomethings. As the main drag of Broadway, termed “Uptown,” roared back to life with the River Center anchoring one end near the hotels and convention space, Columbus State University elected to build a campus and dorms here. Now the strip is thriving as vibrantly as any strong college town, with bars and bookshops and, briefly, a pretty good record store, and people are starting to complain about all these places selling liquor while underage kids are a few flights up trying to study and avoid the temptation of the demon drink. Never mind that the dorms wouldn’t be there if the drink wasn’t.

One of the restaurants that briefly flourished just outside this corridor was, if I recall correctly, Sushi-a-Go-Go, located a block from the main action, across the street from the main post office. Last year, the owners decided to scrap their menu of Thai cuisine and sushi and start fresh with a modern take on Southern cooking. Reopening last November as The Black Cow, it is an amazing success. This was an eye-poppingly great supper. You’ll forgive the worse-than-usual photography with this entry; pictures do not do this food justice. 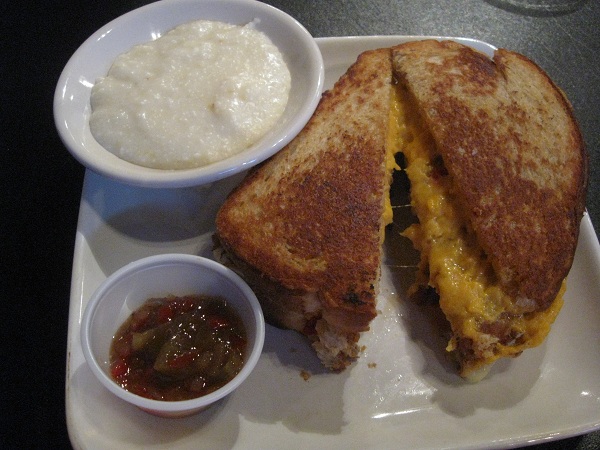 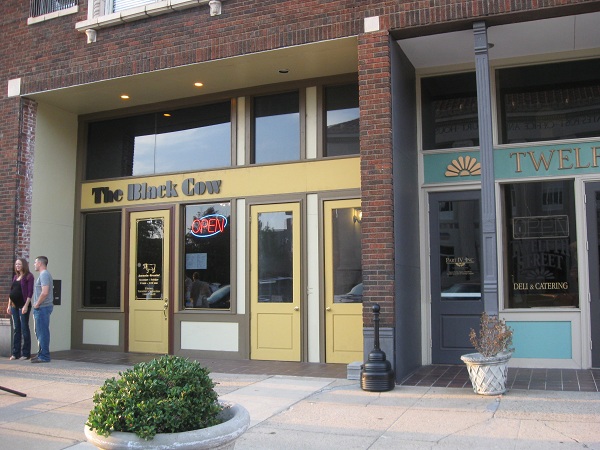 I had a sandwich the likes of which I’d been dreaming about all my life and never realized it. It’s fried green tomatoes, bacon and pimento cheese, with a side of grits. I thought that was completely perfect, and was never so sympathetic for Marie’s unfortunate dislike of bacon, until Maggi offered us a bite of her meat loaf. You’ve never had meat loaf this good. I dated this girl once who made the best meat loaf I ever had and I still didn’t like the stuff. I want an order of this for myself. It is completely remarkable.

The restaurant reminds me of Last Resort Grill in Athens, only without the amazing wine list that celebrated place has. It is a similar take on upscale cooking with a Southern twist, although I have to say – and Marie, who loves Last Resort more than anybody, will assuredly not agree with this point – that while I’ve had some grand slams in Athens, and won’t hear a bad word spoken about it, I never had anything there as amazing as either my sandwich or that meat loaf.

No, Marie won’t agree with that assessment at all; she was, unusually, in the mood for fish, and had a mahi-mahi sandwich and fries, and found them quite ordinary. She really missed out, but she made up for it with her wild dessert back down the street.

When Uptown Columbus started coming to life, the Cannon Brewpub was one of the places that sparked the renewal. It was the first brewpub in the city, and is apparently still the only one. It is a hugely successful venture, almost always busy and popular with families.

Unfortunately, while the beer is as good as ever, and it is indeed excellent, consensus seems to be that they really have taken their eye off the food lately. A new management company – our server actually called them a “hospitality company,” boggling the mind – took over daily operations and apparently raised the prices, leading to some grumbling. Our wonderful friend Cheryl, fired up by Auburn’s loss and ready to kick somebody, met us here and ordered a pizza. What she received for her $12.99 can be bettered in the frozen food section of my Publix grocery store for considerably less. 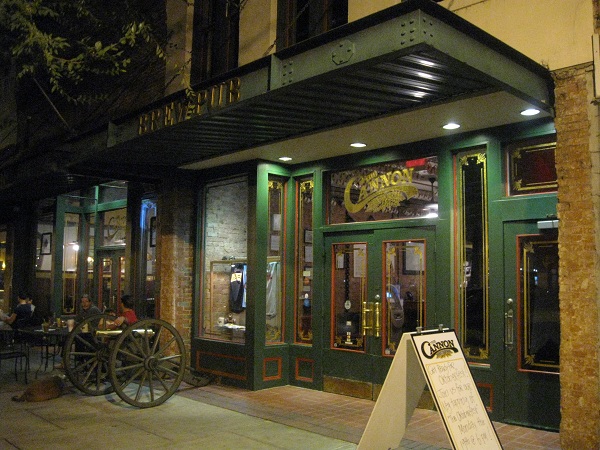 The desserts, on the other hand, are still knockouts. Marie had this chocolate thing with a raspberry drizzle. I chose to photograph that, and not the beers that we enjoyed, because I’m dashed if I can figure how to shoot glasses of beer and make them look in any way distinctive. (The resulting photos, sadly, were too awful to show you!) This was an excellent cake, and really a fine way to wrap up a day’s good eating. Marie would probably tell you that this was her favorite meal of the day, particularly when washed down with the house’s excellent root beer.

The beers were indeed really good, and I quite liked the restaurant’s cute policy with mugs. You can buy a numbered mug here for $50 and thereafter enjoy a pint for $1 less than in a glass. If you’re planning to make this place a regular haunt, it pays for itself in a few months.

Sadly, Ric had not been in for quite some time – his mug had long since been paid for and then some – and was surprised to learn that his mug had been destroyed! They are kept on hooks in the entry way, and some time back, a rack of hooks fell off the ceiling and the mugs shattered on the floor. The Cannon has been waiting for all their mug owners to return and reclaim their lost property. So Ric filled out a form and enjoyed his beers from a pint glass like the rest of us.

I tried the Ironclad Stout, which was perfectly acceptable, but the Red Jacket Amber was the real winner. I have not had a bottle of John Courage in better than ten years, but this tastes exactly as I remember that. It was my favorite amber ale. I could indeed drink a fair amount of that. Unfortunately, of course, I’m such a lightweight these days that two pints are my limit. Well, two pints and a few sips of Marie’s root beer. This trip really did drive the baby to distraction and the loud music in the Cannon was too much. He started hollering, unhappy, undernapped, and overstimulated. We called it a day around 9 and Marie took the wheel to drive home.

We’ll be back in town before too much longer to hike around Providence Canyon. Certainly before Thanksgiving, anyway, and probably sooner. Much more barbecue in the region awaits us, and, probably, another glass of this wonderful root beer. Mmmmm.

5 thoughts on “The Black Cow and The Cannon, Columbus GA”