When the opportunity came to revisit Jacksonville and spend a little time with our friend Chris, I didn’t have to look very hard to find a place to get a little lunch first. Angie’s Subs seems to be incredibly popular and is ranked fairly high – it is the # 3 restaurant in Urbanspoon Jacksonville at the time of writing – and since we’re only realistically able to pop down to northeast Florida maybe once a year at this time, I’d like to take these rare opportunities to say that I’ve been to one of the area’s most loved places.

Our previous two visits to Florida had seen us going to Saint Simons, then visiting Jacksonville, returning to Saint Simons for a last evening and going home the next day. This time, though, we were going home from Florida, and it’s almost the same distance to go back the I-10 / I-75 route as it is I-95 / I-16. So, since we were going to head back through a part of Georgia that we never, ever see, this gave us the chance to schedule a pretty fun set of detours through cities and towns new to us. Marie did request that I rein in my enthusiasm just a bit and not end up in Pensacola or Mobile – “But it’s the same interstate!” – but it turned out that Angie’s became the first stop of several that I will share over the course of the next week. Perhaps, should our schedule bring us this way again, we might try going home via Waycross on US-1.

We left Saint Simons around ten, with Marie’s sister Anne joining us. Conveniently, she needed to catch a plane home from Jacksonville’s airport, and we were headed that direction anyway. Angie’s Subs is a pretty long way from the airport, but we didn’t mind backtracking. Or we wouldn’t, if the stretch of US-90 on the east side of the city wasn’t so utterly hideous with identical single-story strip mall sprawl for such a long time. At least getting there included a trip over a beautiful, very high bridge and a gorgeous view, and once drivers get past the nasty sprawl and enter the city limits of Jacksonville Beach, the road finds a soul again. If Angie’s is any indication, it’s a funky, eclectic and laid-back soul. 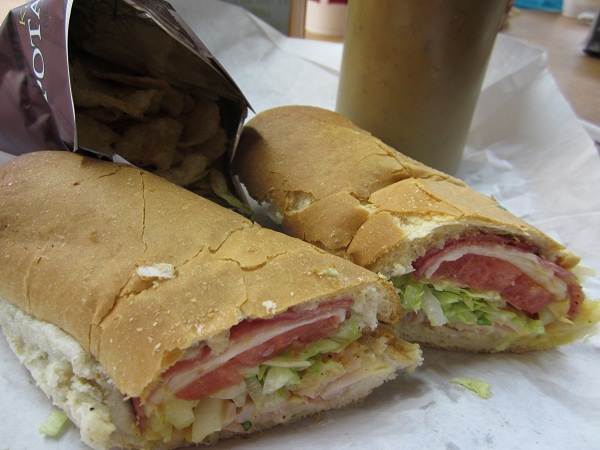 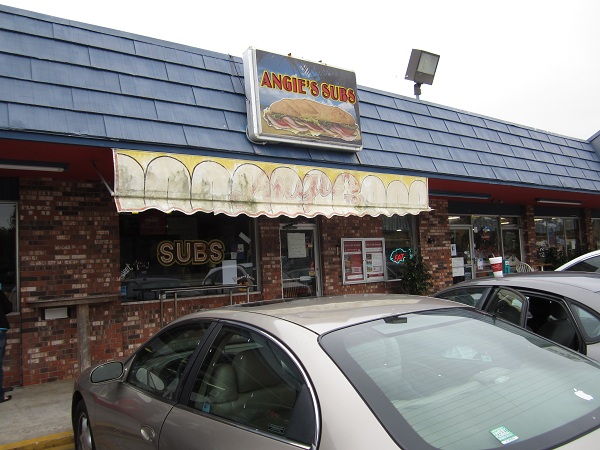 Jacksonville Beach is a separate town of 21,000 from the city/county conurb that mostly stays inside the I-295 / FL-9A perimeter. While most of the rest of what little we’ve seen of north Florida made way for the Wal-Mart, it looks like this place never will. The sub shop is inside a Frankenstein’s monster of a building that was probably erected in the late 1950s. Then, there was a gas station on the right side, with two storefronts. Eventually, Angie’s opened in the center, and a coin laundry on the left. Over time, the business expanded as the gas station and the laundromat closed, and now the whole building provides a very awkward home for Angie’s. What had been their front door is now closed off. Dozens of signs attempt to direct guests over to two registers on one side to place sandwich orders before your group shuffles down to a different cash register to collect payment. The sensory overload is enormous, in part because nothing is very clear at all; the sloppy, cluttered signage looks like a bored middle school girl threw it together.

It takes a little work to take it all in, but I loved it. It’s a loud and wonderful million miles from the minimalist austerity that informs much of the design of contemporary modern American restaurant experiments. This is tacky and garish and huggable. When I ordered a “Volcom Special,” named for a surfing-and-swimwear company, from a little sign by one of the registers, I wasn’t even a hundred percent sure what I was getting, just that the collage-and-glue cardboard sign screamed loudly enough at me. Turns out it was turkey and salami on a toasted bun with a liberal coating of the shop’s “Peruvian Sauce.” This is a sweet and very zesty mustard sauce that Angie’s sells in bottles from a hard-to-see shelf by the register, and which is available from gigantic squeeze bottles on each table. Everything here is gigantic. The sweet tea is dispensed from a thirty-two gallon bucket.

The food was just fine. We’ve said before here that it’s very hard to go wrong with sandwiches, since there is so little variety in delivered deli meats or their preparation. As long as it’s good meat, it’ll be a good sandwich. But the toasting and the sauces and excellent sweet tea, in a silly and tacky mess of a restaurant all added up to a very fun lunch. The staff seemed to be having a terrific time, the music was loud and the regulars, ready for some football, were looking forward to one of the NFL season’s rare victories, over Tampa Bay. Sadly, Angie’s had actually retired one of their sandwiches a couple of weeks before we arrived, as Jack Del Rio had been fired as the Jaguars’ coach. I think that they might have renamed the thing after the interim coach.

Anne was kind enough to buy our lunch as thanks for the ride to the airport, about which, I have to say, that is a spectacularly easy airport for commuters dropping off family to use. Good on Jacksonville for making that so simple. We hope to see Anne again in the spring; we’ve penciled in a trip to Memphis before it gets nasty hot again.

Other blog posts about Angie’s: