Marie and I had been dating for long enough that her father had asked whether I was thinking of making an honest woman out of her. This was something that I intended to ask him about a couple of months later. Getting the parents’ permission first, that sort of thing. That came in time, a few months down the road. But she was still living in Athens and we were enjoying an agreeable long-distance relationship for a little more than a year at that point. I don’t remember whether we rode down from Athens or from Atlanta, but it was Christmas four years ago, and her dad took us to supper at Bennie’s Red Barn, which is the oldest restaurant on Saint Simons Island, and one of my favorites.

Again with the nostalgia, this is a place that I’ll always associate with thinking about getting married. It’s the restaurant’s contention that many couples make that decision here around Christmas, with fellows going down on one knee in front of the gigantic fireplace and the applause of all the guests. For our part, we made it a little more private, a few months down the line.

The restaurant opened to the public in January, 1955 but it kept a pretty low profile for forty years. There wasn’t a sign out front or an advertisement in the annual tourism magazines until Bill Clinton was president. This was an old-fashioned supper club, with a small menu recited by the waiters. I don’t think that they even had a printed copy of the menu until a few years back when they finally conceded to have one printed in the “Menu Books of the Golden Isles” things in hotel nightstands. 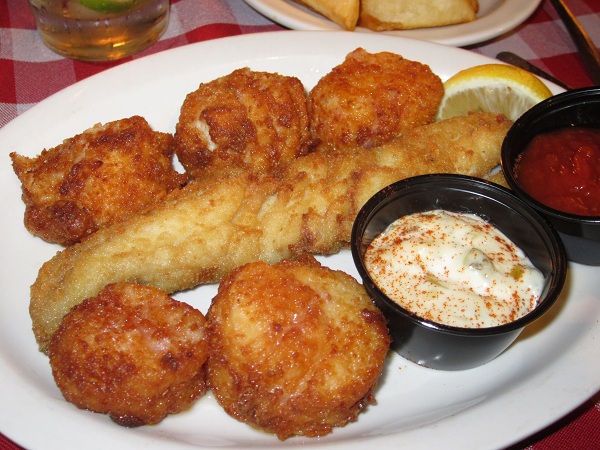 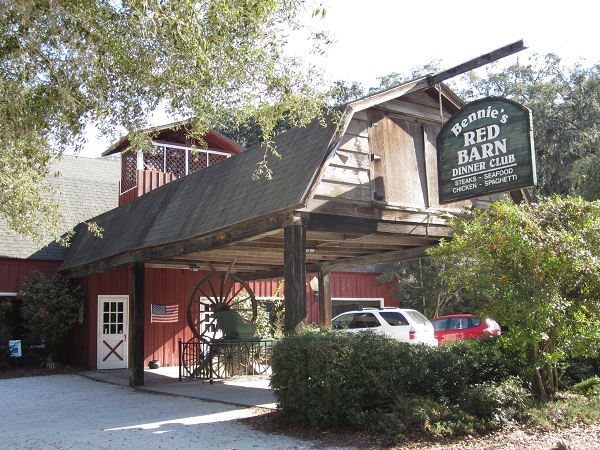 We were back on the island two Saturdays ago for an early Christmas, since this was the best opportunity, with everybody’s schedules and plans being hectic, to assemble Marie and her brother and sister at the same time. Part of the festivities included a trip to Bennie’s Red Barn. As the name suggests, it’s a big, red barn with a soaring roof, tall enough inside for a huge Christmas tree in the center of things. All of the wood in the building was cut from Saint Simons oaks. It’s very noisy inside, with the holiday season bringing in a stream of huge parties, and a staff of some of the best, most professional servers of any restaurant that I’ve ever seen handling the chaos with precision and professionalism.

Bennie’s greatest reputation is with their steaks, but I prefer to have the seafood, since we’re on the island and all. They start everybody at the table with a salad of wilted lettuce and a strong vinegar dressing, which is completely wonderful. The soups on this most recent visit included French onion and Brunswick stew, which was served piping hot, black as coal and, unusually, full of green peas. I had the scallops and bass, and they were succulent and completely wonderful. I like this place a great deal, and I’m glad that the food is good enough to justify the many happy memories that many couples and families certainly have.