Since we started the blog almost two years ago, we have been asked once or twice when we were going to feature the city’s most popular and praised barbecue place. The honest answer is that we were in no particular rush. After we tried the place in 2009, we knew that anything and everything else was shooting for second place, and that we’d come back to Fox Brothers on some special occasion or other. The occasion turned out to be my fortieth birthday, and so we invited a host of friends in town to come join us. If you’re going to do this, I’d make sure to do it on a nice day when everybody can sit outdoors. We had a party of thirteen, and since Fox Brothers neither takes reservations nor really has the space to handle large groups like ours inside, it was a little challenging and frustrating getting everything together. 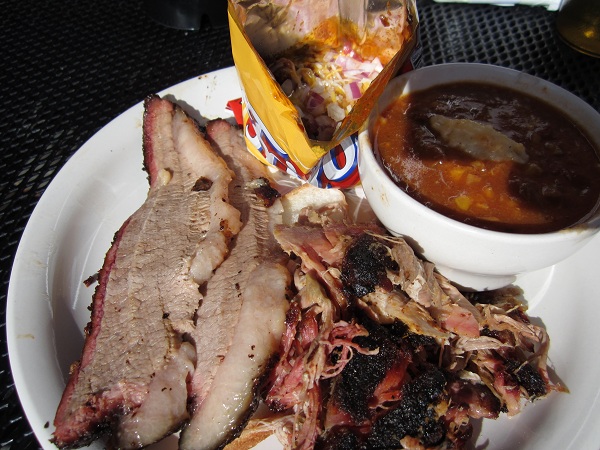 The restaurant opened in August 2007 in a space on Dekalb Avenue that was once home to a popular place called Gringos. Their lot is quite small, and so guests may end up parking on Elmyra instead, especially if they come during peak times. The brothers are Jonathan and Justin Fox, formerly of Fort Worth, Texas, and they started as a catering business that also served up from the kitchen at Smith’s Olde Bar in Decatur. Within four years, they’ve made themselves very well known as the essential barbecue destination for travelers with time enough to make just a single stop in our city.

If I may break away from the fulsome praise that this good food deserves, I would like to say that I don’t know that this is at all fair to Georgia barbecue, to have its predominant, best example for travelers be something imported from Texas like this, but nevertheless, visitors like the awesomely readable Full Custom Gospel BBQ and the Chicago Tribune’s Kevin Pang and Keith Claxton just singled out Fox Brothers for a breeze through our city, when its Texas style is nothing much like the Memphis-by-way-of-Alabama style that informs the huge majority of our restaurants. It is excellent, but visitors to Atlanta should never think that it is our ambassador; rather, it is a most distinguished guest. The next time any out-of-towner in Atlanta wants to see what Georgia barbecue is like, I would recommend Harold’s, for the history and the stew, or Williamson Brothers, which I personally do not enjoy, for the style that dominates most of our restaurants, or Hudson’s Hickory House for the juicy, drowned-in-thin-red concoction that is very popular in the city’s western suburbs, or Heirloom Market, for the shock of the new and the exciting fusion with Korean sauces.

That said, look, if you’re just in town for a day and want one of the best barbecue meals you’ve ever had and don’t care what it represents, by all means, come and gorge yourself here. It is fantastic food.

There were thirteen of us, and heaven knows what everybody ate; I was not keeping track, although it did seem that many people tried the Carolina-styled pulled pork, which was one of the specials on this afternoon. Among the many things that I love about Fox Brothers is the way they keep their specials exciting and unpredictable. There’s always something neat here. This sandwich, served drowned in mustard sauce, won raves from everybody who tried it. Another special was a green chili, which was so neat and tasty that David waved me over to his side of the table to sample it.

I had a combo plate – look, it was my birthday, and darn right I was going to indulge – of sliced beef brisket and pulled pork. For my sides, I selected a Frito pie, served in the bag with a traditional, bean-free Texas-styled chili, cheese and onions, and the Fox-a-Roni, which is Brunswick stew served over mac and cheese. I don’t know that I’ve ever had so much protein in a single meal before. When we left after a couple of hours, to the delight of the people in line waiting patiently for us to vacate our four tables, Marie and my daughter and I went to the museum, to let our newly mobile baby crawl around the infant play area for a while. I laid down on the floor with him and let all that protein turn me into a thoroughly immobile, exhausted lump. It was awesome, and it all tasted unbelievably good, particularly the brisket. You can get some darn good brisket in town – Bub-Ba-Q smokes some very, very good brisket – but nobody comes close to this. Certainly, the next time that I order a combo plate here, I’ll get vegetables for sides, but I can’t imagine a visit without the brisket.

By my count, Marie and I have written up thirty Atlanta barbecue restaurants for the blog. That’s ten inside the perimeter and twenty outside, and there are certainly more to come. There’s Barbecue Street, Daddy D’z, Spiced Right, Rib Ranch and that damn fool place where all the Gators fans go, for instance. But when it comes to barbecue, absolutely everybody is in the shadow of Fox Brothers, our most distinguished guest. I hope they keep smoking here forever. It makes me want to spend a month on Full Custom Gospel’s turf and see whether anybody else in Texas is as distinguished as this. Anybody want to sponsor a month’s research in Houston and Austin?

Other blog posts about Fox Brothers: