A week ago, I was back in Smyrna while Marie was treated to another baby shower. I was, unfortunately, back in Smyrna a little earlier than I should have been.

Like everybody else in this hobby, I had been reading about Heirloom Market, a teeny place that’s been getting a lot of attention. Last month, for some reason, I found cause to mention that apartment complex right at that terrible intersection of Powers Ferry, Interstate North and Akers Mill right underneath I-285 at the river, which, in the 1970s, was nationally renowned as the center of Hotlanta’s swinger and hedonist community. That complex has cleaned up (literally, one hopes) and now trades as “Walton on the Chattahoochee” and there are probably far fewer gold medallions worn by the current residents. Next door to the complex is a convenience store that has been there forever, and now one-third of that building is home to a really good little barbecue place that everybody’s talking about.

I pulled in right at eleven, which is when I wrongly figured I could get some lunch. Unfortunately for me, this place opens at noon on Saturday, so I left, drove over to say hello to my brother and use the computer for a second before heading back. I returned at 11:40 and a line had already started. There are lots of people curious to try this place! 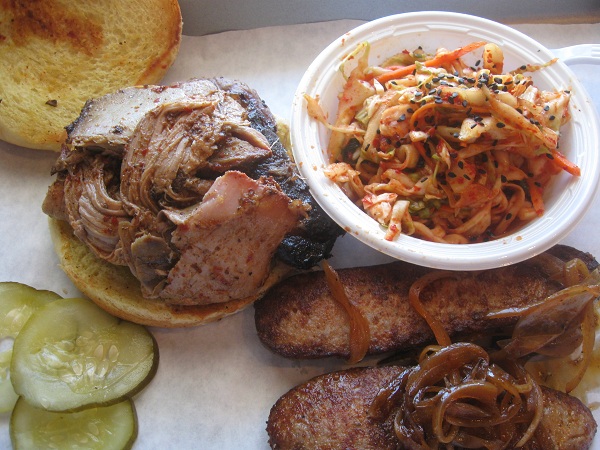 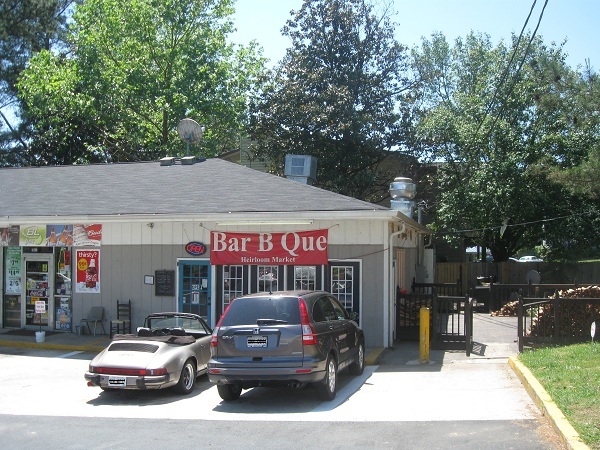 Longtime readers might have noticed that I’m not one for dwelling on the personalities of celebrity chefs and their trendy creations, and Heirloom Market might or might not fit into that bracket, but I was amused to see biographies of the two owners, Cody Taylor and Jiyeon Lee, on the restaurant’s website. I didn’t read them and I’m not certain where they worked previously – I personally could not care less – but those who do follow chefs from business to business seem to want to know.

Taylor and Lee claim to use locally sourced wood for their pit and locally farmed meats for their kitchen and, like The Oink Joint in Zebulon, they offer some Korean influence on the menu for guests interested in trying something a little more esoteric than the traditional fixings of a barbecue joint. These include one of the three sauces that I tried, a mild orange “KB” sauce that was quite sweet and a little spicy, and some of the rotating daily sides. I enjoyed the kimchi cole slaw enormously, and, were I not allergic to them, I might have ordered the tempura sweet potatoes. The girl sitting next to me had those and they looked good.

The other sauces that I tried were a thin, peppery, Carolina-styled vinegar sauce called “Settler” and a Memphis-styled “Table” sauce that was thick, brown and smoky. Neither was really outstanding; to be honest, the pulled pork actually tasted best when I dipped it in the thin, red residue of the kimchi cole slaw. Honestly, if they’d bottle that stuff for the tables, they’d be on to a winner.

That said, the pork was completely wonderful and didn’t need any sauce at all. They pile a good amount of it on the sandwich, and I will certainly agree with Jon Watson and the rest of The Atlanta Journal-Constitution‘s team in calling this some of the best pulled pork in the region. Served on really good, thick bread and containing a good mix of tender meat and bark, It totally lives up to the hype. April was a great month for trying new barbecue for me. This, Bill’s in Hull and Hambones, down in Hapeville, all really surprised me very pleasantly.

The prices here are very reasonable. You can get a sandwich and a side for $6.50, or upgrade to a plate with a larger portion of pork, beef or chicken for about $3.50 more. Alternately, do what I did and instead of a second side, get yourself some sausage to go along with your sandwich. Seven varieties are available; I had a hot Italian link and it was delicious. The KB sauce went really well with it, too.

If there is a downside to Heirloom Market, it’s in the size. There is no outdoor seating – a shame on a day as lovely as last Saturday – and barely room for twelve guests indoors, crowded around one table and along the windows. The service is prompt and the drink selection is really nice. I probably should have just had a glass of water, but I helped myself to a bottle of Boylan’s birch beer. I hope that Taylor and Lee decide to take their apparent success to a larger space soon, because the next time that I should visit by myself, I would like the opportunity to read whatever I’m in the middle of. Crammed in as all the guests were, there simply was not room!

Other blog posts about Heirloom Market: