Hottie Hawg’s is a place that I’ll always associate with my dad, even though he never ate here. On the afternoon after we buried him in January, one of Dad’s good friends told me that he had been enjoying the place and that I should check it out sometime for our blog. He told me it was just off Bolton Road, leading me to wonder aloud what in the heck he was doing in this part of town, but he assured me that the neighborhood has been improving dramatically over the years. Gentrification has been making this area look a lot better since I last drove through six or seven years back, and now it is home to a funky and family-friendly barbecue joint with live music twice a week.

Last Thursday, my mother hosted a baby shower for Marie and, since the original plan was for me to drive my daughter and Marie’s mother down to Smyrna for it – those plans, as all plans might, got a little confused – Mom suggested that I get together with Neal and get something to eat. Actually, she didn’t so much as suggest it as decree it. Anyway, I asked Neal whether a few options in the Smyrna area sounded good, and he picked this place.

On that note, Urbanspoon makes the pretty bold claim that this place is in Smyrna. I would argue that if you’re inside the perimeter, inside the Chattahoochee River even, you’re not in Smyrna, but Atlanta. 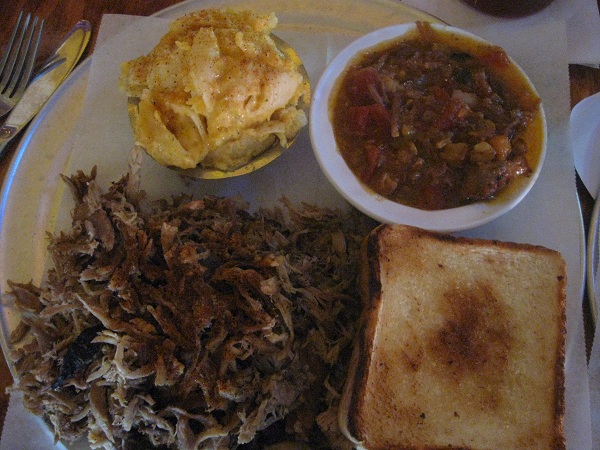 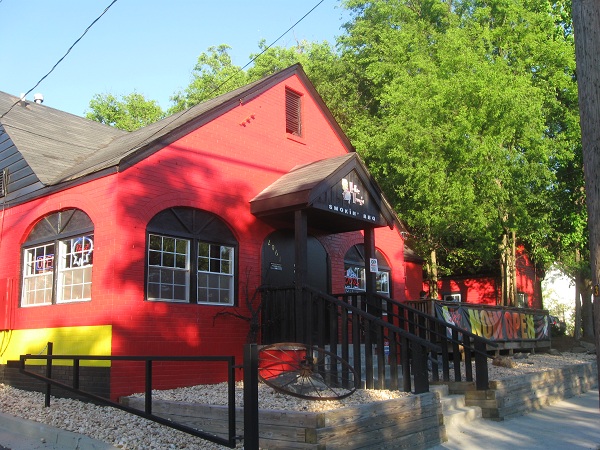 Hottie Hawg’s is a very small chain, with one store in each of three states, Colorado, Florida and Georgia. A fourth store is scheduled to open in Texas later this year. They try to strike the attitude of a dive bar, but also attract families with small kids. The servers all wear black tank tops and teeny denim shorts and I can’t claim to have objected to the nice way they would open the door to the patio, both hands laden with trays, with their boots.

I really overate here, and while I’ve no excuse for it, I really wanted to try the soup of the day as well as two sides. This soup was a cup of smoked corn chowder and jalapenos with andouille sausage and it was incredibly good. It was just a little thinner than I was expecting, but I could have enjoyed a much larger bowl with no real complaints. For his appetizer, Neal had the armadillo eggs. These are huge deep-fried and very spicy peppers stuffed with brisket and were also really good.

The chopped pork plate is enormous and comes with a freaking pile of meat, unsauced but with a sprinkle of spice atop it. There are two sauces, neither made inhouse, but shipped via boxes from some corporate headquarters for guests to take home. The thick brown Memphis-styled sauce was pretty good, but I enjoyed the spicy Mustard more. Coupled with the heat of the armadillo egg that I had, I had to mop the sweat from my brow!

Neal had the baked beans, which he said were pretty good, but not as good as those at Marietta’s Williamson Brothers, which he enjoys more than I do, and the tomato-cucumber-onion salad. I had the stew, known here as Cooter’s Stew, which was the only thing that I didn’t enjoy much, and the mac and cheese, which was just terrific. This, made with no scrimping on the good stuff, was really special, and I will definitely have it again the next time the road brings me back to this place.

We left before the music started, but it got pretty busy before then. The handful of families trickled out and a younger crowd moved in, enjoying bottled beers on the patio on a very nice evening. The restaurant reveals itself as more of a neighborhood bar than a destination for barbecue lovers right now, but there is certainly worse in the city getting more attention from writers. I hope that the word gets out soon; Hottie Hawg’s is definitely worth a visit.