On our most recent trip to Athens, Marie and I split up the eating duties so that we could visit several restaurants and have small meals at each. It’s easier, she put it, on the budget and on the buttons. She enjoyed a very nice lunch at Last Resort while I sipped water and had a couple of nibbles, and then we went up Clayton to Bizarro Wuxtry to visit and pick up a few comics. After a short time, we needed to think about going back to Atlanta and retrieving the children, so we went over to Transmetropolitan for a snack. Of course, a snack at Transmetropolitan is twice the meal at any other place. These slices are huge!

Okay, so “best pizza in Athens” isn’t the sort of claim that has people rushing to your town. Athens is full of pizza, most of it just barely above average, and most of it best when you’re living in the dorm and inviting people around for card games just to get them to chip in towards the pie you want to order, or when you’re giving somebody one of your precious Gumby’s coupons from the box in exchange for one of his slices. (You may have noticed that of all the secret ingredients in the recipe for amazing food, nostalgia is the one that surfaces the most frequently in this blog.) Nevertheless, Transmetropolitan can make the reasonable claim that theirs is the best pizza in town. There are some other very good ones, but I think that I like this best. 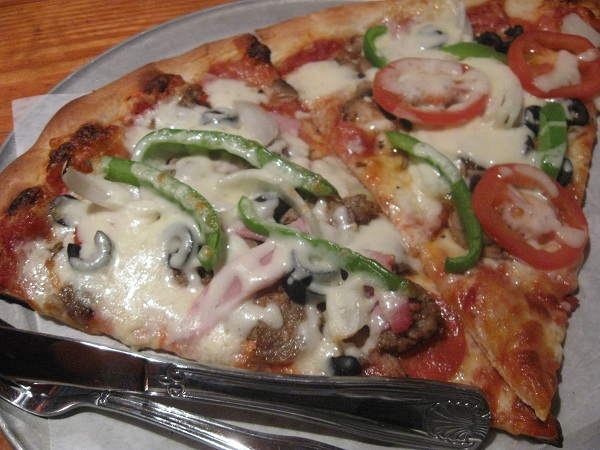 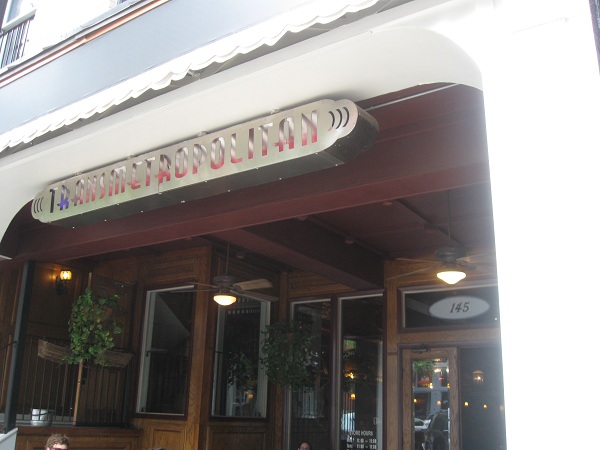 I don’t think that they do quite as good a job actually baking their pizzas here as they should, as I have grown to prefer a crispy, slightly charred underside, but Transmetropolitan wins out over all the other choices in town because their ingredients are just amazing. I had once slice each of their veggie and their darn-near-everything, which is called Hungry Sasquatch. They did seem to put considerably more onions on them than I would have liked, but that’s my preference, and I’d much rather a restaurant put more of something on a pie for me to take off than to scrimp on something. Everything was very good, and the cheese and the sausage were both quite excellent.

Actually, the sausage was more than excellent, it was heavenly. Marie decided to take sausage off her diet last year when we learned that she was pregnant, as she did not like what she had read about nitrates. (It has also, incidentally, meant that her quite remarkable red sausage sauce for pasta is sorely missed. I am planning to bring her a big salami sandwich when she’s in the hospital after delivery, and I plan to take her to Brandi’s for a hot dog afterward, and maybe, once she’s back on her feet, she’ll cook up some of that wonderful sauce with spicy sausage. If I hint strongly enough about it, anyway.) Well, I had some of the sausage on this pie and told her that she was going to need to have a bite of it. She wouldn’t forgive herself if she didn’t. She allowed herself a nibble of about a third of a slice and she might have enjoyed it almost as much as her terrific lunch of ravioli at Last Resort.

Transmetropolitan serves more than just pizza. They do pasta dishes and sandwiches, and have a quite good beer selection. The upstairs bar is usually humming with activity and they have proven popular enough to open a location out on the west side, away from all the downtown pedestrian traffic, which is less of a late-night townie bar and more of an upscalish getaway. I have not been to that one; I like the Clayton Street place just fine, and think that is definitely a place that I’d visit more often if I lived on campus.

We had one last snack to grab before we left town. Since, the day before, I had treated myself to a peach and vanilla malt from Chapman Drugs in Hapeville, I figured Marie was due a dessert from The Grill. We stopped in to get her a chocolate malt to go. When I had been thinking about where we should visit on this trip to Athens, I had thought that some of the Grill’s fries and that wonderful feta dressing would be a lovely thing to snack on in the car on the way home, but we were both almost completely stuffed. But there’s always room for a chocolate malt.

I’ll be back in Athens again once the baby’s born. I’ll have some fries and feta again then.

One thought on “Transmetropolitan, Athens GA”