A month back, Marie wrote up a chapter about our trip to Middlebury, and the details about the lunch that we had there kind of got lost in the nostalgia that she was feeling for her college town, and the great pleasure I was having wandering around and watching her smile. I remember that we left Mr. Up’s having enjoyed the food a good deal, and then forgot about it so thoroughly with everything else going on around that I asked her to do the writeup, since at least she could contribute a couple of college-days anecdotes.

After we finished in Middlebury, we drove back up US-7 to Burlington, stopping at Dakin Farm along the way. Digging into the goodies that Marie bought from this place later proved a pretty solid argument for moving to Vermont. You may not have known before now that there was such a thing as maple baked beans, but you can get them for $4.58 a can when you buy a dozen. You will want to do that.

Anyway, we got back to Burlington and went back up I-89 and crossed Lake Champlain, which is completely gorgeous, and found ourselves in some small farmland in the town of South Hero, where Marie’s college buddy Debbie lives in this really neat old farmhouse. Marie and Debbie had not seen each other in years and had lots of catching up to do. So we visited for an hour and a bit, and the ladies talked about spices and herbs and rubs and sauces and all sorts of cooking things. Marie tried selling Debbie on Penzeys and Debbie tried selling Marie on whatever spice company she likes, and neither were very successful. I figure, you find a spice company that you really like, you stick with it.

There isn’t anything to eat in South Hero outside of Debbie’s kitchen. There may not be anything to eat in Burlington, either, but I’m not sure. Debbie had something special in mind for supper, and it was a good forty minutes south of there. We gassed up before we got back on the interstate, where I confirmed a long-held theory that every convenience store in the state sells Moxie. I may not cotton too much to what damn Yankees think of drinks, but at least they have the sense to stock Moxie in every gas station. Man, I love that stuff.

Since, after dinner, we’d be making our way further south to New Hampshire, we took two cars. Marie rode with Debbie for the forty minute trip and I followed. I’d like to think they talked about old boyfriends and pranks they played on the dean, and that time they interrupted lacrosse practice driving some jalopy across the Middlebury field, but Marie politely insists that she was far too boring in college to get up to those sorts of hijinks, and just spent what little free time and money she had buying old books and fresh pastries from the bakery. She even once let me read her college journal to confirm how boring she was, but all I was able to confirm was that her illegible handwriting was even worse in the early nineties. Debbie politely stayed quiet on the subject of Crazy Marie stories. I’m not sure that’s fair; stories about me being drunk and stupid hang from every tree in Athens.

Anyway, for supper, we had the priciest and nicest meal of the trip. Debbie wanted to take us to The Kitchen Table Bistro in the town of Richmond. This place got a super write-up in The New York Times in December of ’08, and it’s well known in the region for being the best restaurant anywhere around I-89. All of their food comes from local farmers, so their menu changes completely in each season. Their salads are amazing and the ladies shared some pot roast which would knock you over with a feather. About a year later, I was very taken with the pot roast that they serve at the Smith House down here in Dahlonega, but it is a very distant second to how nice this meal was.

I read a review of this place which described the service as, and I love this, “unhurried.” The impression I get is this: if you are driving this far out of the way to have a dinner in a rustic old farmhouse with elegant furniture and nice tablecloths, you are not coming for a meal with the intent of getting on the road to someplace else quickly. No, you’re here for the night. We were seated promptly, and had a lot to talk about, and dishes were brought to us periodically, and we were there for the better part of three hours.

So yes, the bread was wonderful and the pot roast was amazing and the vegetables were fresh and incredibly tasty. The desserts are decadent like you wouldn’t believe, and appropriately portioned, unlike those giant things you pay too much money for and can’t finish like some places here in town.

But the winner? You see that burger in the picture below? That, my friends, that is the best hamburger on the planet. That is the finest burger I have ever eaten, and I say that having eaten an astonishing number of hamburgers in my life and living in a city with more great hamburger joints than anyplace else in America. It’s over, we can all go home and turn off the grills now. The Kitchen Table Bistro has won. Men should weep; I know I did. 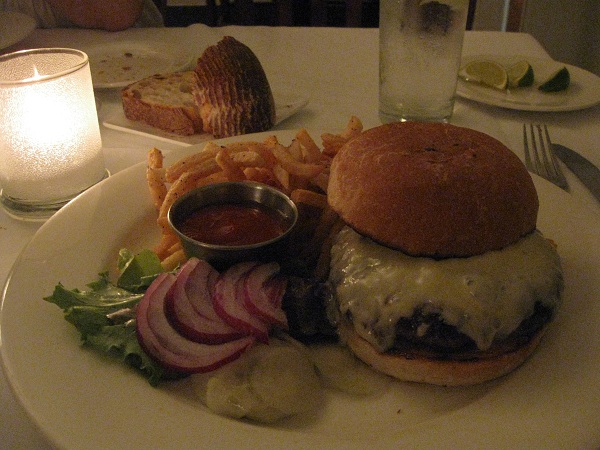 I’ll digress here, for the benefit of Google surfers. I’m done talking about the Kitchen Table Bistro. Ours isn’t a “restaurant review” blog so much as stories about how our fun life intersects with restaurants, and what happened next was even more memorable and fun than the amazing dinner that we had in Richmond.

Marie mentioned in her chapter about Middlebury that she wanted me to tell the tale of that night, so here goes. It was around 10 p.m., a Tuesday, and we were setting out from Richmond in a pretty healthy shower, intending to make Lebanon, New Hampshire within a couple of hours to get some shuteye. What we learned was that while I’m usually good with staying awake until midnight with not much problem, a day as busy as this one wears me out quickly. Vermont itself does not help.

After about 45 minutes of interstate, my brain finally processed what it had not been seeing all along. Well, with the darkness and rain and practically no other drivers, and exits maybe every ten or twelve miles, Central Vermont was reminding me of that Atari 2600 game, Night Driver. Suddenly I realized why: there were no billboards. There is no roadside advertising of any kind in Vermont, nor indeed in New Hampshire and most of Massachusetts. Now, at least in those two states, companies can put their logos on the gas-food-lodging signs, but not in Vermont.

For about fifteen minutes, I thought this was a terrific idea. Vermont is completely gorgeous, and I’m glad the scenery is not spoiled by billboards, like it is down here in the south. But I started getting sleepy, and then I noticed the downside to Vermont’s strategy: my eyes were looking around for ads for motels and I only saw darkness. There is a slight advantage to having all these deeply ugly towns build up along I-75, with hundred-feet-high restaurant signs and light pollution turning the night into the ugliest Christmas tree you ever saw; at least you know there’s a darn Super 8 nearby.

Since you can’t even put a logo on a “lodging” road sign in Vermont, however, it’s a little tough to let drivers know you’re out there. All drivers get in Vermont is a little “bed” icon on a thin blue rectangle beneath the exit sign. (And not the “next exit 1 mile” sign, the “exit now” one.) Well, the next exit was for Northfield, and there was a bed icon, so I pulled off.

At the foot of the exit was a further sign telling us there was lodging five miles to the right, so we went that way. Again, it’s pitch black, no lights, pouring rain, and first we miss a turn where the road we wanted went right and we went straight, and then, once we got turned around, we went down the slope from hell. The sign said it was a 10-degree decline. Oh, the little rental Chevy was going to love climbing back up that.

After about four miles, we saw another little sign saying that some inn or other was a mile and a half on the right, on Prospect Street. This was as we entered the town of Riverton, which was the darkest I have ever seen a town. It is home to Norwich University, which was pitch black, like it had been abandoned long ago. (This much made sense, later. It turns out that is a military college, so of course they observe lights out very strictly.) There were no street lights, just pounding rain, although we did see one black-shirted teenager wandering around, wet, in the dark.

We turned on Prospect, and briefly saw several gorgeous, creepy old houses in the headlights. Then we found the hotel, which was the creepiest, oldest, darkest, spookiest house of them all. Words can’t do this justice. You ever thought horror writers were making up crazy-ass scary hotels miles from any highway? It’s true. I’ve seen this movie, and I know how it ends! I mean, the best we could hope for was the opening scene of Suspiria. Besides which, the Mystery Machine needed our parking place. This was not, to put it more directly, a hotel that looked anything like a desk clerk was still going to be awake for late, unexpected travelers. That it was a pitch black and spooky hotel somewhere in a pitch black and spooky town next to a pitch black and spooky college in a roaring thunderstorm just made it worse.

Debbie had earlier offered us couch space in her farmhouse. We declined because we had a breakfast destination in Manchester, New Hampshire, which is better than three hours’ drive from South Hero. I was starting to regret that decision a little. Next month, I’ll tell you how good the breakfast was, but right then and there, all I wanted to do was sleep somewhere safe, and not go pounding on the door of the dark, spooky hotel.

Thus adrenalized, we got outta town and climbed that 10-degree slope while the car sputtered and spat and hated every inch of it. We got back on the interstate laughing about it and were charged enough to drive for several more miles, before we pulled off at the next exit to ask a gas station clerk where the hell anybody was supposed to sleep in this state and not get done in by an axe murderer, and finally pulled into a Super 8 in White River Junction, just this side of Lebanon, completely exhausted and spent.

I have a lot of sympathy and enthusiasm for the no logo movement, and think that billboard companies are just about the worst things in the universe, and I love how unspoiled and beautiful the land up here is. It was not fun at the time, and that is a really long highway to go without a single chain hotel on it, but we’ve learned a lesson. In the south, we take easy-stop interstate hotels for granted. In New England, you make reservations. We’ll know for next time!

One thought on “The Kitchen Table Bistro, Richmond VT”