I have loved Last Resort Grill for years. Some time before Marie and I started the food blog, I wrote up what would prove to be one of its antecedents on my LiveJournal, back when I was using that service for more than, basically, announcing new entries in my other blogs. In 2007, my little feature Twenty Southeastern Restaurants You Must Try Before You Die – actually only eighteen now, as two of them have closed – proved to be a little popular and got me thinking about expanding my food world. It’s certainly a very dated list; compiled today, I would certainly not include Gold Star Chili or Five Guys or Sticky Fingers. But tastes change. The point is, I have long considered Last Resort to be a destination restaurant, and Marie and I try to visit once a year or so, on those increasingly rare occasions that we’re actually in Athens at the same time.

This past Saturday, because we were splitting meals, Marie and I did indeed visit the Last Resort, but only she got something to eat. I was still quite satisfied with my barbecue and mull at Bill’s, but all things being equal, I suspect that she was considerably more satisfied with her ravioli here.

Last Resort opened in the mid-1990s, in a space that had been vacant for about a decade. I think that sometime in the late 70s and early 1980s, it was a small music club that booked downscaling touring bands, and the restaurant resurrected the old name. Interestingly, shortly before the original club closed, they issued a blanket ban on booking the nascent R.E.M., then notorious for drunken performances and audiences who were just a little too outgoing. When the restaurant opened a decade or so later, that group’s Bill Berry signed on as an investor.

I think that it has brought on different managers twice since it opened, but there’s been a commitment to very high quality food and an awesome wine selection ever since. Last Resort Grill has managed the remarkable feat of being named to Wine Spectator‘s list of outstanding wine restaurants for a solid ten years running, and when you see the wine list, you won’t be surprised. I’m still an incredible novice and learning what I like best in a wine, but I’m impressed by the scale of the list here, which is very heavy on Napa Valley wineries and contains bottles from all price ranges, peaking at $500 bottles of some fifteen year-old Cabernet Sauvignons. Let me get that corporate sponsorship that I’m after and I’ll get back to you on that one. 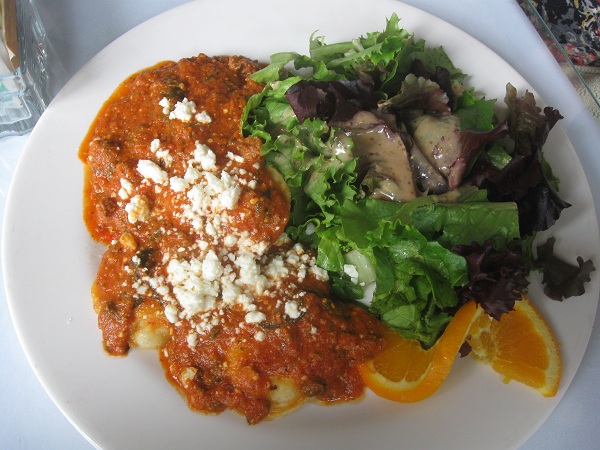 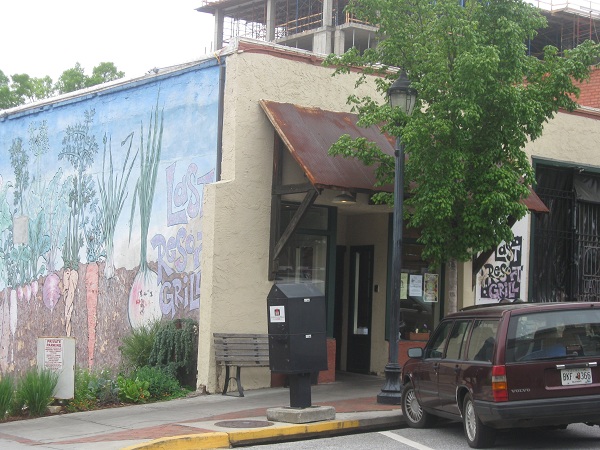 Last Resort has several really good things on the menu, but the specials are invariably worth a listen. Myself, I have always liked the orzo plate, the chicken enchiladas, which are very special, and the salmon bruschetta. In the evenings, they offer a pecan crusted trout which is every bit the equal of Asheville’s Tupelo Honey Cafe (that is, to die for), and a pricy but amazing meal of scallops fried in a “cracked black pepper cornmeal” that I really should try again one day. When I’m actually eating, that is.

Marie had the three-cheese ravioli. They offer different sauces daily, and last Saturday’s was a red pepper marinara with feta, ground beef and spinach. Served with a small salad of mixed greens and balsamic vinaigrette, this was just downright remarkable. She was good enough to share a little with me, so that I could see what was causing her to close her eyes, tilt her head back and smile so.

Well, if you read the previous chapter, you’d know that we did a fair amount of hiking through parks that morning, and she was pretty exhausted before we showed up here. I think Marie kind of deserved such a decadent little treat after such a strenuous day. Yes.

Other blog posts about Last Resort: