I have totally done Bill’s an awful disservice. I ate there once, maybe twice, back in 1993 or 1994, and I decided that I liked other, nearby, places better. It’s about a fifteen or twenty minute drive from Athens, depending whereabouts you are, north of the town of Hull and south of the somewhat larger town of Danielsville. This past Saturday, I decided it was long overdue for a return trip.

Marie and I set out very early that morning and dropped the children off with my mother for what might be our last long day out together before the baby comes. I’m optimistic that we’ll have one last barbecue tour in the northwest corner of the state in a week and a half, but we’ll see. This trip to Athens and the surrounding area really did take a lot out of her, but then again, we also did a heck of a lot of walking. We started the day at Shaking Rock Park in Oglethorpe County, which is one of our favorite places, and then had a small and wonderful snack at the excellent Paul’s BBQ in Lexington before driving up to what I guess is Madison County, and Watson Mill Bridge State Park. It was absolutely gorgeous and quiet here – we seemed to have the park all to ourselves to walk around the river – but she was totally beat when we got back in the car after not even an hour’s hike. We took Georgia-22 up to Comer, and then Georgia-72 west back through Colbert and to the north edge of Athens, and then US-29 up to Bill’s. If there’s a better way to spend about three hours on a nice April day in the area, I can’t think what.

So what happened over time is that I thought this place was sort of okay, and then I started up that old Geocities barbecue place that I used to maintain and kind of dismissed it in too brief a paragraph, and convinced myself, idiotically, that it was less of a treat than it actually was. Over time, I just forgot the actual memory of a pretty good meal and remembered what I had written. When, last year, I took an interest in the wonderful dish that is chicken mull, I learned that Bill’s served it, but didn’t feel like returning to try it out. More fool, me.

Lots of people like Bill’s. Among them, the great artist Jack Davis. If you’re counting, this now makes the third restaurant that we have visited in 2011 with an original Jack Davis caricature of the owners on the wall, plus Bubba Garcia’s on Saint Simons Island, whose mascot is a Davis creation. I figured we’d find another one before long. 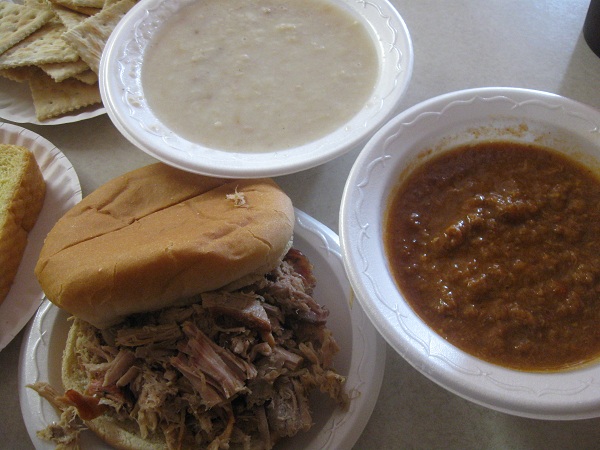 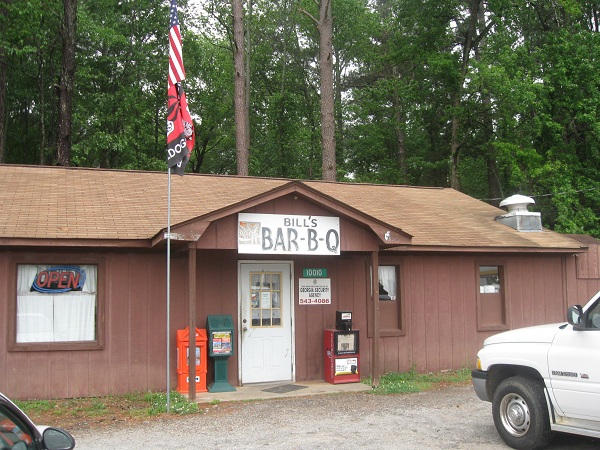 Marie had her own snack waiting down the road in Athens, but here I got to dig in. I ordered a pork sandwich, a small side of hash and a bowl of chicken mull. I think that this might just be the perfect meal in different hands, for the hash didn’t excite me at all. It just tasted a little bland and flavorless, and I didn’t finish it. I’d also have to suggest that in order for a meal at a barbecue place to be perfect in Marie’s eyes, some different sauces would need to be on the table. For my money, they were both pretty good – mild and hot versions of a vinegar sauce that really complemented the moist chopped pork just perfectly – but Marie greatly prefers Memphis-style sauce to Carolina-style, and she wouldn’t have liked this at all.

But while the pork and its sauce were, to me, really super, it was the chicken mull that I enjoyed most of all. Good grief, this was terrific. Really, it’s probably just a melange of chicken, milk, crackers, salt and pepper, but it is just so darn good. Every bowl I’ve had, at the far-too-few places that offer it, is the best bowl I’ve ever had.

Oh, I suppose I could complain about the parking lot – the previous day’s rain had turned it into a mud pit – but that would be churlish. Bill’s is a really great place that I had unfairly dismissed and genuinely deserves another chance from anybody in the region who’s written them off. It’s never too late to learn from your mistake!

I hear that Midway BBQ, near Gaffney, SC, can do me a similarly good meal of pork, mull and hash. Have to get to Gaffney sometime*.

*We visited Midway, which is miles and miles from Gaffney, in January 2012. It was amazing.