Every once in a while, a travel plan comes together quite spectacularly. As I mentioned earlier in the week, Marie and I planned to make the South Carolina trip a little more affordable by cutting off the Rock Hill-Charlotte side of the square, while taking the opportunity to do a little exploring off the interstates. The very best way to get from Spartanburg to Columbia with minimal use of I-26 is by taking US-176 through the Sumter National Forest. This road goes through the town of Union, which appeared to have a couple more interesting places to stop the next time we’re in the area, and it’s right next door to the smaller town of Buffalo, where, seventy-one years ago, Jack O’Dell first started selling beef hash and chopped pork for the Fourth of July.

The teenager got the assistance of some grown-ups in learning how to slaughter a calf and a pig and cook them in a pit dug overnight. He cooked whole-hog style like they do in eastern North Carolina, and he made a tidy profit, enough to realize he could do this regularly, and, in time, he turned this into what might be the state’s oldest continuously-running barbecue restaurant.

He also added chicken mull to the menu, which is what brought me here. Now, mull is what we call it in northeast Georgia, and that’s what I will still do, but in South Carolina, where the dish is better known, it is called chicken stew. I first got a hankering to visit Midway after reading the two simple sentences that John T. Edge afforded the mull in his seminal Garden and Gun article “100 Southern Foods You Absolutely, Positively Must Try Before You Die”. There are some places in and around Athens that serve mull and Brunswick stew together, but the notion of getting eastern NC whole hog-chopped pork, chicken mull and So’ca’lina hash over rice sounded like a to-die-for combination.

And it was. Oh, friends and readers, put this place on your wish list. It is amazing. 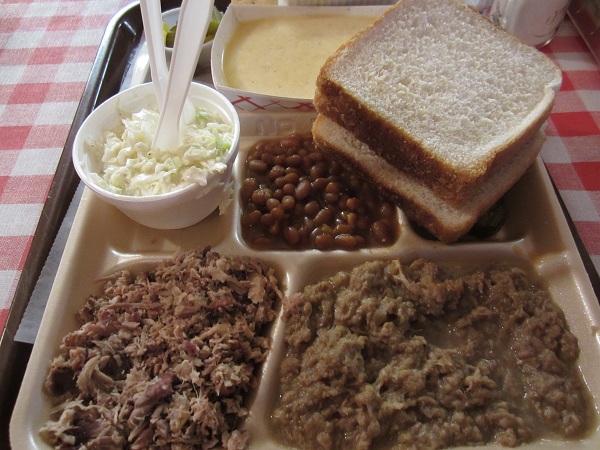 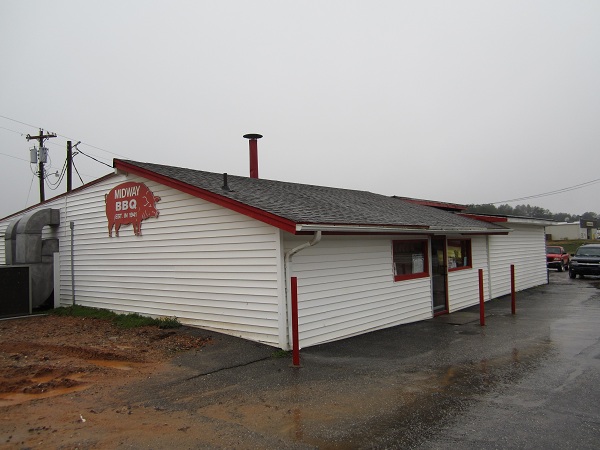 Marie and I split a mixed plate of pork and hash with cole slaw and baked beans for only seven bucks. Unfortunately, the mull is not available as a side order on plates, but then again, the amount that they serve you is just enormous. For another $3.50, you get a big cardboard boatload of mull. It is thinner than any that I’ve had in Georgia, and it is served with a heaping pile of saltines to help thicken it. The key word in Edge’s writeup is “slurping.” You don’t slurp down a bowl of Georgia chicken mull. This, you do. It’s peppery and milky and the chicken is just perfectly stringy. I really could eat this every week.

The hash was quite a surprise. Apparently there are only four ingredients. It is mostly beef, with just a little pork, onions and butter. I won’t claim that it is my favorite, but it certainly had a unique and surprising flavor. The pork, on the other hand, was remarkably good. Dry, it was perfectly smoked and moist. Sauced, it became fantastic. I did not much care for the tomato-based sauce, and the mustard sauce was only pretty good, but the vinegar mixed so wonderfully with this barbecue that it tasted like heaven. Of course, we have barely scratched the surface of barbecue in South Carolina, but this is the place to beat, in my eyes.

I spoke for a few minutes with Jay Allen, who is Jack O’Dell’s son-in-law and manages the place now, while Marie perused the meat counter. I considered the map, and figure that if we make it to Asheville to live, then this place is really only about a thirty-five minute detour on runs between there and Marie’s family on Saint Simons Island, and we’ll probably need to pick up steaks and sausages from somewhere. Might as well get some mull while we’re there. Allen, for a Yellow Jacket, was a heck of a great guy, and actually offered to deliver some to us on his occasional runs back to Atlanta. I smiled and thought about that. In the meantime, I just want the word out: Midway needs to be on everybody’s barbecue to-do list.