When I plotted my circle around South Carolina, it was natural that I’d use I-85 as my entry point, just for the sake of convenience. Continuing northeast up that interstate, my next stop was in Gaffney, the town that has attracted many a tourist’s eye with its gigantic water tower made to look like a peach. I thought about stopping to take some pictures, but it’s not going anywhere, and I had a lot of road to cover. I made my way over to Willard’s Hash, a popular destination in the area since the late 1960s, and was very surprised to see a familiar sign there. Earlier this year, the last time that Marie and I were in the Palmetto State together, we had a terrific meal at the amazing Midway BBQ in Buffalo, thirty-one miles south down SC-18. Here, on the side of the building, was the familiar red pig with the words “Midway at Willard’s.” Oh, man, was I ever ready for this.

Something, however, was not quite right at this outpost. This wasn’t right at all. 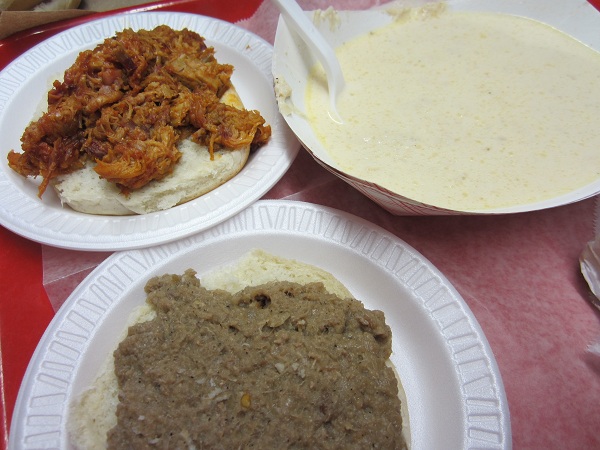 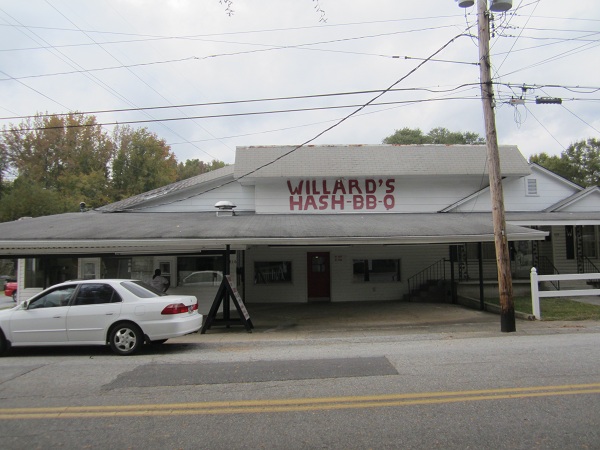 There were three teenagers running things inside. There’s a walk-up window, and lots of space inside. Much of it is only used a few times a year. Rather than being a regular stop, Willard’s has spent the last several decades being a go-to place for big events, like the Fourth of July, when just about the whole community shows up. Photographs on one of the walls tell the story, an amazing record of vast crowds and big haired ladies in their Sunday best. I’m frankly amazed that I had never heard of Willard’s before I started looking for restaurants that might be on the route that I was drawing, as there is such an amazing sense of history here, and, honestly, if you’re at all interested in the history of the region, you certainly need to come see these dozens of photos. It’s like the Upstate’s secret museum. They also reveal that, in the 1970s, there had been a second Willard’s in Spartanburg.

The teens explained that Willard has retired and moved to Illinois, and that Midway is leasing out his space with the agreement that they’ll sort of share the name and keep some of his recipes. This meant, sadly, that I would be denied Midway’s incredible chopped pork, although I would get to dig into some excellent buttery and beefy hash and have another cardboard bowl of Midway’s amazing thin chicken mull. The kids gave me far more crackers than I needed to slurp this down, although I can imagine some folk will use them all.

I was firstly a little disappointed that the kids couldn’t break through the restaurant’s rigid menu to work out a sensibly-priced way to sample all three. A plate here, priced very nicely at $7.50 if I remember correctly, comes with two meats – either barbecue and hash, or a double-order of either, along with two sides. I would have been happy to swap the two sides for some chicken mull, but that can’t be done, and I didn’t wish to either waste food or spend an additional $3.75 for mull. We ran into that problem at the main store in January, but then, Marie and I were sharing a plate. The best compromise here was to order one chopped pork sandwich and one hash sandwich and a bowl of mull for a little under $9; that way I would not be throwing away sides that I couldn’t finish.

But in the end, I still wasted a little food, because this chopped pork is not at all the same as that wonderful barbecue down in Buffalo. The hash tastes similar to what I remember at Midway, and the mull is the same and majestic, but the pork, pre-sauced, lumpy and mushy, was barely edible at all. Even the mighty mull couldn’t salve the disappointment. I’m still very happy that I stopped for the experience and the mull, but it was the trip’s first stumble. More would come.

I enjoyed the chopped pork at Courtney’s BBQ & Seafood a little more, but it was not outstanding by any means. This place in Clover, a suburb of Rock Hill, is a really huge barn of a restaurant. When I arrived about 3 in the afternoon, it was pretty quiet, but the server assured me that this place is a madhouse in the evening. 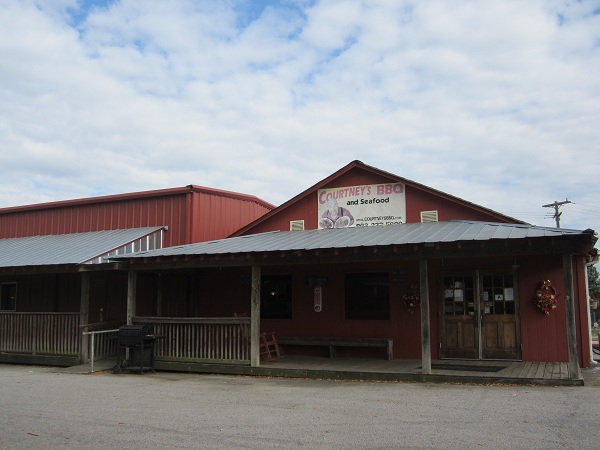 Gene Courtney opened this restaurant in August of 1999. Unlike many of the well-known small joints in the area, it is a true full-service family restaurant, apparently the largest in the region, with a bar and a buffet. They have a big menu of seafood, ribs, burgers, chicken tenders and the like to please everybody.

This was the second place that I visited where the pork just tasted mushy. I’ll come back to this in subsequent chapters, because it was a taste that I kept encountering. Here, they smoke butts for twelve hours over hickory, but I didn’t taste any smoke at all, but lots of mushy moisture. It wasn’t at all bad, and, paired with some awesome red slaw and great, attentive service from a friendly waitress, I enjoyed myself just fine. It was pretty good, and I can see how this place keeps the community coming back every weekend. It’s a good restaurant, just not to my particular taste.

Dear reader, you can start to see how my enthusiasm started to ebb despite little standouts. In the next chapter, we’ll see how my patience got pushed a little farther. Be brave.