So, I’d enjoyed some pretty good barbecue at the last two places, and made my way north for my next stop. My friends at Roadfood.com had suggested that the next place that I needed to visit as I made my way east across the state was 521 BBQ & Grill, just south of the state line in the suburbs of Charlotte, and the best way to get there from Clover was to actually drive across Lake Wylie and get on Charlotte’s perimeter highway, I-485. After I made my way north across the lake, I spotted a strip mall with a Best Buy and gave myself a half-hour break to walk around, get at least a little bit of exercise, and shake my head at the quite ridiculous prices they charge for a USB cord to replace the one that I left at home. I figured it could wait until I got back to Atlanta.

My half-hour break unfortunately then had me getting onto the interstate at four, along with everybody else in the Charlotte suburbs. The sixteen miles between the onramp and the restaurant took forty minutes to drive. So much for the highway making everything quicker! Anyway, the road took me through the nice suburb of Ballantyne before crossing back into South Carolina and the town of Indian Land. Even knowing from what I read beforehand that 521 is in an easy-to-miss strip mall location, and even infuriating the traffic behind me by driving absurdly slowly, looking for addresses, I still almost missed it. I blame that horribly small sign that they bought. 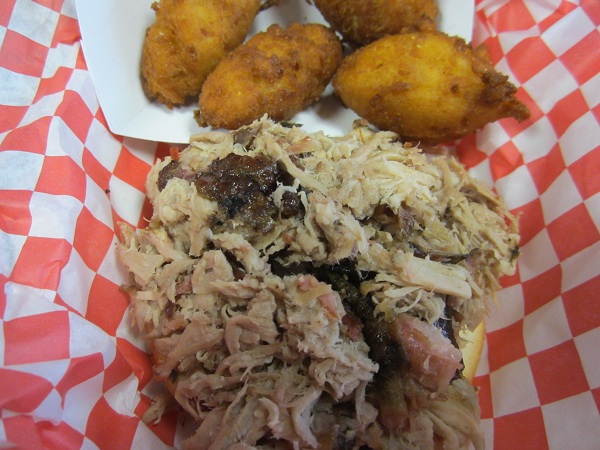 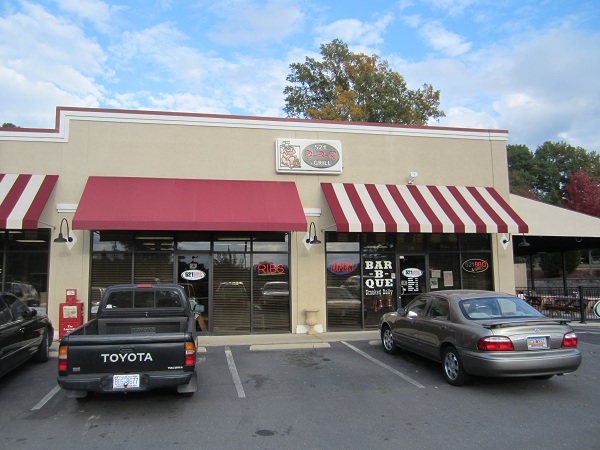 I enjoyed what I got at 521, but I’m also quite confident that the pretty good meal was not this restaurant’s finest hour. Mike Dial opened the business in 2005 after lots of success on the competition circuit, and he has a pretty good following. Quite a few Charlotte-area foodies and traveling barbecue bloggers like me have paid him a visit and left very happy. Dial’s twin secret weapons are an incredibly rich spice rub for the meat as it smokes, and one of the best sauces that I have sampled in quite a while. He offers a thick, sweet brown tomato-based sauce for people who like it that way, but also a remarkably good thin and pink vinegar sauce with lots of pepper flakes floating in it.

Sadly, in my case, I just had the bad luck of getting some meat that didn’t match the quality of the spices. I read that Dial smokes over hickory for fourteen hours, but my sandwich’s meat had the same mushy, limp consistency and character as something that had been waiting over hot water for about as long. I’ll chalk this up to misfortune rather than a genuine fumble; I just didn’t get the punch that writers before me had enjoyed. It was pretty good, but it really didn’t live up to the hype. That’s my loss.

The road wasn’t done with me having mushy pork. I got back on the highway, filled up the gas tank, and was making my way south and then east along SC-9 by 5.15. I started racing the sun; I wanted to get to Bill’s BBQ in Cheraw in time to photograph the building and the sign while there was still light. I made it, and noticed something incredibly odd. Both 521 and Bill’s have the same picture of a cartoon pig kicking back in front of a fire on their sign. The next morning, in Lake City, I saw the same artwork at a barbecue place that I drove past called Ella’s. I wonder how many other barbecue joints employ that clip art?* 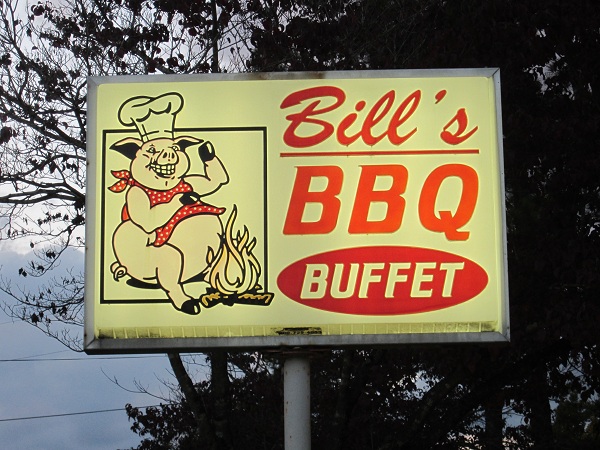 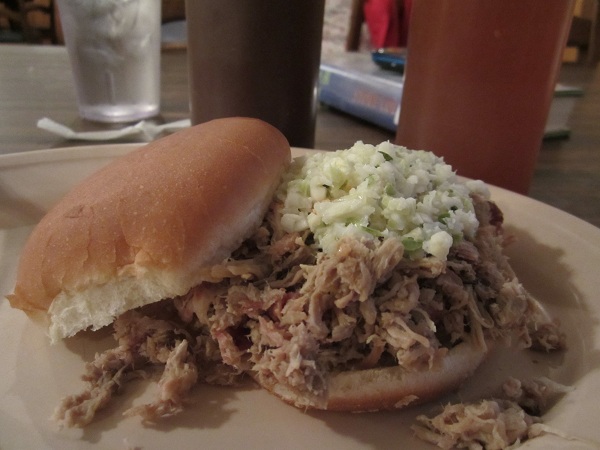 So this was the first stop that I made at one of South Carolina’s barbecue buffets. This one was opened by Bill Hunt in 1985 and, like all but one of the other buffets that I visited, it’s a great big barn of a place with seating for a couple of hundred people. I simply got a sandwich, priced right at $3, and sat down with my book. The place was nearly empty. There was just one other table with two older couples enjoying supper, although another three parties arrived as I was leaving. This was a far cry from 521’s frantic activity and noise.

Again, the sandwich was pretty good, but nothing to shout about either. I’d now hit three meals in a row where the pork just tasted mushy and greasy, and not smoky and firm. I tried just a dab of the tomato-vinegar sauce, which is similar to the regional style of northeast Georgia, and a dab of the white cider vinegar sauce, but the meat was already so moist that it couldn’t stand much sauce.

I left quite discouraged. Neither meal was in any way bad, but I’d come an awfully long way for average, pretty good food. Things would get exponentially, astronomically better, but not before getting worse.

I don’t suppose this matters to anybody but me, but Urbanspoon considers the South Carolina towns of Fort Mill and Indian Land to be part of the Charlotte metro, and not part of Rock Hill, SC, which the map suggests to me would be more sensible. Since I don’t live there, I don’t have an iron in that fire and I guess it’s set up the way that the locals like it, but it certainly looks strange from here.

*11/16/12: I was not looking (honest!), but I found another one, Heavenly Hog in the eastern Tennessee town of Clinton. That makes at least four**.

Other blog posts about 521: