So, here’s the situation: the sun had gone down, I was in very unfamiliar territory, my last four stops had been okay, and I was missing my family a bit. Nevertheless, I pressed on. I would be driving through the small city of Florence after dark, bound for one last meal in the town of Scranton before stopping for the night in Lake City.

While on the road through Florence, I passed a Maryland Fried Chicken. Shut my mouth. It turns out there are twelve locations in various parts of Georgia, so this isn’t some strange and exotic weird thing, but I’d only heard of this old fast food chain in passing. I love old fast food chains with vintage signs and decorations. I should have stopped, I told myself, but then I assured myself that no, I should stick to the schedule, because I knew there was good barbecue down the road, and it would be awful to drop something that I’d been looking forward to for something unplanned. Well, all right, you boring, unadventurous old man, I told that part of my brain, you win this time. But tomorrow, if I see something weird and fun and neat, we stop the car.

Foreshadowing: this plan won’t be a winner.

Well, my boring, grouchy self got stopped in Scranton at Schoolhouse Bar-B-Que, another big buffet restaurant. It opened in 1994, but the building is a surprising treat. It is indeed an old schoolhouse, a relic of the 1930s built with WPA money. The school was decommissioned in the ’60s and was later used for decades as a warehouse for a nearby business. 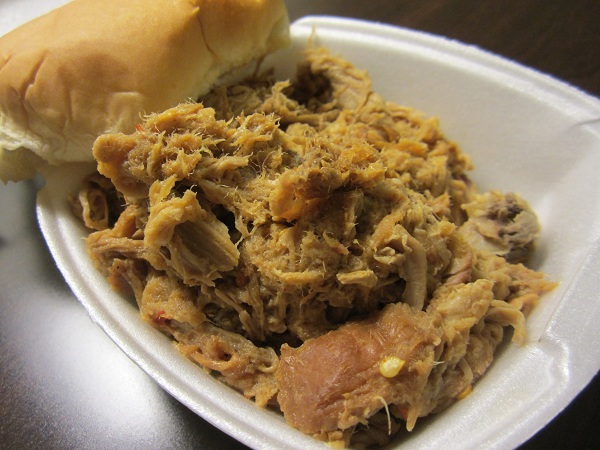 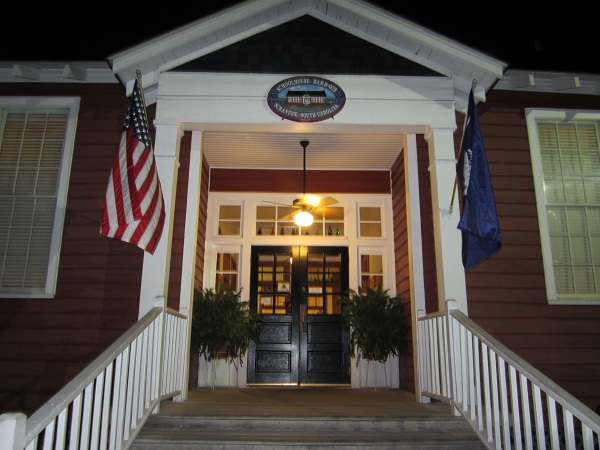 The building was the only thing of note about this meal. As mentioned in chapter one, there were some calamitous disappointments on this trip, and let’s leave it at that. The second calamitous disappointment came when I stopped for the night in Lake City. I had no choice but to overpay for my motel, and let me tell you, that astonishingly generous three percent discount for AAA members really made my annual dues feel worth it. So, thanks for nothin’, Days Inn in Lake City.

So, yes, I was a little grouchy when I went to sleep. But the next morning, oh, did that ever make everything better.

I woke to see what the South Carolina Lowcountry looked like. It was refreshing and wonderful. I’d never been here before, and it was delightfully strange, having left Atlanta with all its yellow and orange leaves to find everything still vibrant green, and black. I drove south out of town, down an old country lane called Roper Woods Road. For about ten miles, I didn’t see a soul, just swamps and cotton patches, the sun reflecting off the swamp water and dazzling the trees with shadows and sparkling light. It was incredibly beautiful.

Indulge me for a moment, please.

I don’t actually believe in Bigfoot or skunk apes, much as it would be nice to. Every once in a great while, though, when I’m driving through land as quiet and distant as this, I start to understand how those legends got started. Some weird trick of the light or some weird shadow makes you see something that wasn’t there. Something dark catches your eye, and you don’t know what it was. That’s why people fill in the cracks with a sasquatch or something.

About twenty seconds after concluding that thought, I very nearly collided with a flock of wild turkeys, their ugly black bodies jumping across the old country road from one cotton patch to another. All I saw was some instantly surprising dark shapes ungainly lunging in a weird arc in front of me. Somehow, I avoided flipping the little car or killing myself or any of these big, ugly birds. And that’s probably another reason why people make up Bigfoot stories, because who’d want to admit that they got spooked by a dumb ol’ turkey?

Anyway, about half an hour outside Lake City, I pulled up in front of Scott’s BBQ at 9.30 – happily, they begin serving lunch this early – in a completely terrific mood. An invigorating drive through such beautiful forest was precisely what I needed. But even if I had still been as grouchy and cantankerous as I had been twelve hours before, this meal would have cheered me up. This meal was utterly and completely hotdanged amazing. 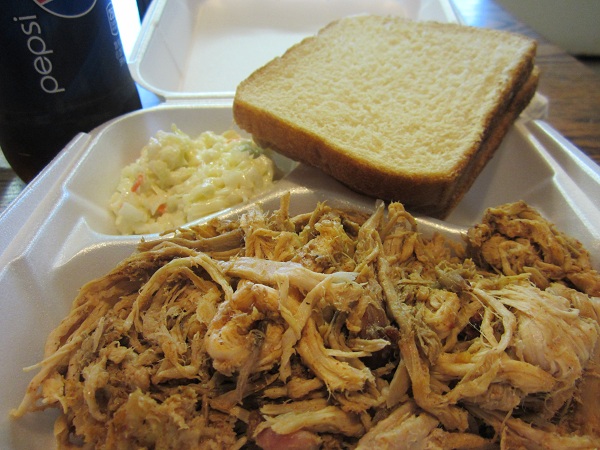 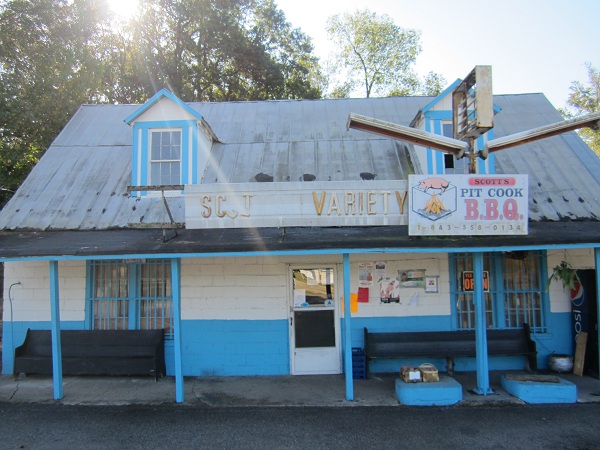 Some friends at Roadfood.com had recommended this place, and a quick Google brought me to this New York Times article by John T. Edge, the professor emeritus of eatin’ real good at Ole Miss. Edge’s praise goes a very long way with me, so this stop came with high expectations. It exceeded them.

This is an old variety store, which still sells a few canned goods, along with hogs, in whole or part. You can take a hog home and attempt to smoke it yourself for $425. In 1972 Roosevelt Scott started selling some barbecue, and the word eventually got around that nobody in the Pee Dee region did it as well as he. Rodney Scott is the pitmaster now, and he smokes for about twelve hours over whatever wood is available, be it hickory or oak, feeling that the wood isn’t the issue. It’s the spice rub and how the meat is handled afterward. Now, the overwhelming impression I got over five of the six barbecue joints that I visited on the first day can be summed in one word: mushy. That was not the case here at all. This is the proper, smoky, tender, firm-tasting pork that I love most.

There was no sauce on the table, and I decided that none was needed. Two bites of this and I began to fear what might happen if the sauce wasn’t up to par. I had slowly finished about a third of my meal, doubting that I would ever want to leave, when the incredibly nice woman who took my order came to me with apologies, that she forgot my sauce. I told her that I wasn’t sure that meat this perfect needed any. She told me to be careful with it, because it’s pretty spicy. And now we know how we improve upon perfection. It is a thin, dark, vinegar-pepper sauce, similar to Zeb’s in Danielsville, Georgia. It set my mouth on fire and it has never been so happy. Thirty minutes later, I still tasted it. I had a bottle of Pepsi and didn’t dare take a sip.

On the second day of February’s circumnavigation of Alabama, I began the journey back to Atlanta with a stop at Mobile’s Brick Pit, and glumly concluded that I might as well head on home, because I wasn’t going to have a meal that good again before I got back. Same dang thing happened in South Carolina. There were a couple of very good stops to come, as well as a couple of flops, but Scott’s serves a meal almost untouchably perfect in every way. I realize that Hemingway is just about the living definition of the middle of nowhere, but if you ever have business within a hundred miles of the place – Myrtle Beach, Florence, Orangeburg – then this is an experience you need.

We’ll crash back down to earth in the next chapter, but let’s leave it in a very, very good place for now.