Earlier this year, I took a two-day “circumnavigation” of Alabama, just driving around the state in a big circle and eating a spectacular amount of barbecue. The resulting series of chapters here at our blog, which you can begin reading here, have proven to be among the most popular things that we’ve written in two and a half years. I’ve been planning a follow-up ever since.

The real world, our general dislike of doing much of anything in the height of summer, and some aggravating car woes got in the way. While we still have two cars, one has been downgraded to intown only service until we get an expensive repair done. The other car is a zippy new Mazda that gets terrific gas mileage. That is the road trip car, and, over two days this month, I took it on a two-day circle around much of South Carolina. We’ve mentioned in previous posts that neither of us are very familiar with the Palmetto State, and, until my two-day summer trip to Clemson, it’s always been a state that we’ve driven through without staying long. We have heard the dismissive generalizations about South Carolina barbecue, and, after two days in the state visiting twelve restaurants, I feel good about addressing a few of them.

First, mustard-based sauces are much more common in the Upstate and in the upper Piedmont than they are statewide. I found plenty of tomato-based sauces, and, especially both in the lower half of the state and the places nearer to Charlotte, lots more vinegar-based sauce than mustard-based. Of course, as many businesses choose to appeal to as many palates as possible, many will offer a good variety anyway. Some of the smaller, family-run joints will still offer just one.

Second, South Carolinians love barbecue buffets. I’d only come across one, Mutt’s in Greer, before this trip, but this time out, I visited five and just ordered a sandwich each time. It simply wasn’t in the budget to spend ten or eleven dollars at that many places, especially since the goal was to buzz through, sample tastes, visit a little bit and get back out on the road. Additionally, I have a natural aversion to buffets of any kind. The faithful will just have to accept my bias; nobody ever demanded that I be neutral and fair to everybody. One of them was quite notably good, actually. We are tentatively planning a trip to Columbia early next year, to take our baby to the EdVenture Children’s Museum, and we will go for the full barbecue buffet experience at a restaurant that I skipped this time out.

Finally, on the one hand, this trip was absolutely worth it for my visit to the legendary Lowcountry dive Scott’s, which more than exceeded my expectations and, as you’ll see in a later chapter, blew my tiny Georgia mind. On the other hand, the overall batting average of South Carolina ‘cue was, without question, lower than any twelve random joints in Georgia or Alabama. We never set out to trash restaurants, and shy away from negative reviews, so just note here as we get started that three of these twelve places were just downright awful, and that discussion of them in this narrative will be brief and cursory. We’ll leave the long, lingering, visceral takedowns of awful restaurants to those critics who’ve been paying for meals at that Guy Fieri tourist trap in Times Square. Anyway, I count one as transcendent, three as very good, four as so-so, and three as hideous. I also stopped at four other businesses, and met a lot of really nice people.

One of those nice people was Barry Deavers, who opened Pendleton’s Smoking Pig in 2008 with his wife Kendra. And this was one of the meals that I’d put in my “very good” category. It really started my day off right. I only got to speak with Barry for a few seconds, because he got really busy really quickly. Like many barbecue joints in the Palmetto State, Smoking Pig is only open on Thursday, Friday, and Saturday. Thursday morning comes with a crush of catering orders and a mob that forms within seconds of the doors opening, leaving the large staff overwhelmed almost instantly. 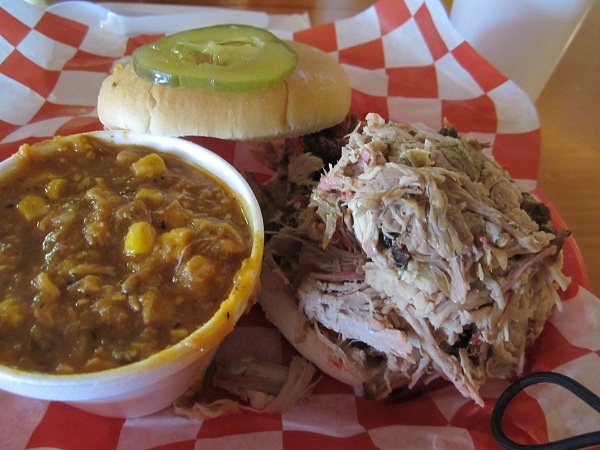 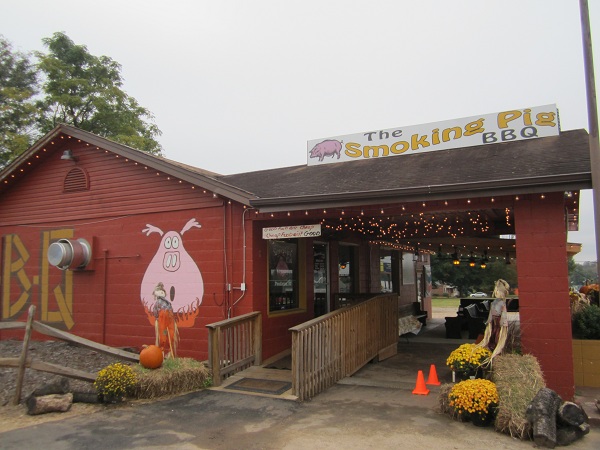 Another generalization about South Carolina barbecue is that guests can expect to find hash over rice here, rather than Brunswick stew. Smoking Pig, however, does serve a pretty good stew, red-orange in color, instead of hash. I was a little discouraged by the potatoes in the cup, as I think these are just a cheap way of making stock last longer, but that was the only disappointment I had with this fine place. The stew is really good despite the potatoes, and the chopped pork is just fantastic. It’s really flavorful and smokey.

I ordered a sandwich plate, getting the chopped pork and the stew for $6.75. The meat didn’t need any sauce to shine, but they do have four available. There’s a mustard, a red vinegar, a brown sweet, and a red-brown hot sauce that I enjoyed the most.

There were people waiting for tables before I finished, so I made my way and got back on I-85. The trip was off to a great start. I had intended to make a stop at a popular restaurant in Greenville called Smoke on the Water. I knew that this was a slightly pricier restaurant than many that I would visit, and budgeted accordingly. However, I couldn’t find street parking and wasn’t willing to pay five bucks at a pay lot, so I chalked it up to experience. As it would turn out, I would end up spending twice as much on my motel room as I’d planned, so I appreciated the extra twenty in my wallet. I slowly made my way through downtown Greenville during the lunch rush, and really enjoyed seeing all the people and all the active businesses. Greenville has never failed to impress me. It’s an underappreciated city with a thriving, vibrant downtown.

A few miles from downtown, I made my way to Tanner’s Big Orange. My friend Devlin had recommended that I swing by for a chili dog, although I had heard of the place before. Its silly old sign is among the dozens featured on one of my favorite travel sites, Roadside Architecture. 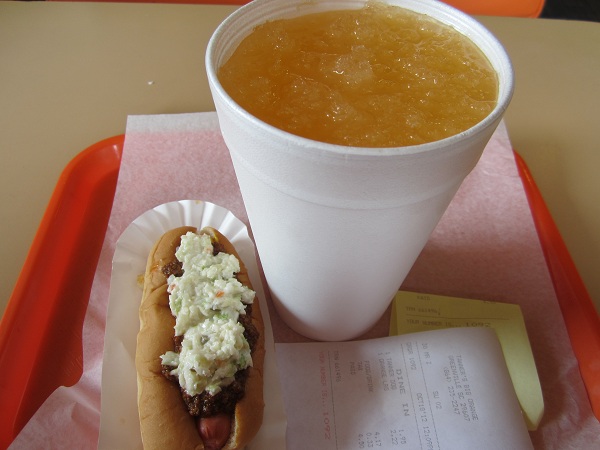 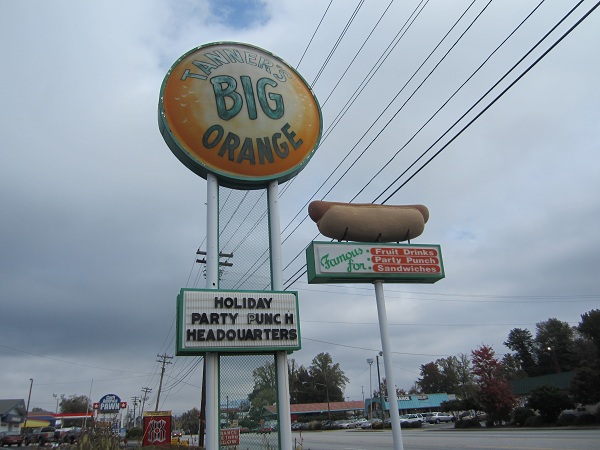 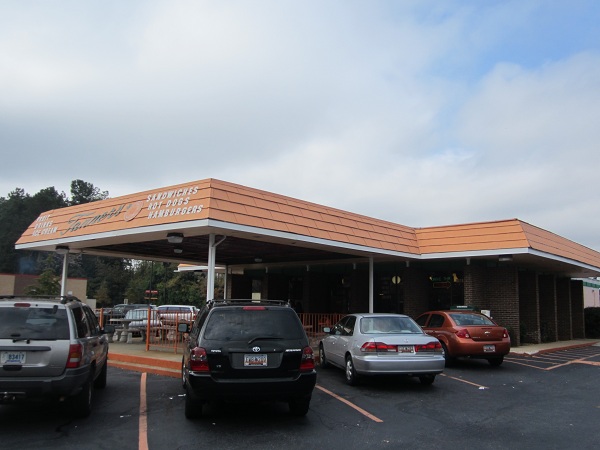 Tanner’s opened in 1943 and while the building has been refurbished inside, lots of the original signage remains. This place is awfully pleased to let you know about its new-fangled drive-through window, in other words! I’m afraid it had picked up an unfortunate reputation for its downtrodden interior, but it is quite nice and clean today, and the food is just fine.

They use Carolina Pride dogs here, and dress both dogs and burgers “Tanner-style,” with mustard, chili and slaw. It’s a perfectly tasty dog, and I really liked the chili a lot. It’s just a little spicy, and really juicy, not at all dry like lots of hot dog chili. But even better than the hot dog was the drink. Sure, they serve Pepsi like most businesses in the Carolinas, but Tanner’s makes a huge line of house drinks, including fruit punch, pineapple, and their signature orange. This is really amazingly tasty! I was drinking water almost everywhere I stopped on the trip, but I was glad to enjoy this. The large bucket was ridiculously filling, and I was sipping on it for several hours.

The trip was off to a really great start. I’m afraid that subsequent stops would be a little less thrilling, each meal on the first day a little less satisfying than the previous one, but as I made my way around one of Greenville’s odd perimeter highways back to I-85 and headed north, I was very optimistic about what would come next.