I never realized how difficult it would be to find new barbecue in South Carolina’s Upstate! On Friday evening, I told the girl at the register at Brioso in Clemson that I would be going to Greenville the next day. She told me that she had gone to school at Furman, and I asked her whether she could recommend a place to get some barbecue. She said that she always went to Henry’s Smokehouse, which Marie and I had visited in February. Since I knew that one, could she recommend another? She thought for a moment and shook her head. She honestly couldn’t think of another barbecue place besides Henry’s.

So, Saturday morning, I was talking with George, the owner of Clock Drive-In, who was checking in his order from the Sara Lee delivery guy. I told him that I had seen his restaurant when I had visited in February and we had lunch at Henry’s Smokehouse. I said that I’d like to get some more barbecue on this visit, and asked where would he recommend. George and the delivery guy were utterly baffled. “Well, if you want barbecue, you want Henry’s,” George said. I agreed that it was good, but that I’d like something different. Surely the delivery guy knew lots of other barbecue shacks? He didn’t. “Oh, well, I guess there’s Mutt’s, but that’s in Greer,” he said. “I was thinking about heading to Greer,” I lied. “What’s that, about nine miles up the road?” This just did not make any sense to the guy. Why on earth would anybody want to drive that far out of the way when there’s a perfectly good Henry’s just south on the other side of Bob Jones.

So the good fellow told me to go north on 29 about five or six miles – it was nearer ten – and turn right on Highway 14 and it would eventually be on the right. I had my lunch, got on the road, and smiled at the Sub Station II restaurant that I passed along the way. One of these days, I’m really going to have to tell you good readers about the time I stopped by the long-closed and demolished Sub Station II in Smyrna’s Belmont Hills. I don’t think their corporate office wants that story told.

Eventually, I found Mutt’s in a big faux log cabin along a sleepy part of SC-14. Randy Jones opened the business in 1998, and this is the original location. For a business that nobody I spoke with really knew, he’s doing well enough to have opened a second location down the road in Easley, and he draws in a big crowd for a huge buffet lunch. I shied away from that and just settled in for a sandwich and an order of hash and rice. 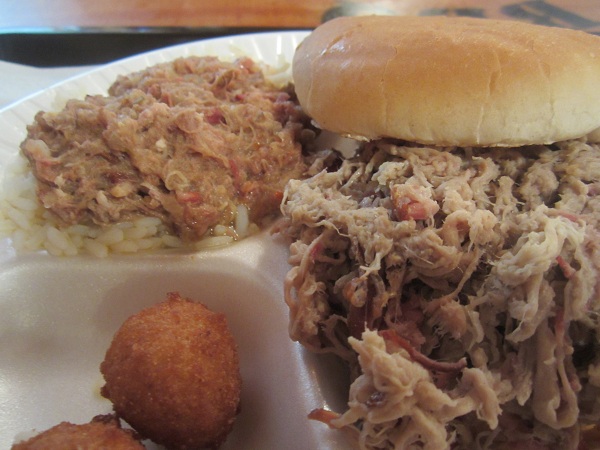 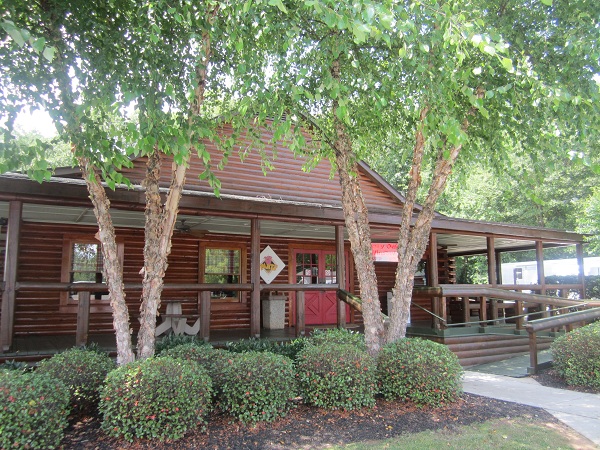 The interior is done up in a silly train motif. This includes lots of old maps from freight companies and advertisements from the 1940s and 1950s, when passenger service was still common. There’s lots to look at here, but with the food ready almost instantly, nobody will be twiddling their thumbs impatient for something on the wall to occupy their time, either. The pork comes from Boston butts, which are smoked for ten hours over hickory, and honestly it is not at all bad. The list of sides, for anybody in South Carolina who doesn’t actually want to try hash and rice, is as long as your arm.

I’m interested in how suddenly and radically the sauce divide seems to hit right at the state line. I learned to love barbecue when I lived in Athens and traveled around to all the small towns forty or fifty miles away in northeast Georgia. On Friday, I had visited Holcomb’s in Greensboro, Bar-H in Royston and Bar-B-Q Shack in Toccoa, and all three have a house sauce that I would expect: a thin, deep red mix of vinegar, tomatoes and pepper. This is the regional style, common to dozens of barbecue restaurants, but today we’re in a different region. On the table, Mutt’s offers a mustard sauce along with hot and mild versions of a thicker, browner sauce, with more tomato than vinegar. They have two additional sauces for people wanting a taste of their own homes: a North Carolina vinegar sauce and a Memphis-style sweet and smoky sauce, but the expectation is that most guests are probably going to want either mustard or tomato sauce with their pork. Either work just fine; Jones has clearly experimented a lot to get the balance right, and while I’m a million miles and a hundred years from thinking myself an expert in Upstate barbecue, I’d call this reasonably comparable to Henry’s, and a meal that the locals should know about.

I’d still rather pay for a small meal – a sandwich with a side comes to $6.50 – than try the buffet, but I just don’t care for buffets myself. Your mileage may vary.

So at this point in the trip, I was left to consider going a little further north, to Spartanburg, or finding I-85 and heading home. Actually, it was my darn road trip, and I had the following day off anyway, so I could go much further north if I wanted. However, while part of me did want to try and find a drive-in called Sugar and Spice that Marie and I had seen on our last trip through Spartanburg, I figured that I had a day of absurd indulgence under my belt already and I should start heading back. I decided to detour through Anderson and see that town. I knew that there’s an astonishingly huge flea market and junk sale called the Jockey Lot, and once upon a time, I would have stopped, but our house needs no new tat and no new clutter. I spotted a small barbecue shack across from the Jockey Lot and sailed right on by, madly, quite full from my two meals at lunch.

What I did next will shock you. On the other side of Anderson, I stopped at a Long John Silver’s / A & W.

See, many months ago, I mentioned on Facebook linking to some article about regional foods and being curious about Wisconsin cheese curds. I wondered whether anyplace around Atlanta sold these, and my friend Devlin said that the A & W chain did. These seem to have packed up and left the Atlanta market, or maybe there’s still one sharing space with another Yum! Brand, KFC, on Windward in Alpharetta, but I can’t say that I care overmuch. However, I was reminded of this because, after our last trip through town, Devlin had said that I should let him know the next time I was going to be eating in Clemson or Anderson, as he had some suggestions for me. I didn’t do this, as I had been feeling hugely antisocial on Friday, but Devlin was on my mind, because I was saying “You know, here you are in Anderson, and you should have given Devlin a ring…” and that reminded me of the fried cheese curds at A & W when I saw the sign. 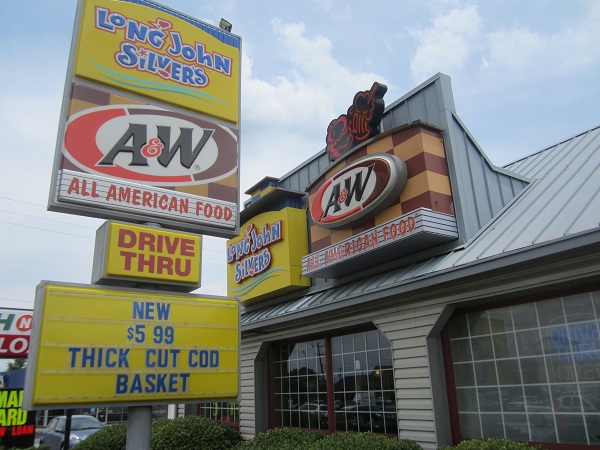 Oh, look, a nice photo of what one of these restaurants looks like in 2012. Y’all save this to your hard drives and marvel at it in thirty years.

In fact, I’d venture to speculate that these things bear as much resemblance to actual Wisconsin cheese curds as the flat, sour swamp water that came out of that draft tap has in common with actual root beer. I poured that out in favor of some sweet tea, tossed out the salty “cheese” in favor of nothing, and continued to the interstate. On the way, I passed a Papas & Beer, a Jack in the Box, and a Cook Out. We don’t have any of these around Atlanta, and I should have stopped at any of these if I was that insistent on having something I couldn’t get in this city, on account of me actually liking these restaurants. Bah!