Hello, my name is Grant, and I’m addicted to Urbanspoon.

See, I had this bright idea when I set out on this road trip. After the first three stops, I would just end up where the road took me. I would not plan ahead, and I would not look at Google Maps or my Urbanspoon wish list. I would just end up in Clemson, ask how to get to Greenville, drive around, stop at whatever looked interesting, maybe mosey up to Spartanburg, possibly detour through Anderson, and come home. I’d take pictures of neat signs or bridges, I would pull into any bookstores that caught my eye, and I wouldn’t be enslaved to a schedule or a timetable. And pigs would fly.

I had trouble sleeping in the motel in Clemson. When I woke, I wondered what I might find in Greenville. I remembered that when Marie and I were driving through in February, we passed by a fantastic old drive-in called Clock on the north side of Bob Jones University. What was the name of the road? Wade Hampton? I bet I could find that. What highway am I on? US-123? I bet I can get from here to Wade Hampton easy. Let me look that up on Google Maps. But lemme check Urbanspoon first, make sure I’ve got the address right.

Maybe next time I should leave the laptop at home.

Anyway, I left around ten and made my way north. In Easley, I stopped first to take advantage of some very inexpensive gas. $2.96 was the lowest I’d seen it in what seems like nearly a year. Before the trip was out, I saw it even cheaper – $2.85 in Greer if you bought a car wash. I also stopped when I saw this amazing old restaurant called Pete’s No. 6. I would have eaten here, but they were still serving breakfast only, and I had a bowl of cereal and a glass of orange juice in the hotel lobby, which is all the breakfast I need. 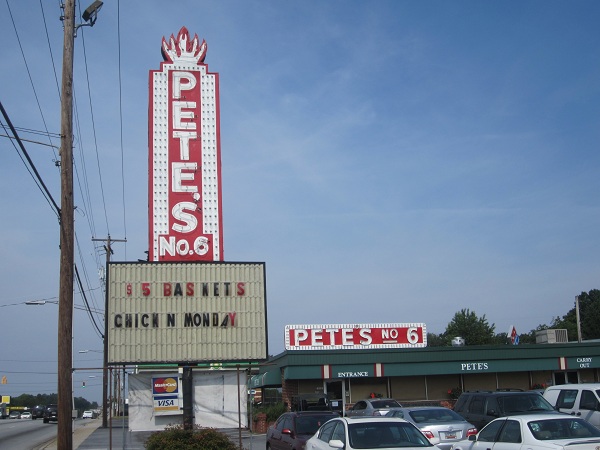 While in Easley, I also passed by one of the other Clock restaurants in the region. In the 1950s, the first of what would apparently be a total of seven opened. The original is on US-25, White Horse Road, but the one I was bound for was apparently the third, and which opened on June 7 1953. It’s possible that all seven are still in business; they are all independently owned these days, and none of them have any social media or internet presence, and they’re all listed on Urbanspoon with moderately different names. Perhaps one day, I’ll spend sunup to sundown visiting each one of them, getting their facts and stories straight, and laying it all out in one comprehensive place. I’m confident that posterity will thank me so very much for the effort.

I spoke with this location’s owner, George Dadeckas. His guests all know him by name; there are far too many of them for him to reciprocate. I asked George if he was affiliated with or owned the other Clocks in town. He smiled a very brief smile and almost shyly shook his head no. “One’s all I can handle!” he insisted. 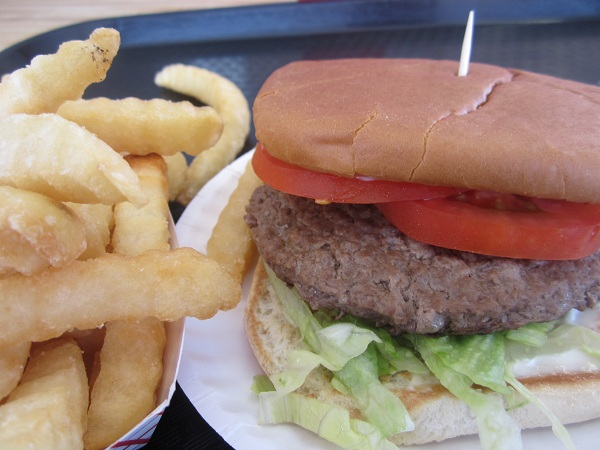 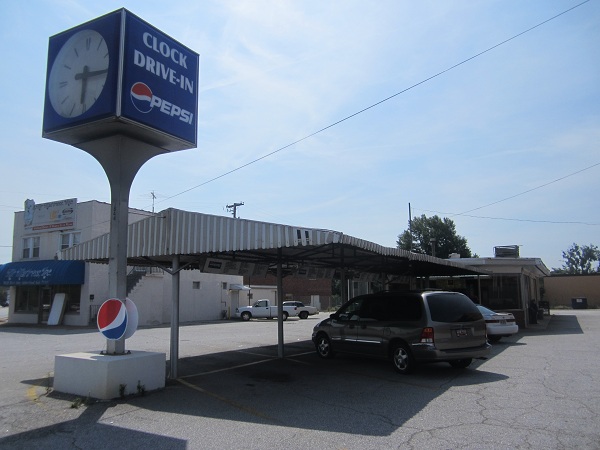 Once upon a time, this Clock was a proper drive-in with car hops. These days, guests need to come inside to order. There are a few seats, but many people only use them long enough to wait for their food to be prepared before taking their meals back to their cars. He had seven other parties come in during the first half-hour he was open. I’m forty and I was almost certainly the youngest. I asked a couple of the tables who came in after me, after they’d greeted George with a roar and placed their orders, whether they’d been coming here for long. “Ages,” one couple told me. “Since I was a kid,” said another man, with his wife adding, “and he’s been bringing me here with him since 1988.”

I really love seeing such loyalty over what’s really a basic fast food style burger. Up the road in Spartanburg, you see it with the Beacon. In Atlanta, you see it with the Varsity. Down in Thomasville, there’s the same community love for Henderson’s. Maybe students at Bob Jones next door trickle in after noon, or fill the place during the weekdays, setting up the next generation’s nostalgia for these places. I’ve since learned that I ordered “wrong.” I had a burger, fries and a Pepsi for $6.50 (cash only), with my sandwich “LMT” style. George asked me whether I wanted mine “LMT,” and I told him absolutely. Knowing that I’d never been there before, he quietly clarified “That means lettuce, mayo, tomato.” I said that was fine. But what you should order at this Clock on your first visit is whatever sandwich you want drowned in chili, and served LMT as a half-and-half plate. That way you get fries and onion rings split and a side cup of slaw.

Maybe some other time. I had indulged quite a lot the day before, and still had much eating to do today. But at least, from here, the computer was safely stowed in the trunk, and I hadn’t any smartphone gadgets to cheat. The road would take me where people and where signs directed me.