This is Marie, contributing an article about ice cream. Because of an unfortunate scheduling snafu, the baby and I went to visit my folks without Grant or the girlchild, so they got no time at the beach. Well, I didn’t either, but the more important part of the visit was grandparent fun time with baby. One of the activities for that was a trip to the opening day of the first phase of the Savannah Children’s Museum. They are associated with the Savannah Railroad Musum and the children’s area is among some of the historic buildings so the place has a lot of character and considerable charm. They’re going to have problems with the grass being trampled by babies pretty soon, and the toys are so portable my son tried to escape with a Lincoln Log and I had to go back to return it.

After a fun afternoon exploring the Children’s Museum, we went to Leopold’s. I could technically have eaten just ice cream for lunch, but knew there had to be some nutritional value in the meal. Also, my dad might have taken unkindly to the idea of a 100% sugar lunch. 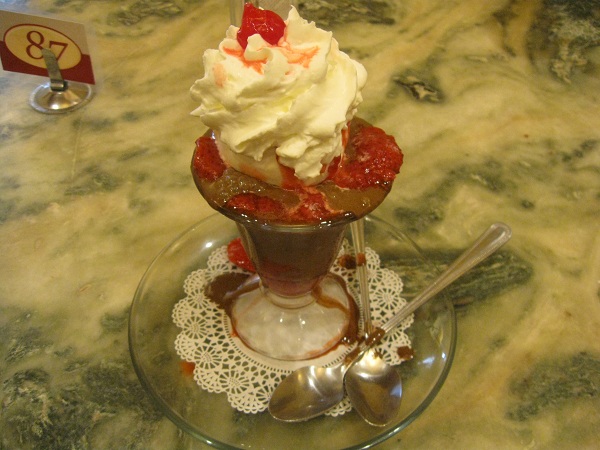 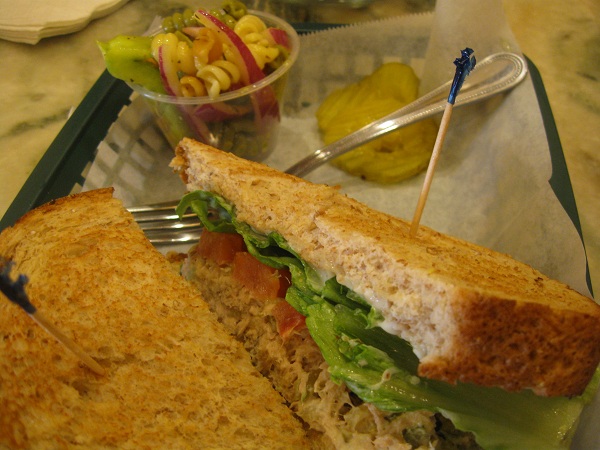 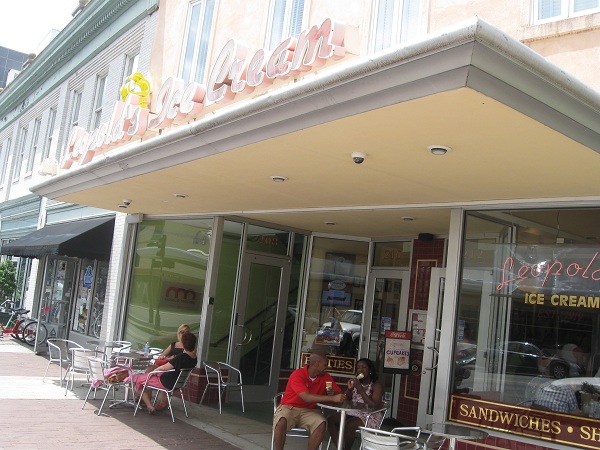 I have to say that the photos are absolutely terrible and not at all representational of how the ice cream looked when I first got it. I have to plead a combination of scatter brain from the heat, combined with juggling baby plus food. The ice cream itself, which is made in small batches according to an old family recipe, is really smooth and creamy, with a good flavor that lingers a little while. The baby approved as well, though he was not happy with being limited to a small handful of spoonsful. I still don’t quite trust his ability to handle dairy. The line at the serving counter looked daunting but really moved quite quickly as there were lots of people behind the counter ready to help indecisive people who needed tastes of several kinds of ice cream before making choices.

Leopold’s has been family-owned since 1919, and it is most unusually only in the second generation of ownership – but they skipped for a little while. The current owners, Stratton and Mary Leopold, were busy with other things. Stratton Leopold was in movies, and when he switched back to ice cream in 2004 he decorated his shop with movie posters and memoribilia from his Hollywood career. It makes for a somewhat eclectic mix – you wonder when you see them what the theme is, because it’s certainly not obvious. Only the most recent posters have his name on them, but he has a poster for every movie he worked up on the walls.

Although there are apparently nephews in existence, they are not as interested as the originals in working the store. Mary Leopold expressed a hope that someone in her extended family of employees would carry the name on, but judging by her energy I’d say that should be quite a while in the future.

The ice cream is excellent and I could easily have gone there every day for a week. The sandwiches are okay, but they’re more there to do exactly what I did, which is to keep from having to go to a separate place for lunch before the treat.