I had hoped that on this most recent trip to south Georgia, we would be able to do a much better job covering the city of Savannah and exploring its restaurants. Unfortunately, we only visited one new place, but it was certainly a terrific one. Marie had originally wanted to spend a couple of hours enjoying some good toddler time at the recently-opened Savannah Children’s Museum, and while they played, the girlchild and I were going to visit a couple of places. Unfortunately, it was raining. This children’s museum is still in its initial fundraising stages and has only opened one area to the public, and it is outdoors. They didn’t want to play in the mud and rain, madly.

So, while the city is full of old restaurants that tickle my curiosity, we all agreed that we would have lunch together at B & D Burgers on Broughton Street, which opened twelve years ago. This is the original location of this small and growing chain, which has three locations in the city, and is named after the sons of the owner, David Tonroe. For Atlantans, it is somewhat similar to our Yeah! Burger, a casual place to get high-end, high quality hamburgers with premium ingredients and a side for about ten bucks a person. The vibe is typical coastal Georgia, laid-back and inviting, with painted cartoon lizards and long benches. And the burgers are just magnificent. We have several excellent contenders in Atlanta that have emerged over the last six or seven years, but I really don’t know that very many people here were serving a burger this good in 2001. 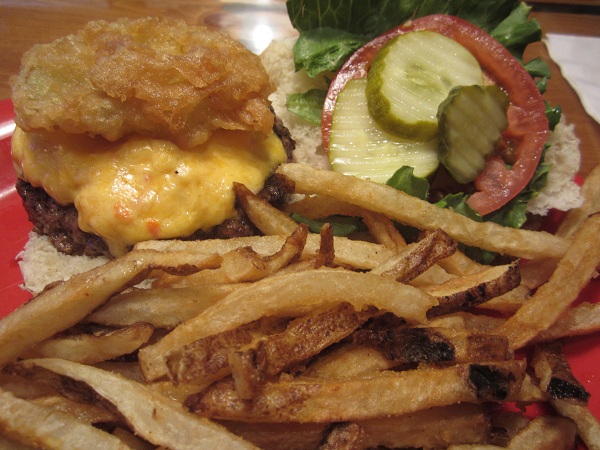 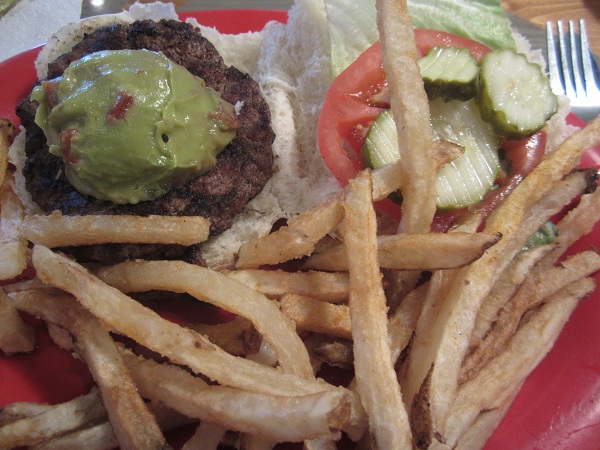 My daughter decided to pass on the burger, however, as she found something on the menu that appealed more. They make a grilled pimento cheese sandwich with fantastic bacon and vine-ripe tomatoes. I said that she picked well until I had a bite of my even better signature Wormsloe Burger. It also has this excellent, gooey pimento cheese with fried green tomatoes. I added lettuce, pickles, and a little mayo and don’t remember a better burger. Our server asked how I’d like it cooked and I answered “as rare as the law will allow” and it was beautifully pink and juicy. Marie had the Abercorn Street, topped with avocado dip, and was also very pleased. We shared the very good fries and applesauce, of all things, and left very, very satisfied. 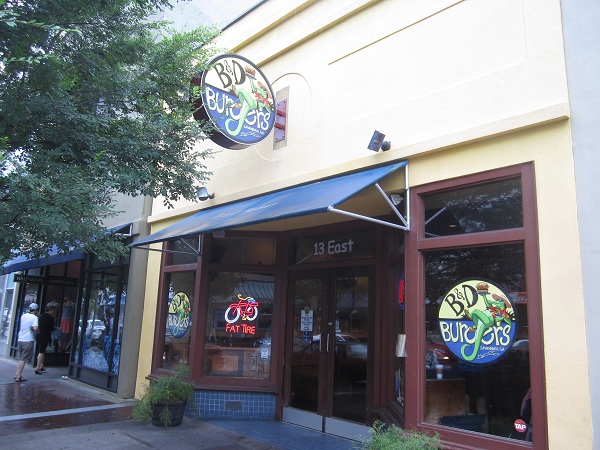 Street parking on Broughton is at a premium, but there are reasonably-priced public decks tucked here and there for people to find. Since we had a bit of a walk through the alternating drizzle, downpour, and sunshine, we found a few other things to do to allow the baby a longer chance to get his wiggles out. The first place that we went after lunch was a vintage clothing store called Civvies. My daughter found a hundred things that she wanted, but settled on just one. Then we went back across the street to Planet Fun, which specializes in collectible toys and video game systems. I have a long-winded anecdote about the Weebles toys of the 1970s that doesn’t translate well to the printed page, but suffice it to say that I very nearly walked out of here with a Weebles Haunted House that I did not need, but boy, howdy, did I ever want.

As I was parking the car, I was pleasantly surprised to see that we were within very easy walking distance of Leopold’s Ice Cream, which Marie got to visit in June of last year, when she and her father came to town to take the baby to the museum. Since my daughter and I weren’t going to be driving around finding another lunch or two, and since I wasn’t blowing mad money on old haunted house toys, I figured we could all go get some ice cream.

Besides, last year, when I read a little more about Leopold’s, I became very curious about their signature tutti-frutti ice cream. Not nearly enough people make that. It is wonderful. We all really enjoyed our scoops, and the service is incredibly good. I was most impressed when a woman came to our table with a pitcher of ice water and paper cups as we were finishing our dessert. 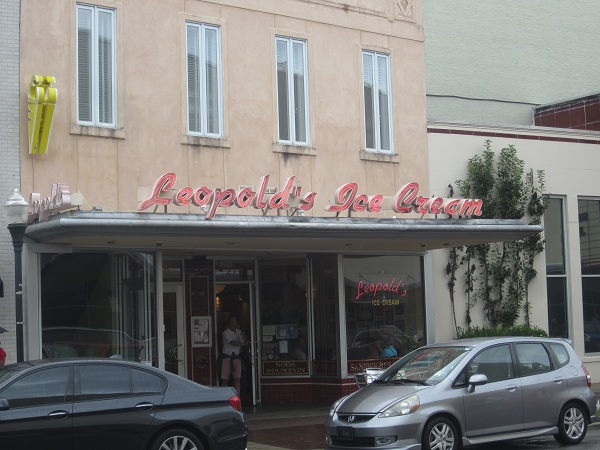 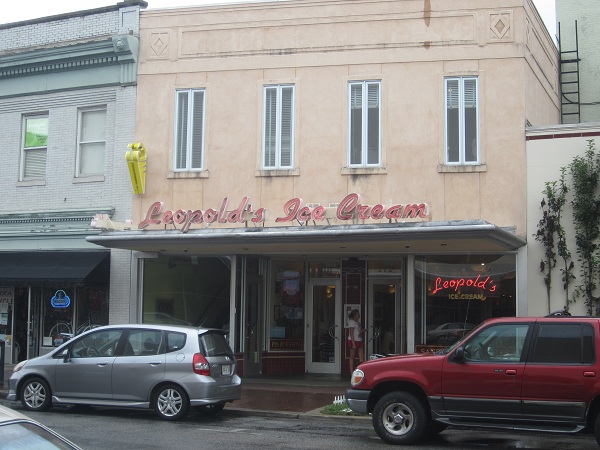 Leopold’s is on a really amazing block that is home to two – count ’em – two classic movie screens. One of them is the SCAD cinema, and the other, around the corner, is an old revival house that was playing Cool Hand Luke that evening. Leopold’s and the cinema are across the street from some of the other SCAD facilities like the library and some studios. I pointed out to my daughter that if she were to attend art school here, she’d have terrific burgers and ice cream, awesome old clothes and toys, and two big movie screens within two blocks. Good grief, if there’s a comic book or record store on this stretch of road, we may all just move down here.

Other blog posts about B & D: