If you were to search deep in the recesses of our blog’s infancy, or, I suppose, if you were to click this link, you’d find that, once upon a time, I was enraptured, enamored and totally in love with this one Indian restaurant in Roswell. It was called Moksha, and when it closed, I was bereft.

In 2010, I made some token stabs at finding a substitute. I had previously learned to enjoy the flavors of Indian cuisines by working my way through several very similar Atlanta-area tuxedo-n-curry joints, judged Moksha the very best of them, and found some pretty good replacements, although nothing as amazing. Then I discovered the very, very different Chai Pani in Asheville, had my mind blown, and didn’t bother sampling Atlantan Indian restaurants for quite some time. In 2012, I made a more concerted effort to see what was available in this city, and found many very good restaurants that were nothing like the old-fashioned tuxedo-n-curry joints, places like Chat Patti and Zyka.

And now Moksha is back. Mangesh Patel has reopened this legend-in-my-mind in the northern suburb of Duluth with a slightly modified name. Moksha Kitchen quietly started greeting lunch guests in May, without a hint of hype from the popular news blogs. The following month, Chloe of Chow Down Atlanta made the first announcement that I saw anywhere, in the form of a very encouraging review (link since dead). I started antsing for a visit immediately, and finally got a trip over to Gwinnett the first weekend in July.

The four of us made it out for their lunch buffet, meeting our friends Vincent and Helen, and Bella Vivere, who has been documenting restaurants in Gwinnett better than most anybody else in the hobby lately, and who had already paid Moksha a visit that had not completely thrilled her. So I went in with a little apprehension. Is it at all possible for this place to live up to my personal hype and memories?

Nope. Oh, it’s mighty good and probably worth a decent drive from anywhere in the northeastern suburbs, but it’s just not quite as mindblowing an experience as I remember it. Perhaps other thrills have dulled its edge, but among traditional tuxedo-n-curry restaurants in the area, it’s still a very satisfying lunch. 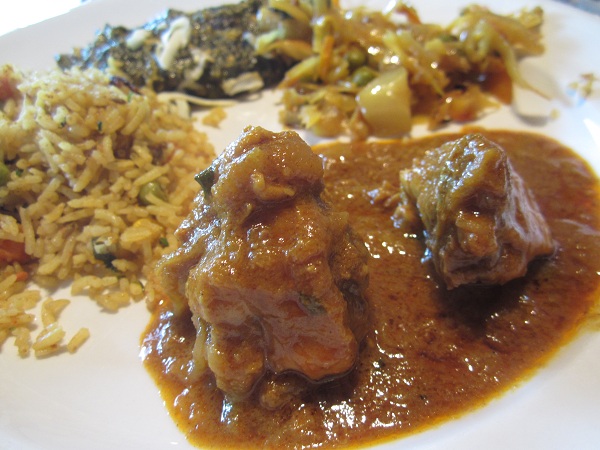 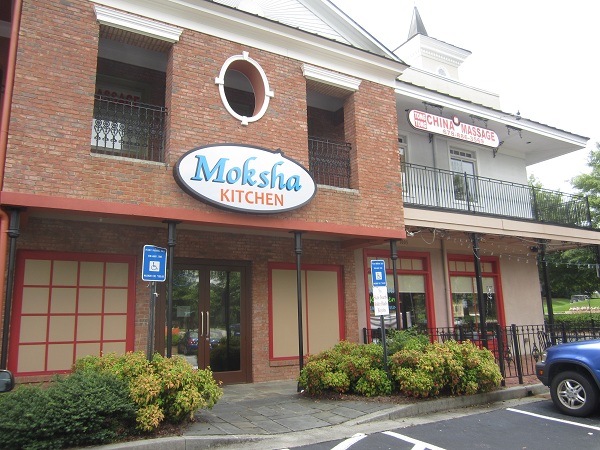 For starters, the lunch buffet at Duluth seems a little smaller than it was at Roswell, and, on this Saturday, it had fewer meats. The ones they offered – a mildly-spiced chicken curry and a medium-spiced goat curry – were pretty good, but they were outshined by the remarkable vegetable dishes. I was most impressed by Mutter methi malai (made from green peas and fenugreek leaves), and the Dal tadka, a yellow lentil stew with garlic and mustard seeds. These were both completely delicious.

I was reminded during our meal of how everybody’s spice receptors are very different at different times with different dishes, and that anybody’s reports of what’s mild, or medium, or very hot, might not be all that useful. For example, earlier this year, Marie and I went with Vincent and Helen to Himalayan Spice on Briarcliff in Atlanta, and I found her vindaloo too darn hot to eat, but just right for Helen. Here, the goat curry that I found to be medium-spiced was volcanic to her. Marie, gamely tackling Indian food yet again despite still finding no great pleasure in it, found the whole darn buffet too spicy and retired to feed salad to the toddler before taking him outside to run on the patio. 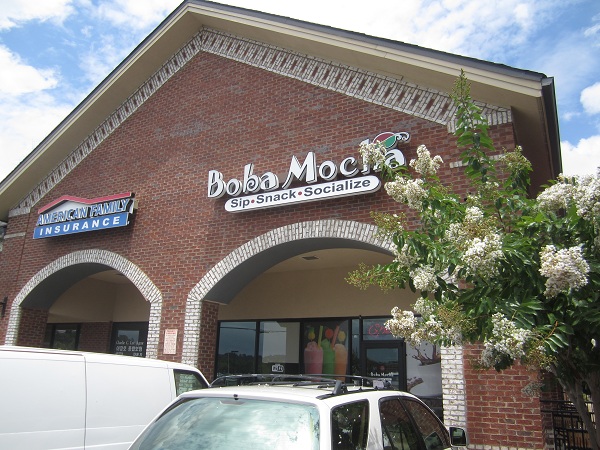 Everybody left a little more pleased than us, and me only selfishly because a simply fine meal wasn’t up to the impossible expectations I laid upon it. We got quick directions to the nearby Boba Mocha, about which I had heard great things, and which promised an excellent milk tea for dessert. Since our daughter had been really good company for the meal – and since she enjoys surprising her friends, who are all adrift in the ‘burbs without parents who will drive ’em across town for odd drink treats, with Facebook photos of her bubble teas – we were pleased to reward her with a big dessert here.

You know, as much as I enjoy the drinks at Sweet Hut and Lee’s inside the perimeter, everything about Boba Mocha, from the terrific drinks to the downright awesome staff, pleased me hugely. This a terrific place for a snack and we were very happy. I had a lavender milk tea (without boba – those I can’t abide), and the girlchild had coconut. The toddler got revenge from the previous evening, when he only got little sips of everybody else’s milkshakes from Sonic. Marie ordered a Young Grasshopper smoothie, made from peach, kiwi, and green tea, and the kid sucked down better than three-quarters of it.