Since I mentioned a few chapters back that I intend to do a better job looking for reliable Indian restaurants in the Atlanta area, I received some recommendations from readers that sound terrific. I intend to visit those in the next month or two, but first, opportunity presented itself and I had lunch at Swapna on Cobb Parkway just outside the perimeter. I really wanted to try this place because, unlike several other places around Atlanta, it gets rave reviews for its buffet lunch. I really did enjoy the buffet at the since-closed Moksha in Roswell a lot more than I thought plausible, and I was keen to try different things at different restaurants.

Swapna has been here since the mid-1990s, but the building is much older. In the mid-1970s, it had been the home of a locally-owned steakhouse called Red Sirloin, which old-timers may remember had a gigantic fiberglass bull positioned out front. For years, this was a Friday night ritual with my family. We would arrive promptly at 6 pm every Friday, and at about 6:03, I started to panic because Wonder Woman would be starting on ABC (later CBS) in an hour and 57 minutes and I did not want to be late.

This was a genuine concern. In the spring of 1978, CBS aired a miniseries called The Return of Captain Nemo starring José Ferrer and Burgess Meredith on Wednesday nights. I missed the final episode because some friend of my parents’ named JD – his lack of a wife baffled me, as it seemed my parents only knew married couples – showed up and insisted we all go to supper at some Italian place in Marietta. I proceeded to make everybody completely miserable about staying out so long that we missed this fool submarine show, and, I imagine the next visit to Red Sirloin had been a genuine trial. They made me miss Captain Nemo, then – my God! – Wonder Woman could be missed, too!

I took every opportunity for the next thirty-three years to remind my father of how I missed the final part of Captain Nemo. In time, I came to realize that missing Wonder Woman was really not an option; Dad wasn’t about to miss an hour with Lynda Carter in that bathing suit and boots, even if she did spend a criminally long time wearing her Diana Prince disguise each week. Intensive anecdotal study, meanwhile, has proven that I was, in fact, the only seven year-old boy in America to have watched the first two episodes of The Return of Captain Nemo, since nobody else has heard of it. The third episode was, presumably, the only network television broadcast in history to receive a 0.0 Nielsen rating and share, which explains why CBS didn’t pick it up for the fall of ’78.

The other thing that I have to say about Swapna is that in the fall of 2004, the kids and I were with friends enjoying a long and leisurely meal at the Steak & Shake across the street, and we watched a fellow in a full-size Elmo costume enter the building by himself. He did not emerge for the ninety minutes, or maybe two hours, that we were there. We concluded that they’d put Elmo in the curry. No wonder it took me eight years to give them a try. 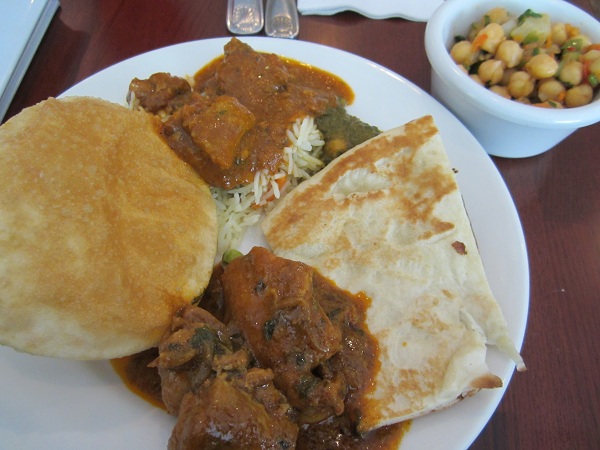 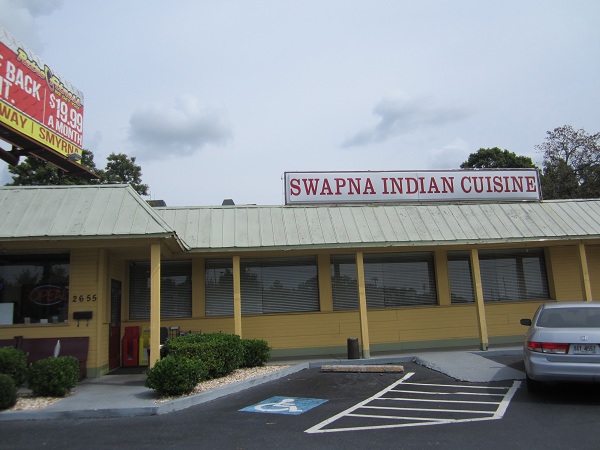 In a surprising contrast to several lunches that I have enjoyed recently at sparsely-attended Indian joints, Swapna was incredibly packed. I arrived between rushes and still had a short wait before a table was freed. When I left, the lobby was completely packed with people waiting.

The lunch buffet is very popular despite some of the dishes disappointing me, and others really satisfying. I particularly enjoyed the chana palak, which is a spinach dish with garbanzo beans. Best of all were some spicy pickled vegetables. Upon reflection, I think that all of the vegetable dishes were more pleasing than the meats, although I did enjoy the creamy butter chicken enough to go back for more.

I enjoyed the opportunity to try lots of different flavors, although that nagging guilt that I always get when I see that there’s a wait kept me from lingering and speaking at length with the servers. Well, that and the servers having no time to talk with anybody since they had so many tables to bus. I enjoyed my visit more than I have enjoyed many Indian places in town, and might give it another try after I’ve sampled some other places.

Other blog posts about Swapna: