Back in August, the children and I had met up with Vincent and Helen and some of their friends at Swapna for a big Saturday lunch. I tweeted my pleasant surprise that they had Chicken 65 on the buffet. I’d never seen that on a buffet before. It was pretty good, too, but not a patch on Zyka’s.

I got a reply from Food Near Snellville, advising that the best Chicken 65 he’s ever had could be found at a place in Norcross called The Mughals. I resolved that I’d have to try that sometime, and then, because I’m contradictory, about six weeks later I had lunch at The Mughals with some friends and did not order it.

I decided to commit myself to hosting and organizing at least six meetups with the invitation thrown out to as many bloggers as I could find, in different parts of the city, on different days, at all sorts of different places. Since I figure Gwinnett County is Bella Vivere’s beat, I wanted to make sure to pick a day that she was free for lunch. So she came, and so did Andy from Burgers, Barbecue and Everything Else, as did Leslie from The Food and Me – these get-togethers were her cockamamie idea in the first place – and we had a terrific lunch. But since half the table ordered the Chicken 65 based on my recommendation – thank heaven it was a success, right? – I decided to buck the trend and have the buffet, which was awesome. 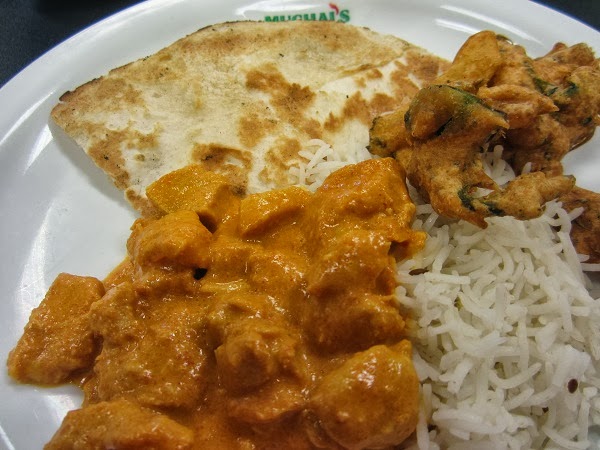 I am amused by the symmetry of starting this chapter by mentioning Swapna, because the butter chicken on their buffet is pretty good and I remember enjoying it greatly. But what The Mughals serves up on their own buffet is immeasurably better. The meat is absolutely succulent and the sauce is creamy and spicy and probably terrible for you, but it tastes so amazingly good. This was the standout of the buffet and I left it really pleased. An okra dish in a light tomato sauce was also pretty good, but the other standout were the best pakoras that I’ve ever had. These were mixed veggies and potatoes rolled in a million-and-one seasonings batter and fried golden brown. I’d have liked to have left with a box of those.

But the Chicken 65. Man overboard, friends. You always get a little antsy about sharing food when a buffet’s in play, but Sandy passed me a bite from her plate. It was so pleasantly spicy, with a terrific afterburn. When we went to pay, I told the proprietor that I thought it was even better than Zyka’s. He thanked me for the compliment and said it was high praise, as he knows that Chicken 65 is Zyka’s signature item. As well it should be; it’s worth driving to Decatur at 90 miles an hour to have a plate of that. But it’s worth driving to Norcross at a hundred miles an hour to have a plate of this.

I’m glad that I had the buffet. It’s a small one, nowhere near as expansive as the gigantic ones at Swapna or Mirch Marsala, with only three meats, three vegetables and pakoras with rice and unbuttered naan. That’s as it should be in a small, unassuming place like this, sort of no-frills, help yourself and kick back on a lazy Friday afternoon. But as much as I enjoyed that butter chicken, the 65 is in a class by itself. Is that enough hyperbole, or are you shutting down your laptop and making your way to the car now?

Other blog posts about The Mughals:

5 thoughts on “The Mughals, Norcross GA”