I’m pretty certain that, after Daddy D’z, there aren’t any more of what we might call the “iconic” Atlanta-area barbecue places waiting for us. It has been on my to-do list for many, many years and, one Thursday last month, I finally made my way over to Memorial Drive, near the state capitol building, to give it a try. It has been what you might call a “seasonal favorite” for quite some time. Its location is perfectly suited to drivers coming to see the Braves at Turner Field, and does most of its business during the baseball season.

The decor is deliberately downmarket, designed as a dump that hosts live blues on the weekends in the first of two rooms that guests enter. Owned by Ron Newman, who moved to town from Chicago, Daddy D’z opened in 1993 and, based on the yellowing press pages that line the inside walls, had its crowning time in the glory during the ’96 Olympics. He met me at the door as I arrived on a Thursday last month and proceeded to load me down with far more food than anybody needs to eat. 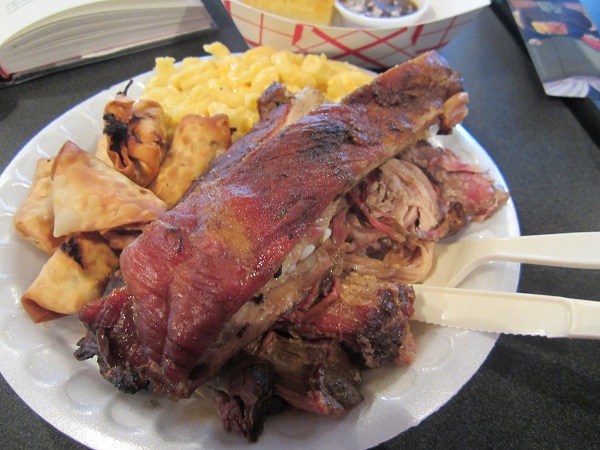 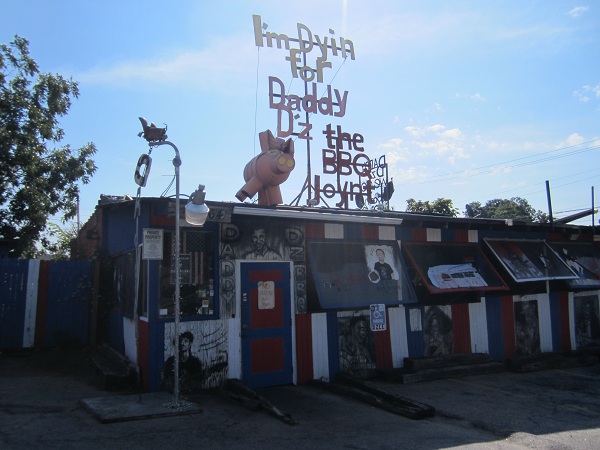 Among the house specialties are what Newman calls Que Wraps. These are little chimichangas of smoked pork, fried until they’re crisp and golden. You’re meant to get six of these on the sampler plate, along with heaping portions of pulled beef and pork and a couple of ribs, and a side, but I ended up with eight alongside this enormous metric buttload of meat. This is far more food than anybody needs to eat at one sitting. Honestly, this could easily feed three.

Equally honestly, I was not thrilled with the pulled beef, but I rarely ever am, and would not have ordered it had it not come with the sampler plate. Everything else was very good. Looking around at some of the many other reviews of this place (below), it’s been suggested that sometimes this place misses the mark, but other times it’s a solid hit, and that’s what I experienced. The mac-n-cheese was very good, and the ribs, pork, and Que Wraps were all very satisfying. The pork had that telltale taste of hickory and oak that is common to this area, and the ribs were not very smoky, but quite tender. For those who keep score, these were the fall-off-the-bone style. I had their spicy sauce on the side. They offer both mild and spicy varieties of a thick, brown, sweet sauce.

I made my way through about two-thirds of my lunch and called it a day. I knew that I had the potential for some very unhealthy eating on the agenda that weekend and didn’t want to overindulge any more than was necessary. Knowing what was in store, I did very well, and for an early supper on Saturday, I was at a sports bar watching the Bulldogs game and simply had a grilled chicken salad and a glass of water. I asked myself whether I really didn’t want a burger, some wings, and some nachos, and I remembered that mountain of meat at Daddy D’z and said “some other time.”

Other blog posts about Daddy D’z: