For all our talk about trying new things and visiting new places, the honest truth is that, were circumstances entirely within my control, I would probably eat at Bell Street Burritos at least once a week if not more frequently. Sadly for me, and fortunately for our readers who presumably wish to read about more places than just the same one over and over, we live a really inconvenient distance from them. After a quite late morning at home running errands and catching up with my mail, I found myself wanting Bell Street again, but not really wanting to drive the 48 mile round trip to eat there. We may talk a lot about the suburbs being better than many credit them, but the price we pay for being within a hop, skip and jump from Brandi’s World Famous Hot Dogs is that we’re a disagreeable distance from several other wonderful favorites.

So, since I was craving a burrito, but unwilling to spend the time and the gasoline to drive all the way back down to the Old Fourth Ward, I decided that the next best thing would be to find something new and document it. I found it in a strangely surprising place. Three months previously, Hollie Guacamole on the square in Marietta had closed, after a longer run than I thought possible. The space sat vacant until a new burrito place opened there. It’s called, simply, Big Burrito on the Square, and it’s doing something very unusual, I think: trying to succeed in the exact same space where a very similar concept had failed. 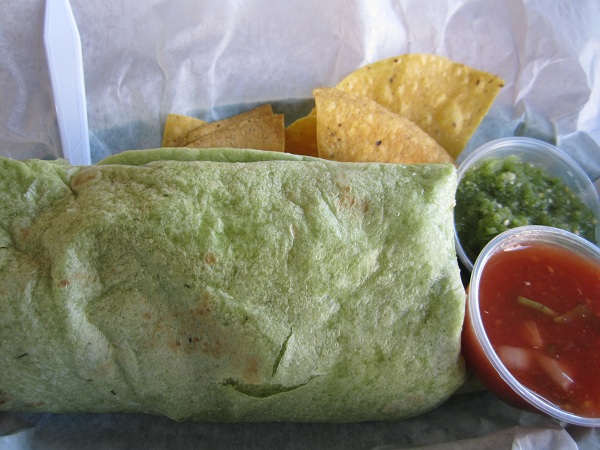 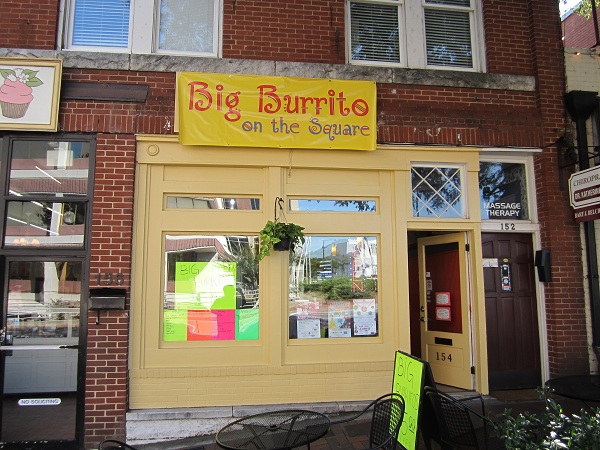 I was pleased by how simple they keep everything here. The prices are very low, just $5 for a chicken burrito, and then guests pick their fillings from a long menu. There do not appear to be any “premium” prices for any special ingredients. Locally, the market is led by Moe’s Southwest Grill, with its laundry list of cute-named rolls that require guests to decide what they want to pay up front. Here, with the menus written in sharpie on poster board, things are much simpler.

The food is, unsurprisingly, not a patch on Bell Street, but it’s pretty good nevertheless, and better than many of their competitors. Their secret weapon is probably their salsa verde, which packs a surprisingly spicy kick. The red sauce is nothing special, but I would gladly drown a chicken burrito in this green sauce again. This is a fine little place for the attorneys and jurors taking lunch breaks in the Cobb County courthouses, but then again, we said that about Hollie Guacamole and it only lasted two years. Hopefully, Big Burrito has a longer life ahead of it.

3 thoughts on “Big Burrito on the Square, Marietta GA (CLOSED)”