The road took me north, as hoped, to Clemson, which, as college towns go, is a little underappreciated if you ask me. Sure, it’s no Athens, Chapel Hill, Morgantown or Oxford, but it’s a darn sight more impressive than Starkville. Plus, the campus is a real beauty. 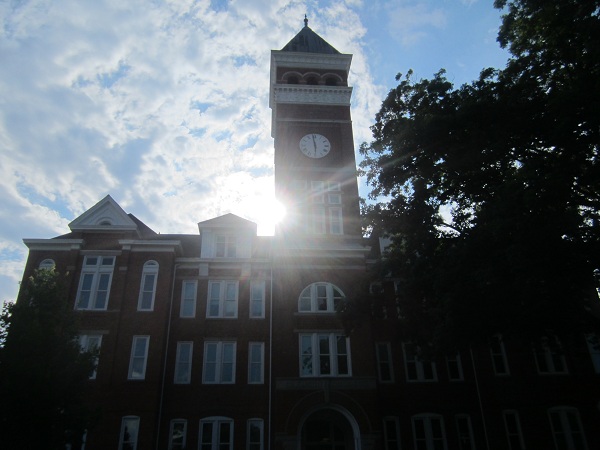 So last year, the SEC expanded by absorbing Texas A&M and Mizzou from some other, inferior conference. Well, welcome aboard and we’re glad to see y’all, but nobody really wanted this, did they? You look at all the really good schools who are actually in the “south” and the “east” of this country, and the SEC expanded by going… west? Now, once the Texas A&M thing was a done deal, pretty much everybody turned their eyes on the Carolinas, Georgia and Florida to see what would happen next, or, if you will, which ACC school was going to join us. Virginia Tech was the odds-on favorite for a while, and every time the rumor mill said it would be Mizzou, nobody listened.

Now, while I really wanted a school from North Carolina, my thought was really that it had to be one of three: Florida State, Georgia Tech or Clemson, just because of the intense and wonderful rivalries that those schools have with Florida, Georgia and South Carolina respectively. I figured that it probably wouldn’t be Tech. The Yellow Jackets had their chance in the auld Southeastern Conference but got so tired of being whipped by Bama in the 1960s that they left. I can’t see how anything really would have changed since. I liked Clemson because, in the 1970s and 1980s, before the SEC expanded to twelve teams and the calendar filled up some, Georgia and Clemson had an awesome rivalry, and everybody wishes that we’d play them every year instead of the West Presbyterian School for the Deaf or whatever mook team gets on our calendar for the home opener. Clemson it would certainly have to be. But no, it was some other Tigers, in some remarkably inconvenient middle-of-nowhere place like Columbia, Missouri. Like Fayetteville, Arkansas wasn’t far enough out of everybody’s way or something.

So I rolled into town via their wonderful campus, found the stadium, and took a walk and snapped some photos. It was a really nice day for it. In time, I got back to the car and made my way through the student-oriented strip of restaurants, bars and school-colored tchotchkes that the locals call “Tiger Town,” found the hotels, checked into a room and showered off the miles of road. Eventually, I got dressed and parked in one of the Tiger Town decks and went looking for something to eat. 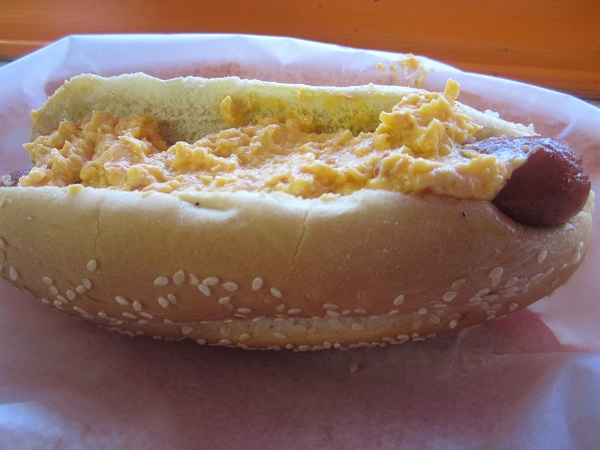 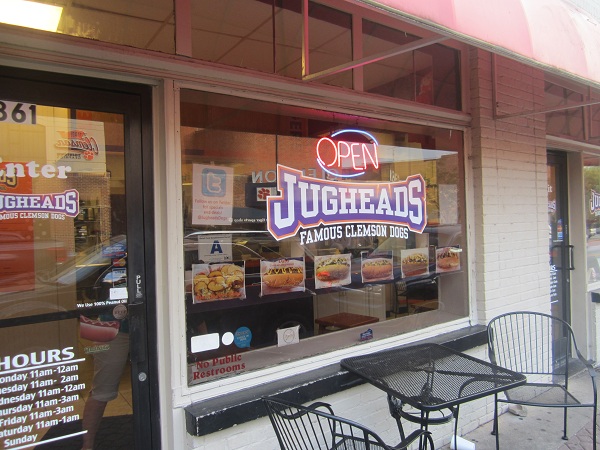 At 7.45 I stopped at Jugheads Famous Clemson Dogs. A Tigers graduate, Keith Jennings, opened this little storefront in 2011 in time to welcome back the ’81 national champion team to campus for their 30th anniversary. It was dead slow when I arrived. There was just one twentysomething girl working the register and a friend visiting her, and they had their music turned up to blistering and silenced it when I stepped in. I get the feeling that this place is busy for lunch and for late-night snacks – they are open ’til three on weekends helping the inebriated sober up – but not so much during suppertime.

Jugheads serves Nathan’s franks on hoagie rolls, and I decided that one would make a good appetizer. Their menu includes 22 dogs named after Tigers players and coaches. The Hoover, named for the volleyball coach, comes topped with pimento cheese, so that’s the one that I had. It would be a shame, after all, to visit South Carolina and not have some homemade pimento cheese! Other Clemson dogs include The Frank Howard (yellow mustard, onions and relish), The Rod Williams (barbecue sauce, bacons, onions and spicy mustard), The Bostic Brothers (pulled pork, barbecue sauce, slaw and crispy onions) and The Dwight Clark (grilled onions, bacon and bleu cheese). The Chicago-style dog here is called The Leggett, after the university’s baseball coach. Wikipedia says he was born in Maine. Maybe he just likes Chicago franks. 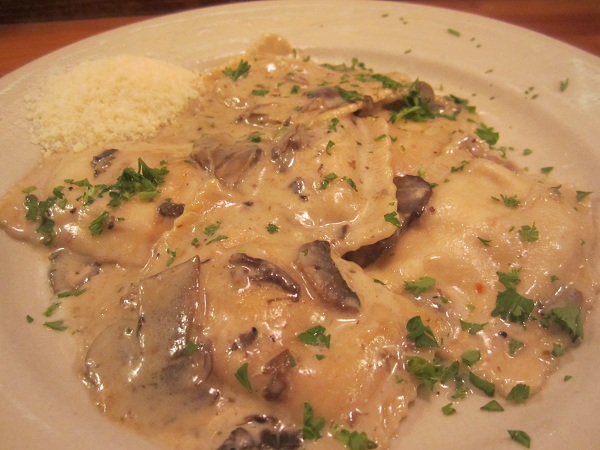 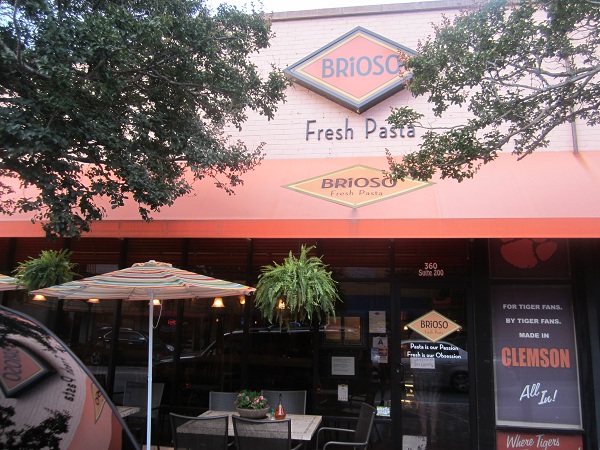 I went back and forth about where I’d like to go next. Loose Change, an eclectic little place that seems to be one part sports bar and one part gastropub, almost won out, but I selected Brioso instead just because most everything I was eating on this trip was barbecue, burgers or dogs, and perhaps retiring with my book to someplace a little more upscale would be nice. Since 2008, Brioso is probably the restaurant that Clemson freshmen “take their parents” when mom and dad come to visit. I enjoyed the most expensive meal of the road trip here, a plate of smoked gouda and roasted red pepper ravioli in funghi mushroom cream sauce, and it only came to about $10.

Atlantans will find this restaurant very, very similar to our Figo. If Brioso was any more like Figo, somebody’s going to be making Taco Cabana – Two Pesos arguments about trademark infringement. Brioso even borrowed the conceit of identifying orders by way of a decoratively-painted pepper mill. I chuckled at the cheek and settled in to a really nice and filling meal. The sauce was really flavorful and made me curious to sample some of the kitchen’s other concoctions. They keep fourteen sauces on the menu regularly, and rotate in a few others as specials, so the options here for the seven different raviolis and eleven pastas are pretty high. 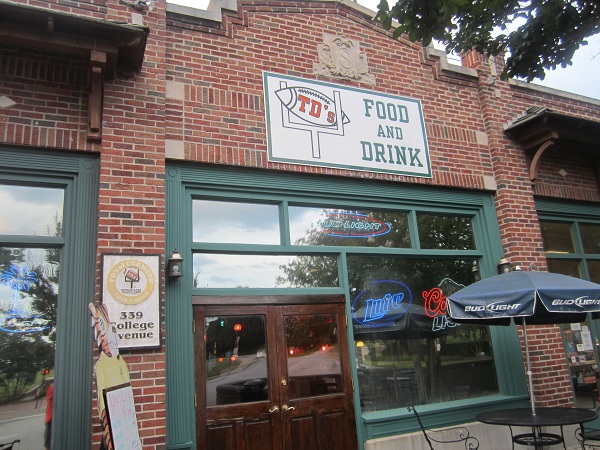 The hot dog and the pasta were enough to fill me, but, having finished the Charles Finch novel that I’d been reading all day at Brioso, I wanted to actually converse with people and have a beer or three. I made my way to TD’s, which opened in 1988 on the prime corner of real estate facing campus. If only I was still hungry, they offer one of the best specials of any sports bar, anywhere: a quarter-pound burger, fries and a draft beer for $5 after five. I saw some baseball, I heard some campus gossip, I informed some incredulous kid that Clemson actually does have public beach access to its river, and upon learning about our awesome hobby of driving around and eating and writing about it, some fellow affirmed that ours was the finest hobby he’d ever heard of and bought me that third beer.

All this time, Marie was down in the Golden Isles with the baby. I very much doubted that anybody was buying her beer in sports bars, but in the next chapter, she’ll tell you what she was up to instead.